It’s been a really active time for the Earth Observatory and volcanoes. In the past three weeks, we’ve posted images of a night-time eruption of Shiveluch, ongoing activity at Puyehue–Cordón Caulle, daytime activity at the Kizimen Volcano, and my own favorite, a brand new island in the Red Sea. And those are just the images we published!

In recent weeks, we had a good shot of activity at Kilauea, but we skipped it since it only had Halema’uma’u activity — which is much like previous images and not the new ocean entry point, which we’ve yet to glimpse in cloud-free satellite imagery. We received an excellent ALI scene of the submarine El Hierro volcano (which we published) and then the next day we received an image of the same volcano from Landsat 7  (which effectively got scooped by ALI).

Another of the moderately recent and interesting images of volcanoes we didn’t use is a very nice ALI shot of the Cerro Hudson volcano in Chile.

We do have a good reason for not using the image. Notice the volcanic activity? Yeah, we didn’t see anything either. What makes this image interesting (to me anyway) is that just two weeks earlier, it looked like this: 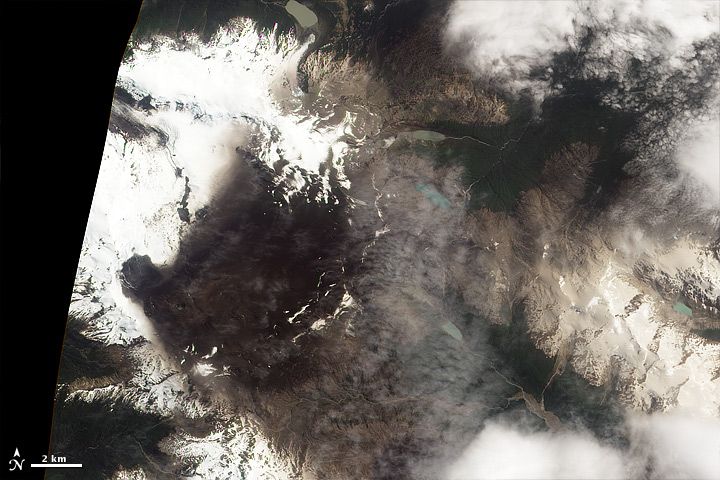 We did publish that one. There’s actually not much in the way of activity in that one either, but in the published image, you can see a lot of ash that’s fallen on the ground from activity in October at the volcano.

Just two weeks later, with no new activity, almost all the ashfall seems to have “disappeared.” Fresh snow fell and covered much of it. Also, we got a much better shot with ALI of the volcano, getting a very nice view of the entire caldera, the glacier draining it out of the northeast, and forests in the alpine valleys. The ashfall was nowhere near as extensive and damaging as the Puyehue eruption, which at one point spewed out ash that circled the globe.

This entry was posted on Tuesday, January 17th, 2012 at 1:33 pm and is filed under Uncategorized. You can follow any responses to this entry through the RSS 2.0 feed. Both comments and pings are currently closed.

4 Responses to “Parade of Volcanoes”