Perseids or Sporadic Meteors? Maybe Both

On August 13, 2016, we published an image and video showing meteors streaking across the night sky. The perspective is a new one. Instead of looking up from the ground, the camera recorded the action from the vantage point of the International Space Station (ISS). In case you missed it, you can see the image and read the full story here. The video is reposted below.

At 6 and 16 seconds into the video, bright meteors dash across the sky over Pakistan. The video was acquired a few days before the annual Perseid meteor shower reached its peak. But as one reader pointed out to us via email, only one of these meteors can be associated with the shower. The reason? The view from orbit shows them travelling in different directions. 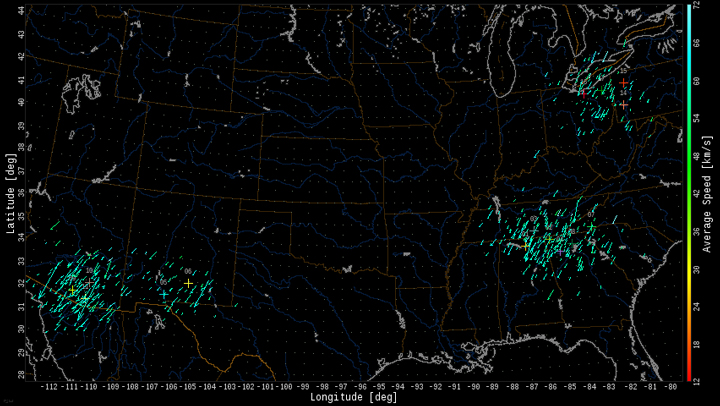 “Note how their paths all move from top right to bottom left,” said Bill Cooke with NASA’s Meteoroid Environments Office. “This is what would be seen from the ISS or another space platform.”

Showers look vastly different to a person standing on the ground looking up at a wide view of the night sky. From this perspective, meteors associated with a shower can appear to radiate outward from a central point called the “radiant.” The central point in the night sky is linked to the shower’s name; the Perseids, for example, appear to stem from the area of sky near the constellation Perseus.

The phenomenon, however, is an illusion of perspective. The illusion has been compared to flakes that appear to radiate outward as you drive through a snowstorm, or parallel train tracks that appear to converge in the distance.

“The perspective from orbit is somewhat different, because you are not looking at the entire sky, just a small fraction of the total area,” Cooke said. “In this case, meteors from a particular shower will be all moving the same direction.”

So which meteors viewed from orbit are belong to a particular shower, and which are “sporadic meteors?” That’s the type of information that will ultimately be gleaned from the diffraction grating on the space station’s Meteor camera. It will collect spectroscopy data that can tell scientists about a meteor’s composition, which can ultimately be related back to the parent body—comet Swift-Tuttle, in the case of the Perseids. 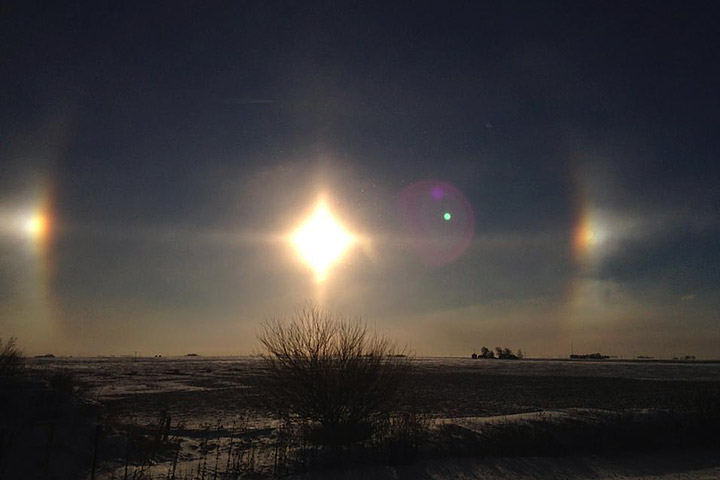 Halos have a long and rich history in religious art, usually symbolizing the presence of someone or something divine.  In the physical sciences, the beautiful displays of light are a sign of something more ordinary—the presence of hexagonal, plate-shaped ice crystals that make up cirrus clouds.  As gravity pulls the ice crystals downward, their faces become horizontal with the ground and they function as dispersive prisms, breaking sunlight into separate colors and leaving rainbow-like ice crystal halos in the sky.

Sundogs are one of the most common types of ice halo. They occur when light rays enter the side of an ice crystal and leave through another side inclined about 60 degrees to the first. (See Atmospheric Optics for a good diagram that illustrates the process.) Sundogs are most easily seen when the Sun is low in the sky; the halos occurring on either side of it at about 22 degrees. The part of a sundog closest to the Sun always forms a layer of red, while greens and blues form beyond that. Sundogs are visible all over the world and at any time of year, regardless of the temperature at the surface. For more imagery of sundogs and other optical phenomena (such as sun pillars, circumhorizonatal arcs, and parhelic circles), it’s worth checking out the archives of Earth Science Picture of the Day.

In the last few weeks, we’ve had a number of readers send us their photographs of sundogs.  The image above was taken by Nina Garcia Jones; the image below comes from Isa DeSil. Thanks for sending the photos our way. To the rest of our readers: keep your interesting photos of atmospheric, meteorological, or geological phenomena coming. We’ll occasionally post the best images on this blog, and we’ll do what we can to help explain the science behind them. 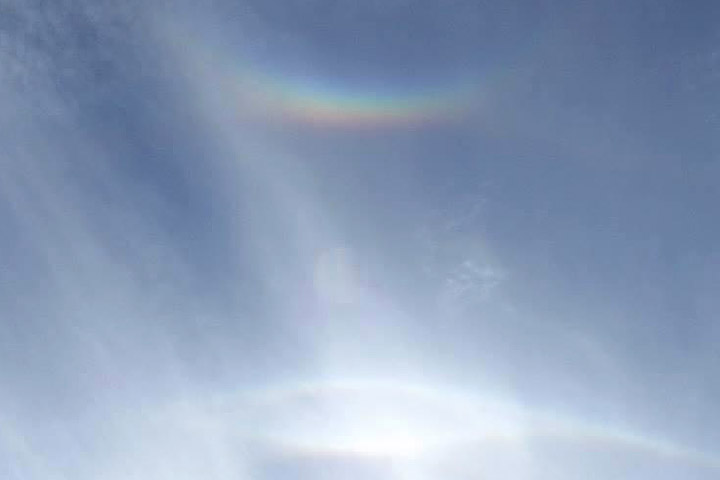