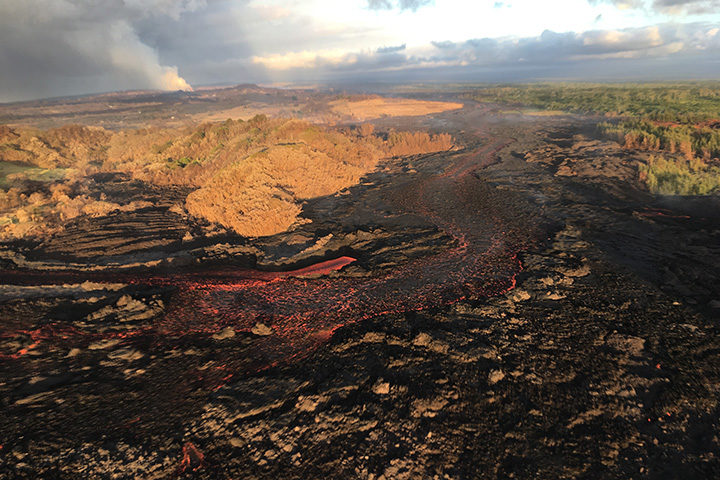 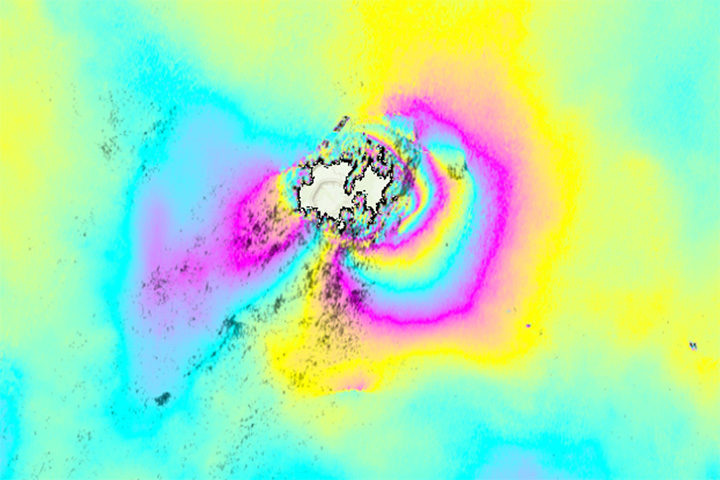 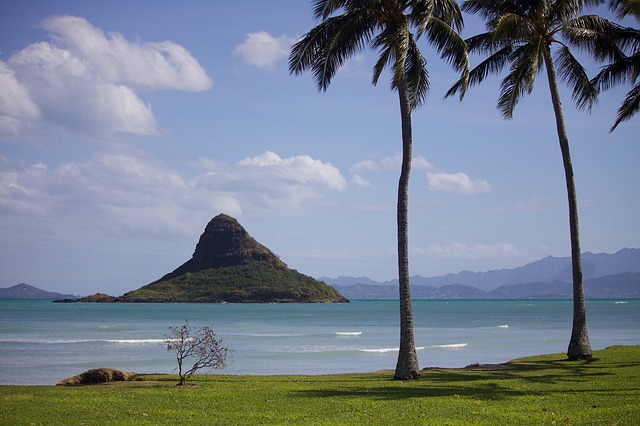 Looking at Earth from space every day, we notice that nature takes on some curious shapes. (We have found, for example, features that resemble every letter of the alphabet.) The landform in the image above, which looks a lot like a human ear, is actually Bogoslof Island—a volcano in the Bering Sea that has been erupting in recent weeks. But the island didn’t always have an ear-like shape, and it might not look that way in the future.

Bogoslof has been erupting since mid-December 2016. We wrote about it a few weeks ago when satellite imagery showed a plume of steam and ash ejected from the volcano’s vent. Much of the volcano was (and remains) under water, with only a small part of the volcano’s top rising above the surface. Interaction of the vent with seawater was the reason that the plume contained so much steam. But by the end of January 2017, things had changed. The image above, from the Alaska Volcano Observatory (AVO), shows the island’s new shape after an eruption on January 30-31.

The image was described in more detail by Dave Schneider on the AVO website:

“Freshly erupted volcanic rock and ash have formed a barrier that separates the vent from the sea. This is the first time this has been observed since the eruptive sequence began in mid-December 2016. The vent is below sea level, and erosion of the ash deposits by wave or eruptive processes would allow sea water to flow into the vent again.”

Something Swirling in the Sea

Almost every volcano is interesting from a scientific perspective, but there are just too many eruptions for us to cover every single one. Instead we tend to focus on eruptions that have the potential to affect people. Or, occasionally our satellites return images that simply look so unique that we find the time to cover them. The plume recently ejected from Alaska’s Bogoslof Volcano was noteworthy for both reasons.

Bogoslof, which has been erupting since mid-December 2016, gave rise to a compelling two-tone plume. Are materials being ejected from a vent that is still under water? (Most of the volcano is below the surface of the sea.) The volcano’s interaction with seawater explains the white steam. But if the vent is not yet above water, then how did such a large, dark plume of ash reach so high in the atmosphere? Scientists at the Alaska Volcano Observatory continue to monitor the remote volcano and perhaps answers will be forthcoming as the eruption evolves.

Also intriguing are the swirls of blue visible in the image above. The Visible Infrared Imaging Radiometer Suite (VIIRS) on the Suomi NPP satellite captured the image on January 7, 2017. My first thought was that the color was caused by a bloom of phytoplankton. The milky blue color looked about right. And iron from eruptions have previously been shown  to provide the nutrients needed for blooms to flourish. But when I asked the experts, the general consensus was that while you can’t rule out a bloom, there was another more likely explanation for the swirls.

“Phytoplankton don’t normally bloom in the Bering Sea during winter because there’s not a lot of sunlight and because winter storms deepen the mixed layer which also keeps the plankton more in the dark. Wave action can resuspend bottom sediments, and that may be happening farther east along the Aleutian chain in the January 7 image where the water is relatively shallow. Bogoslof Island is beyond the shelf break, however, so bottom resuspension is less likely. Ash in the water seems most probable…. I wouldn’t expect the Bering Sea to be nutrient limited in the winter, so I don’t expect an ash-based phytoplankton boost.”

In short, the swirls are probably ash in the water. The phenomenon is not unprecedented. We have previously published images of the occurrence here and here. But as Kuring reminds us, “the only way to know for sure would be to sample the water directly.”

It’s been a really active time for the Earth Observatory and volcanoes. In the past three weeks, we’ve posted images of a night-time eruption of Shiveluch, ongoing activity at Puyehue–Cordón Caulle, daytime activity at the Kizimen Volcano, and my own favorite, a brand new island in the Red Sea. And those are just the images we published!

In recent weeks, we had a good shot of activity at Kilauea, but we skipped it since it only had Halema’uma’u activity — which is much like previous images and not the new ocean entry point, which we’ve yet to glimpse in cloud-free satellite imagery. We received an excellent ALI scene of the submarine El Hierro volcano (which we published) and then the next day we received an image of the same volcano from Landsat 7  (which effectively got scooped by ALI).

Another of the moderately recent and interesting images of volcanoes we didn’t use is a very nice ALI shot of the Cerro Hudson volcano in Chile. 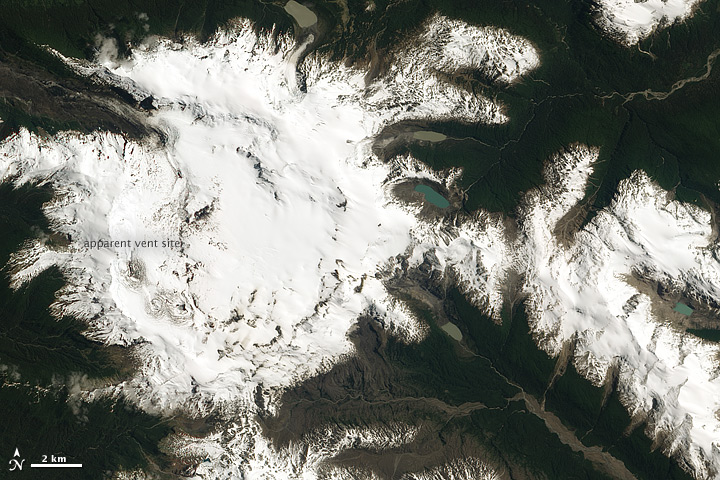 We do have a good reason for not using the image. Notice the volcanic activity? Yeah, we didn’t see anything either. What makes this image interesting (to me anyway) is that just two weeks earlier, it looked like this:

We did publish that one. There’s actually not much in the way of activity in that one either, but in the published image, you can see a lot of ash that’s fallen on the ground from activity in October at the volcano.

Just two weeks later, with no new activity, almost all the ashfall seems to have “disappeared.” Fresh snow fell and covered much of it. Also, we got a much better shot with ALI of the volcano, getting a very nice view of the entire caldera, the glacier draining it out of the northeast, and forests in the alpine valleys. The ashfall was nowhere near as extensive and damaging as the Puyehue eruption, which at one point spewed out ash that circled the globe.