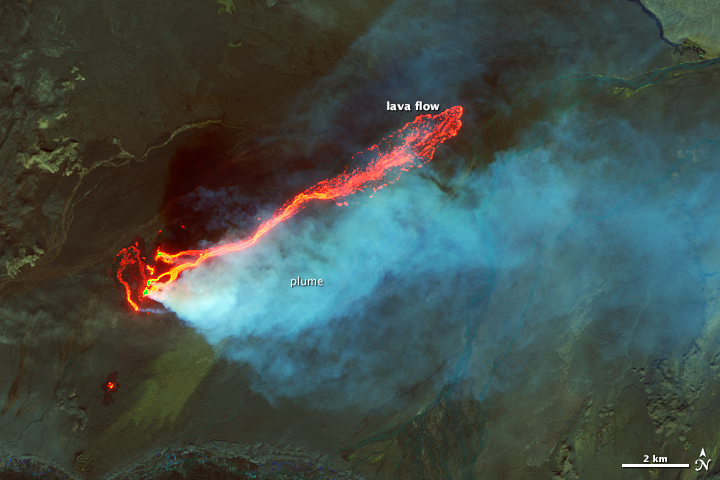 On September 6, 2014, the Operational Land Imager (OLI) on Landsat 8 captured this view of the eruption.

In some ways, the ongoing fissure eruption at Holuhraun lava field in Iceland is an ideal one. Unlike the lava pushing through the Hawaiian village of Pahoa, Holuhraun’s lava is nowhere near any towns or villages. And the eruption has had little effect on air traffic–unlike the Eyjafjallajokull eruption in 2010--because Holuhraun has produced little of the volcanic ash that can damage propellers and gum up engines.

What Holohruan has produced in vast quantities is lava. As a stream of eye-popping field videos—and satellite images—have shown, lava has gushed from Holuhraun almost continuously since late August. Now covering more than 70 square kilometers and filling a volume of one cubic kilometer, Holuhuraun has proven to be Iceland’s largest effusive eruption since 1784.

Holohruan also has been a reliable source of sulfur dioxide, a colorless but toxic gas present within magma. In addition to triggering health problems if inhaled, sulfur dioxide can lead to acid rain and it can react with other substances in the air to produce sulfate aerosols that cool the atmosphere by deflecting sunlight.

Fossil-fuel burning releases sulfur dioxide, but volcanoes do so on a grander scale. Nature reported that an average of 35 tonnes of sulfur dioxide are streaming from Holohuraun each day, more than twice the amount that all of Europe’s factories produce in the same period. “Those levels of sulfur dioxide emissions are quite typical—even low—for an erupting volcano,” said Simon Carn, a volcanologist at Michigan Technological University. “The most interesting aspect of the Holuhruan eruption is its duration. It could go on from months, so the total sulfur dioxide emissions could end up being large.”

In at least one case, gases from Holuhruan have entered the atmosphere with remarkable style. On September 3, engineers with Nicarnica Aviation were monitoring the eruption from the ground with an infrared camera. The camera is designed to detect ash, but they ended up capturing a view of something unusual: a spiraling plume that was likely dominated by sulfur dioxide and other gases. The structure was reminiscent of a dust devil, a small, rotating column of air that forms when one part of a surface heats up much faster than the surrounding area.

In the video below, colors correspond to the temperatures observed by the camera. Red depicts the hottest temperatures, yellow moderate temperatures, and blue the coolest. “The general mechanism is probably the same as that for dust devils, but in this case the funnel is most likely filled with sulfur dioxide, gas, and volcanic ash,” Prata told New Scientist.