The New UN Climate Report in One Sentence

"The key thing to remember from this report is that it's clear that the best time to have reduced emissions was 25 years ago," @ClimateofGavin of @NASAGoddard/@GISS tells @WmBrangham. "But the second best to reduce emissions is right now." pic.twitter.com/ndMIzRSS0t

In October 2018, the Intergovernmental Panel on Climate Change (IPCC) released yet another sobering report about the planetary disruption happening because of all the carbon human activity puts into the atmosphere.

Many parts of the world are already seeing rising sea levels, hotter temperatures, more extreme precipitation and droughts, more acidic oceans, and faster rates of extinctions, the scientists said. And without dramatic reductions in carbon emissions to keep warming below 1.5 degrees Celsius, the problems are going to get far worse.

In just one sentence, Gavin Schmidt, director of NASA’s Goddard Institute for Space Studies, captured the essence of the report. “The key thing to remember is that it’s clear that the best time to have reduced emissions was 25 years ago,” he said during an interview with PBS News Hour. “But the second best time to reduce emissions is right now.”

Like any good scientist, Schmidt is always quick to give credit where credit is due. In this case, he noted that what he said on television was a riff on something that renowned Kenyan marathoner Eliud Kipchoge once said. “The best time to plant a tree was 25 years ago. The second-best time to plant a tree is today,” The New York Times quoted the marathon world record holder as saying.

If you are wondering what the IPCC authors based their findings on, there is no shortage of information to explore. Each chapter of the report has a supplementary information section with dozens of references that detail the evidence the scientists used to draw their conclusions.

For more details, the IPCC also put together a succinct summary for policy makers, a press release, headline statements, and FAQs. Also, below are a few other good resources if you’re looking to understand some of the basics about climate change. 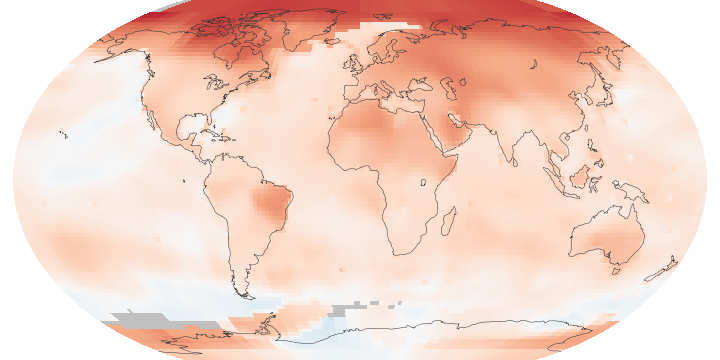 According to an ongoing temperature analysis conducted by scientists at NASA’s Goddard Institute for Space Studies, the average global temperature on Earth has increased by about 0.8° Celsius (1.4° Fahrenheit) since 1880. Two-thirds of the warming has occurred since 1975, at a rate of roughly 0.15-0.20°C per decade. Read more about this map here.

This entry was posted on Friday, October 19th, 2018 at 10:19 am and is filed under Climate. You can follow any responses to this entry through the RSS 2.0 feed. Both comments and pings are currently closed.

5 Responses to “The New UN Climate Report in One Sentence”