The Sounds of Satellites 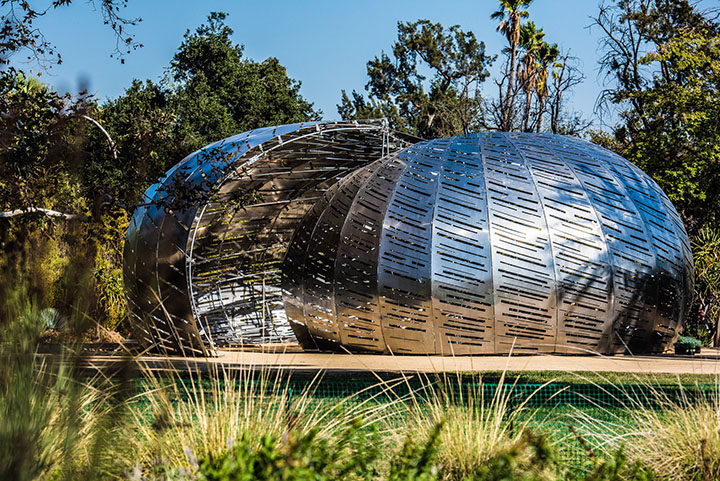 Sure, space may be silent, or at least absent the sound waves that human ears can hear. But put that aside for a moment, and try to imagine the sound of a satellite orbiting hundreds of miles above Earth’s surface.

Now imagine 19 sounds for 19 Earth-observing satellites — the murmur of ocean waves for a spacecraft that studies the oceans, or the howl of winds for one that studies hurricanes. Then swirl all of those sounds into a shell-shaped silver sculpture that looks like something from a sci-fi film.

Put the shell at the Huntington Library in southern California, walk inside, and you have Orbit Pavilion — an immersive piece of art and science communication designed to envelop people in sounds that represents the orbital movements of NASA’s fleet of Earth-observing satellites.

Dan Goods and David Delgado, artists working at The Studio at NASA Jet Propulsion Laboratory, initially developed the sound concept. They commissioned sound artist Shane Myrbeck to compose the soundscape, and Jason Klimoski and Lesley Chang of StudioKCA to envision and design a form.

“The piece is in two parts, each with one sound following the path of a satellite. One section demonstrates the movement of the satellites by compressing a day’s worth of trajectory data into one minute, so listeners are enveloped by a symphony of 19 sounds swirling around them. The other section represents the real-time position of the spacecraft: each satellite currently in our hemisphere will “speak” in sequence, and when a sound is playing, if a listener points to the direction of the sound, they are pointing to the satellite orbiting hundreds of miles above us….These satellites are all part of Earth science missions, studying our atmosphere, oceans, and geology — they are helping us better understand how our planet is changing, and potentially how we can be better stewards of it. In that way I see them as kind of sentinels or protectors.”

The result, as Myrebeck had hoped, is both enveloping and comforting.

Information about the orbits of 17 satellites and two sensors on the International Space Station feed into the Orbit Pavilion. Image Credit: StudioKCA

For a deeper dive into the diversity of the data these satellites collect, try searching a satellite’s name on Visible Earth. Or browse NASA Earth Observatory’s global maps sections and Image of the Day archive.

For instance, the map below helped me understand our planet a little bit better. It depicts more than a decade of cloudiness data as observed by the MODIS sensor. Blue shows areas where clouds were infrequent; white indicates areas where they were common.

Image Credit: NASA Earth Observatory, based on data from MODIS.

This entry was posted on Thursday, June 28th, 2018 at 3:56 pm and is filed under In Case You Missed It, NASA News. You can follow any responses to this entry through the RSS 2.0 feed. Both comments and pings are currently closed.

One Response to “The Sounds of Satellites”