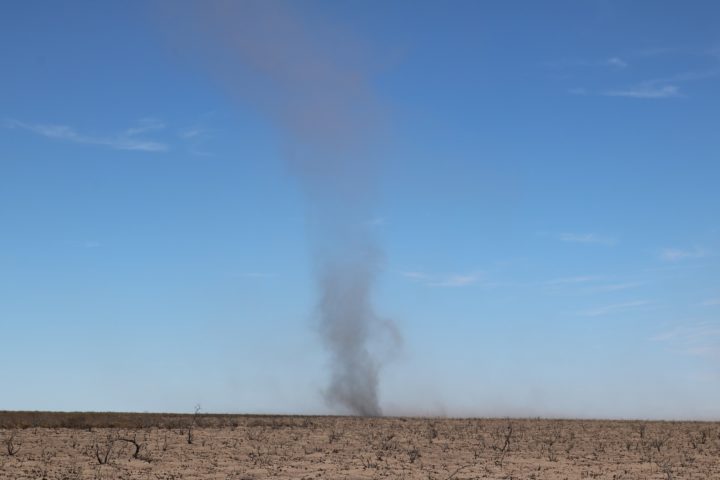 Dozens of wildfires blazed along the Atlantic coast of Argentina coast last winter. One of them left behind a massive burn scar near the Valdez Peninsula. When we wrote about the fires last month, we were unable to say with certainty whether the plume rising off the burn scar was airborne ash or dust. A quick recap from our article:

This part of Argentina’s coast is sparsely populated, arid, and covered in scrubby undergrowth. The closest city is Puerto Madryn, more than 30 kilometers (20 miles) from the burn scar. Due to this remoteness, it is difficult to verify the composition of plumes.

At the time, Santiago Gassó, a NASA scientist who studies the global transport of ash and dust, gave us his best guess:

While Gassó believes ash caused this plume, it is possible that finely ground rock and soil dust also could have become dislodged by the fire. Vegetation and roots (which usually hold the soil in place) would have been removed by the fire, making it easier for the strong regional winds to sweep dust off of the land.

Since then, a reader has written to us with more details. Luciano Javier Avila, a biologist with the Patagonian Institute for the Study of Continental Ecosystems, walked around the site just days after the fires and took photos of the burned area. He confirmed that the cloud was, in fact, dust. Strong winds in January and February caused dust plumes visible from Madryn.

The fire highlights the importance of plants in this semi-arid region, according to Avila. Many of the plants which used to grow here are larrea (“jarilla” in Spanish), a desert shrub that flowers in yellow. Without their roots holding the soil together, the wind was able to blow large amounts of fine dust into the air.

This entry was posted on Monday, July 10th, 2017 at 9:22 am and is filed under Ground Photography, Ground to Space. You can follow any responses to this entry through the RSS 2.0 feed. Both comments and pings are currently closed.

One Response to “Ground Sighting: the Remote Patagonia Fire Scar”