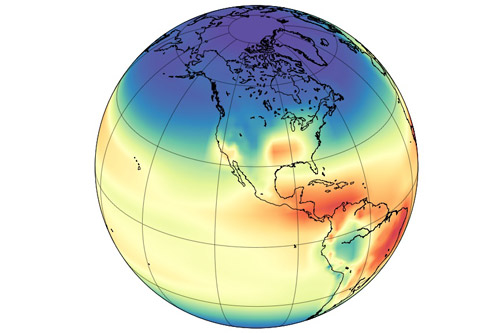 Model simulation of the hydroxyl radical concentration in the atmosphere. Image by Angharad Stell, University of Bristol.

A mystery about global methane trends just got more muddled. Two studies published in April 2017 suggest that recent increases in atmospheric concentrations of methane may not be caused by increasing emissions. Instead, the culprit may be the reduced availability of highly reactive “detergent” molecules called hydroxyl radicals (OH) that break methane down.

Understanding how globally-averaged methane concentrations have fluctuated in the past few decades—and particularly why they have increased significantly since 2007—has proven puzzling to researchers. As we reported last year:

“If you focus on just the past five decades—when modern scientific tools have been available to detect atmospheric methane—there have been fluctuations in methane levels that are harder to explain. Since 2007, methane has been on the rise, and no one is quite sure why. Some scientists think tropical wetlands have gotten a bit wetter and are releasing more gas. Others point to the natural gas fracking boom in North America and its sometimes leaky infrastructure. Others wonder if changes in agriculture may be playing a role.”

The new studies suggest that such theories may be off the mark. Both of them find that OH levels may have decreased by 7 to 8 percent since the early 2000s. That is enough to make methane concentrations increase by simply leaving the gas to linger in the atmosphere longer than before.

Atmospheric methane has continued to increase, though the rate of the increase has varied considerably over time and puzzled experts. (NASA Earth Observatory image by Joshua Stevens, using data from NOAA. Learn more about the image.)

As a press release from the Jet Propulsion Laboratory (JPL) noted: “Think of the atmosphere like a kitchen sink with the faucet running,” said Christian Frankenberg, an associate professor of environmental science and engineering at Caltech and a JPL researcher. “When the water level inside the sink rises, that can mean that you’ve opened up the faucet more. Or it can mean that the drain is blocking up. You have to look at both.”

Unfortunately, neither of the new studies is definitive. The authors of both papers caution that high degrees of uncertainty remain, and future work is required to reduce those uncertainties. “Basically these studies are opening a new can of worms, and there was no shortage of worms,” Stefan Schwietzke, a NOAA atmospheric scientist, told Science News.

You can find the full studies here and here. The University of Bristol has also published a press release.

This entry was posted on Friday, May 5th, 2017 at 3:54 pm and is filed under NASA News, Research News, Uncategorized. You can follow any responses to this entry through the RSS 2.0 feed. Both comments and pings are currently closed.