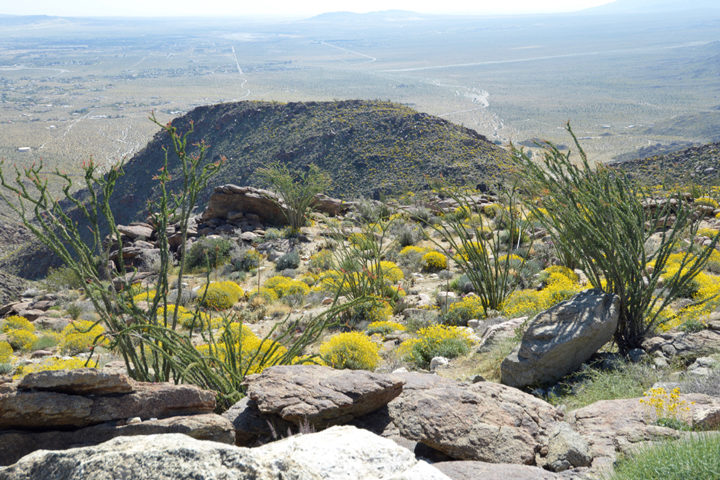 In late March 2017, California’s Colorado Desert sprang to life with vegetation following a period of ample precipitation. From space, imagery acquired on March 23 showed a widespread green up. From the ground, photographs from the same area showed the greenery topped with vibrant blooms.

Writer and avid amateur photographer Ray Boren was on location in Anza-Borrego Desert State Park to witness peak bloom, but not without a little trial and error in timing. He shared some photographs and a brief description of his journey.

“I first visited Anza-Borrego last year, in early May—a little late, I discovered, to catch the blossoms at their peak (though there were a few even then). It was already hitting 100 degrees there ….

So, when I heard that this year’s “super-bloom” in California’s largest state park was even better—enhanced by drought-busting winter and spring moisture—I had to dash the 800 or so miles from my Utah home to see what I could see. I did so with my sister Elaine, and we were well rewarded.

These photographs are from a drive through Anza-Borrego on a beautiful, even “cool” Monday, March 27, 2017.

The vista (top photo) is from Anza-Borrego’s granite mountains, which basically form a north-south spine through the huge state park. The view is from a turnoff on S22, a San Diego County road toward the park’s north side, and is looking east. From this point, you can look down upon the community of Borrego Springs, which is where Anza-Borrego’s visitor center is located (and which is quite recognizable in the satellite photos NASA Earth Observatory used as an Image of the Day).

The yellow flowers, which blanket the sunny slopes, are I believe California trixis. Gangly, multi-limbed ocotillo, with their flowering red tips, are common in the park, and they are having a grand spring.” 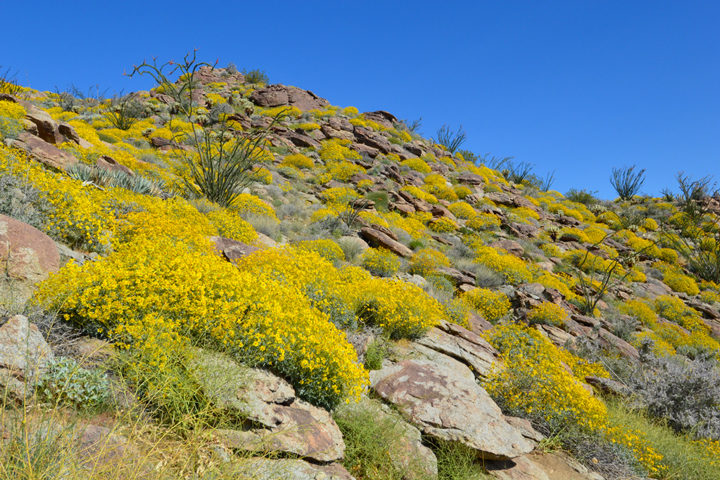 “Pictured in other photos, from the same S22 route, are beavertail cactuses, with their brilliant pink-lavender flowers just beginning to pop. The super-bloom seems most dominant on the north side of the park (we also drove south, to see the badlands). The garden at the visitor center is bursting with color, including such lovely plants as wolf’s cholla, barrel cactus and California’s squat but beautiful fan palms. We even saw a couple of Anza-Borrego’s iconic Peninsular desert sheep (“borrego”) on the ridges.

During our journey, we also saw desert flowers near the border with Nevada and Arizona, and were amazed by the bountiful show under way at the Antelope Valley California Poppy Reserve near Lancaster, which we visited on the way home.”

The Anza-Borrego Desert without wildflowers blooming. This image was acquired by the Operational Land Imager (OLI) on Landsat 8 on March 20, 2016. Learn more. 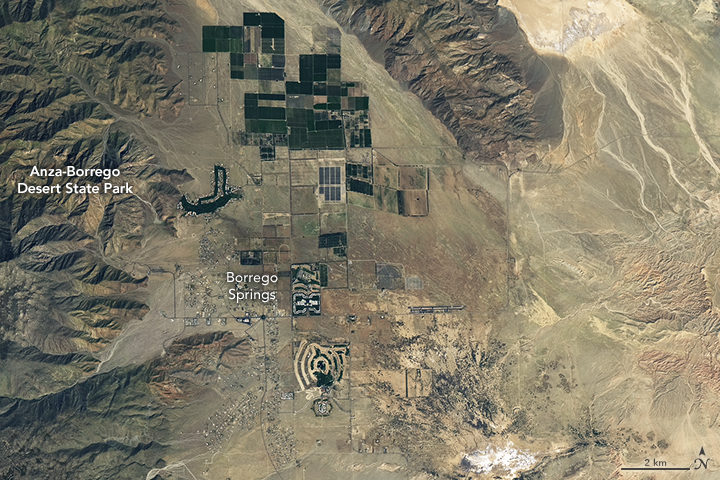 The Anza-Borrego Desert during a wildflower bloom. Notice the greens and purples around Borrego Springs.  This image was acquired by the Operational Land Imager (OLI) on Landsat 8 on March 23, 2017. Learn more.

This entry was posted on Monday, April 3rd, 2017 at 6:02 pm and is filed under Ground to Space. You can follow any responses to this entry through the RSS 2.0 feed. Both comments and pings are currently closed.

5 Responses to “Hunting “Peak Bloom” in a California Desert”