In celebration of Valentine’s Day, the NASA Earth Observatory staff took some time to look through our archives to find a few images that we absolutely love. You will find eight of our favorite scenes below: the islands of Mergui Archipelago, tea-colored water in James Bay, a snowy scene of Long Island, the intricate waterways of Musa Bay, an eddy of phytoplankton near South Africa, the Nardo racing ring in Italy, sea ice and icebergs in Antarctica, and a meandering river in the Amazon. Each staff member wrote a short note explaining why they chose the image.

Do you have a crush on NASA, earth science, and satellite imagery like we do? Get in on the fun by finding your favorite image from our archives and posting the link to the comment thread (and your social media sites of choice) with a few words explaining why you love the image. If you have trouble finding the perfect match by blindly searching our archives, you can also go to this page and sort by category, year, and month. You can also try our Visible Earth archive, where the images are conveniently categorized by what they show and which satellite sensor acquired them.

This image is full of fantastic reminders about our planet and the science of Earth observation. Sediment flows, forests, and human settlement can all be seen in gorgeous color. But what’s more — the image was acquired by Landsat 5 back in 2004. We are currently two generations further in the Landsat constellation; this image is a vivid reminder of the quality and depth of that legacy. — Joshua Stevens, data visualizer

If you’ve ever read the blog FYFD or even spent time looking carefully at cream swirling around in your coffee, you’ll know why I love this image. There are times that fluids just going about their mundane business of mixing and flowing make patterns that are insanely beautiful. Check out our original story for a more detailed view of the von Kármán vortices swirling away from the small island in the middle of the Bay to see what I mean.  — Adam Voiland, science writer

Home is where the heart lies. In my case, that’s New York City and Long Island — my two homes. I grew up in both of these places, and love them both. This image shows dense snow that covered New York in February 2015. If Landsat 8’s Operational Land Imager (OLI) could zoom in farther, you might see my mom and me cross-country skiing on the beach, or my dog bounding through the hills of snow.  I still remember the enormous ice floes in Long Island Sound, which you can see in this image. — Pola Lem, science writer

There’s a lot to this image I really like. The dendritic pattern of waterways and the sharp contrast that has against the strong straight linear features of man-made structures is quite striking. Also, the way that the warm, reddish-browns and the cool-toned blues and greens weave together is really compelling. Finally, I like the backstory of how we found this image: it was an accidental discovery made possible only because the satellite — Earth Observing-1 — produces a small number of images each day, making reading the entire list of images acquired (not just known objects of interest) possible for serendipitous discoveries like this. — Jesse Allen, data visualizer

After 6.5 years and 2500+ images since I joined EO, I have a hard time calling any image a favorite. But I thought of this one today because it pulls together many strands of my life. I have worked with scientists studying the Earth from space and with those studying the ocean from ships. I have long enjoyed learning and writing about the macrocosm and the microcosm — seeing things on both the grandest and the smallest of scales. And I have always preferred nonfiction, photography, and realism to abstract and impressionistic art. This phytoplankton bloom, which is tracing out the vortices of an eddy, looks like a blue rose in the sea. And while it looks like a painting, it is completely natural. It was created by the tiniest of organisms — phytoplankton — and by unseen, potent forces — deep ocean currents. It’s another day when reality is just as beautiful as any art. — Michael Carlowicz, managing editor 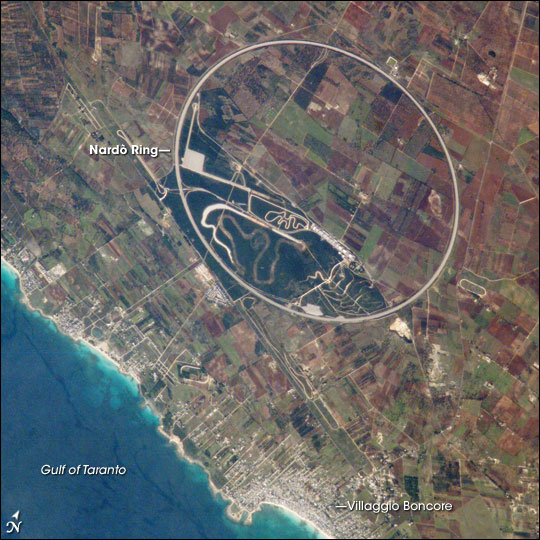 Being an automotive enthusiast, as well as an amateur racer, I’ve always loved images of the Nardo Ring.  This racing circuit is a perfect circle, and massive in order to be used for vehicle testing.  Highways, city girds, and other roadways are often prominent features in astronaut photography, but the scale and precision of the Nardo Ring are impressive when set against the Italian farm fields.  It’s easy to see, even from up there, the impact the racing and automotive culture has on Italy, and the rest of the world.  — Paul Przyborski, programmer/dba/designer

I really like this image because of the variety of blue and white hues. There is young ice, old ice, icebergs that are trapped in sea ice, and all of it is accentuated by an oblique sun angle casting shadows and highlighting texture. — Kevin Ward, team leader

If I’m not mountain biking, you will probably find me kayaking—a hobby partly inspired by regularly seeing incredible views of Earth’s rivers from space at work. What I love most about this image of Rio Mamoré in the Amazon Basin is how you can see how much the rivers meander and migrate over time. Interestingly, researchers studying rivers in this region found that the greater the amount of sediment from external sources (glacial, volcanic, or human activity), the more likely the rivers were to meander. — Kathryn Hansen, science writer

This entry was posted on Tuesday, February 14th, 2017 at 4:17 pm and is filed under Uncategorized. You can follow any responses to this entry through the RSS 2.0 feed. Both comments and pings are currently closed.

9 Responses to “Satellite Images We Love”