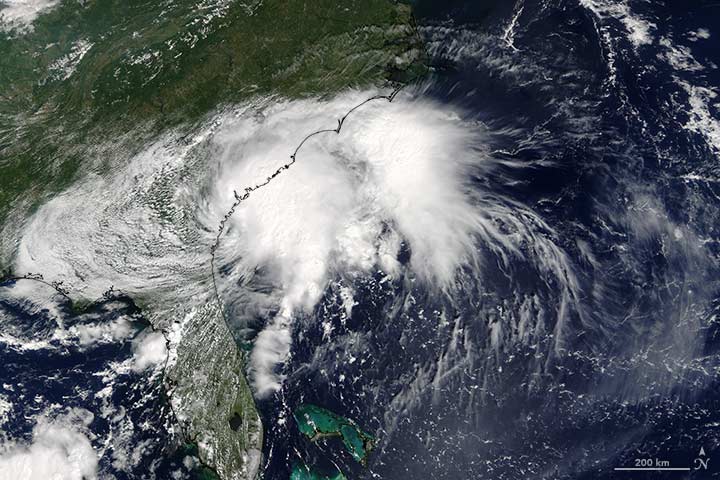 Tropical Storm Julia made headlines in September 2016, but not in the usual way. It wasn’t a particularly strong or destructive storm, although it brought heavy rainfall to coastal areas of the eastern United States from Florida to Virginia. The unusual aspect was where it formed: Julia became a tropical storm while over land, not over the ocean.

The image above, acquired at 11:55 a.m. Eastern Daylight Time (15:55 Universal Time) on September 14, 2016, with the Moderate Resolution Imaging Spectroradiometer (MODIS) on NASA’s Terra satellite, shows Julia over the southeastern United States. At the time, the storm was moving toward the east and had maximum sustained winds of about 55 kilometers (35 miles) per hour.

A NASA-funded study in 2013 by meteorologists Theresa Andersen and Marshall Shepherd described a new category of storm—one that draws energy from water on land. The research showed that some storms can derive energy from the evaporation of abundant soil moisture. Since publishing the research, Shepherd and colleagues have received frequent inquiries as to whether a particular storm was influenced by this “brown ocean” effect. In the case of Julia, the answer is not clear.

“I personally find it overly speculative to make that linkage right now,” Shepherd said. “Frankly, the Baton Rouge floods may have more of a link to the brown ocean than this event, which experienced quite a bit of moisture advection from the ocean.”

The uncertainty in Julia’s case comes from its position. Although the storm developed its center while over land, it was still too close to the ocean for scientists to distinguish an influence from land-based water. Read Shepherd’s full explanation here.

This entry was posted on Wednesday, September 28th, 2016 at 5:22 pm and is filed under Natural Hazards. You can follow any responses to this entry through the RSS 2.0 feed. Both comments and pings are currently closed.