What is most interesting about your role at Goddard?
I am a physicist and work in atmospheric science, with a specialty in remote sensing. I use data from satellites to look at Earth’s atmosphere, and I focus on natural and manmade aerosols, which are very small particulate matter.

I am part of the science team for the Ozone Monitoring Instrument (OMI) on the Aura satellite. Launched in 2004, OMI is an instrument designed to survey pollutants such as sulfur dioxide or aerosols in the atmosphere. I am part of the team that develops algorithms based on this data.

Where are you from?
I was born in Buenos Aires, a city as dense as New York. I got a master’s degree in physics from the University of Buenos Aires. Because I wanted to live abroad, I came to the U.S. to get a doctorate in geophysics, specializing in atmospheric sciences at the University of Washington. I came to NASA Goddard because I wanted to learn radiative transfer theory from the people who designed and created the satellites that I used for my Ph.D. thesis. Radiative transfer is the study of propagation of electromagnetic energy. It provides the framework and, most importantly, the equations that most satellite retrieval algorithms use.

What is your main scientific work?
My main objective is to use algorithms to determine how much radiation has been absorbed by atmospheric aerosols. The study of absorption by aerosols is important because it can change the temperature profile of the atmosphere. For example, a thick cloud of smoke can increase the ambient temperature by absorbing solar energy and returning that energy to the environment as heat.

What are some of your other scientific interests?
I also like to spend time looking at satellite images for phenomena that are overlooked. For example, I am very interested in dust from glaciers and other high-latitude deserts. Dust plumes coming off Greenland’s and Alaska’s coasts can be clearly seen in satellite images.

The Moderate Resolution Imaging Spectroradiometer (MODIS) on NASA’s Aqua satellite captured this image of dust from the Copper River Delta being blown over the Gulf of Alaska on October 28, 2014. Read more here.

I am curious about measuring particulate mass concentration based on these images. The implication is that, unlike the more tropical sources of dust like the Sahara Desert, the high-latitude sources are near and upwind of ocean ecosystems with known deficiencies in certain nutrients. It is widely believed that the dust plumes are supplying nutrients, such as iron and phosphorous, that would otherwise not be available in these marine ecosystems. However, we have not yet proven this idea.

I am also beginning to work with astrobiologists to implement or adapt astrobiology remote sensing techniques to study aerosols in the Earth’s atmosphere. This is a new, exciting area for me.

What is your biggest discovery?
About 10 years ago, while looking at dust plumes coming off the Patagonia desert of South America, I ran into a very cloudy area with highly distinctive tracks in the clouds. It turns out that I discovered the equivalent of tracks of smoke from ship engines—except these tracks were generated by volcanoes. The tracks were formed in clouds moving over very weak volcanic eruptions. Rather than a full eruption, these traces are made from volcanic belches. When these aerosols reach the cloud deck above the volcano, they change the properties of the clouds slightly. Just like pollution entering a cloud, the volcanic aerosols induce a change in droplet size that results in a change in amount of radiation reflected by the cloud. This is change is what is detected by the satellite.

I found all this just by chasing dust from Patagonia. I just wanted to know how far this dust would go. 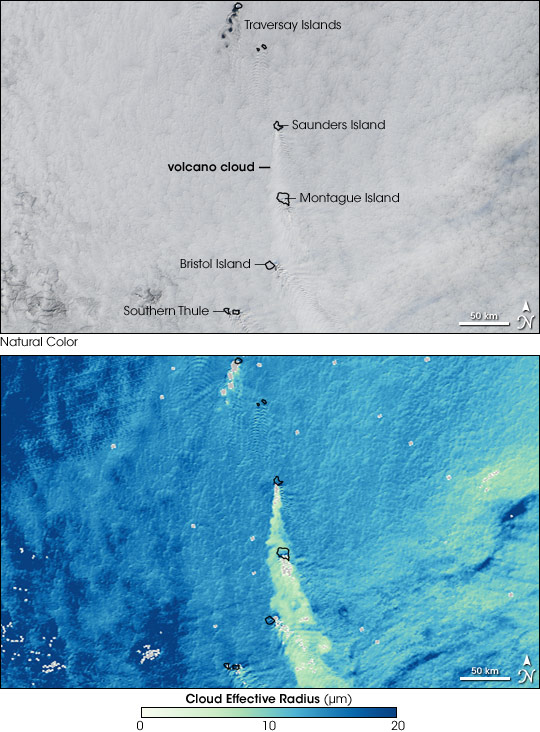 Clouds that form around volcanic emissions are made up of many small droplets instead of fewer larger droplets. Since these clouds present more surfaces for light to bounce off of, they are brighter than other marine clouds. Bright volcano clouds are similar to ship tracks, which from around sulfate aerosols in ship exhaust. The top image illustrates the impact of small-scale volcanic eruptions on clouds. The image was captured by the Moderate Resolution Imaging Spectroradiometer (MODIS) on NASA’s Aqua satellite on April 27, 2006. The lower image, calculated from the MODIS data, shows the average size of particles at the top of the clouds. Read more about the images here.

Please tell us about your field work in Patagonia.
I have been to Patagonia twice. Both times, I was working with a partner to install equipment that measures dust at the ground—the same dust that we see from space.

Patagonia is a desert in the southern end of Argentina. It is cold, dry, and sparsely populated. Patagonia lies next to a fantastic mountain range, the Andes, that is twice as tall as the Rockies.

The Moderate Resolution Imaging Spectroradiometer (MODIS) on NASA’s Aqua satellite captured this natural-color image of dust blowing out of the Patagonian Desert.

This work put me in touch with a diverse group of scientists–including geochemists, paleoclimatologists, and geomorphologists–who are all interested in the presence and impact of dust at high latitudes. We formed a network called the High Latitude Dust and Climate Network, and we are hosting a symposiumin Iceland two years from now.

It is interesting to see how different scientists view time. The satellite data I use is based on many photos per minute. My time reference is very fast. In contrast, some of the paleoclimatologists, who drill cores into the ice, view tens of thousands of years in a single inch. They think in terms of thousands of years.

How did your training make you able to find things no one else sees?
This skill comes from my Ph.D. thesis on measuring how atmospheric particles capture water and grow to become cloud drops. I was one of my adviser’s first Ph.D. students, and he did not have much money to buy new equipment. So we had to use observations or data already analyzed by other groups. As a result, I was always getting leftover data that had already been mined. The easy things that one could say about them had already been discovered and reported. So I had to sharpen my skills to discover phenomena and effects that had been overlooked by others.

What motivates your scientific research?
I am always curious about understanding physical concepts and how different phenomena integrate. For example, I want to understand how dust interacts with ocean biology. Another example is how the ocean interacts with the atmosphere by supplying aerosols.

What else do you do to satisfy your curiosity?
I make it a point to attend seminars outside my field. Presently, I am very interested in planetary exploration, so I go to many lectures. It is super fun, and I learn things that I can apply to my own research. I also read papers from outside my field so that I can learn about other areas.

Why did you choose your profession?
I wanted to be a biologist. I became a physicist because it was easier for me to understand equations than to memorize facts. Mathematics makes sense to me.

Who is the most inspiring person you have worked with at Goddard?
One of my thesis advisers was the Yoram Kauffman. He was a very intelligent and generous scientist–brilliant actually. He was very good at inspiring and encouraging others to explore their instincts, to ask why and then find out the answer. Yoram is the one who inspired me to follow up on the volcano discovery. When I first showed him the faint traces, he was so excited that he said that he could see the image on the front page of Science magazine. Coming from him, that meant everything to me. Unfortunately, he died about two months later.

What do you do in your spare time?
On weekends, I spend most of my time with my wife and two kids. Every spare minute during the week, I get onto my laptop and look at new satellite images, much to my wife’s chagrin.

This piece was adapted from an article originally published by Goddard Space Flight Center.

This entry was posted on Thursday, April 21st, 2016 at 9:52 am and is filed under Q&A. You can follow any responses to this entry through the RSS 2.0 feed. Both comments and pings are currently closed.

One Response to “Santiago Gassó: Following the Patagonian Dust Trail”