Icebergs are white, right? Well, no, not completely. As seen in this shot (above) of a recently-flipped iceberg, their undersides can come in spectacular shades of blue and green. The photograph was captured in Cierva Cove, Antarctica, by videographer Alex Cornell during a family vacation. “[It] had this arresting alien-green color to it,” Cornell said of the iceberg in an interview with Universe Today. “It looked a lot more like a parked spacecraft than a floating iceberg.”

When icebergs look white, it is because compressed snow at their surfaces contain large numbers of tiny air bubbles and other reflective particles that tend to reflect all wavelengths of visible light equally. When ice gets compressed—such as when it is trapped under water—the air bubbles and other reflective particles get squeezed out and washed away, leaving purer ice behind. When light encounters pure ice, it can penetrate deep into it rather than reflecting off the surface. As light moves through ice, longer wavelengths (red and yellow) tend to be absorbed most readily, leaving shorter-wavelength green and blue light to reflect back. This “leftover” blue and green light is what gives the undersides of icebergs their remarkable color.

As impressive as it is to see a close-up view, spotting blue ice is not that uncommon. In 2012, we published an aerial photograph with a striking patch of blue ice. Blue ice also shows up regularly in satellite imagery, such as this image acquired by the Advanced Land Imager on EO-1 in 2011.

To learn more about the color of icebergs, check out these stories from WebExhibits, the National Snow & Ice Data Center, and Seed. PetaPixel has also published an interesting guest blog post in which Cornell explains how he produced and distributed the photographs from start to finish. You can find more shots of the flipped berg on his website and Instagram page.

Cornell’s images were not the only jaw-dropping iceberg photographs I noticed this week. On Tuesday, Antarctic Sun editor Peter Rejcek pointed out that the U.S. Antarctic Program had added several new iceberg photographs to their photo library. The images below show an overturned iceberg (with some penguins on top) that contains centuries of windblown sediments and minerals. It really is the stuff of dreams. 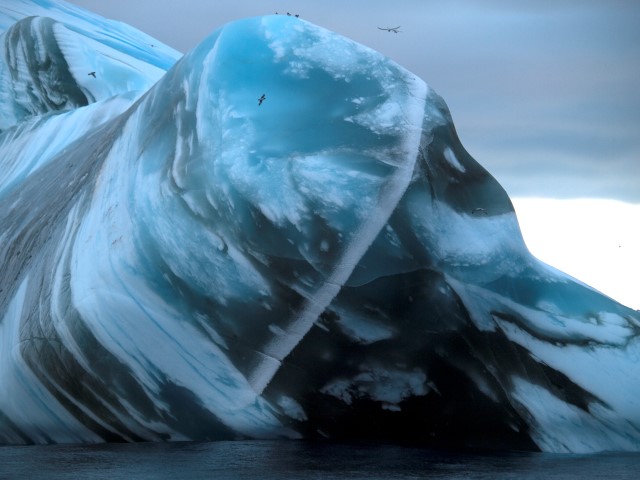 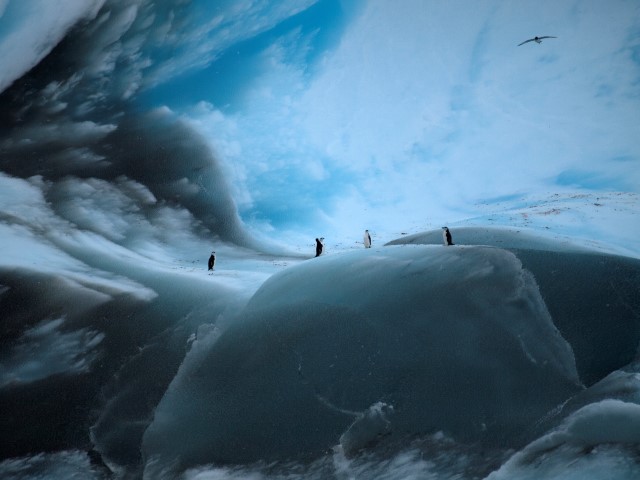 This entry was posted on Friday, February 6th, 2015 at 5:57 pm and is filed under Ground Photography. You can follow any responses to this entry through the RSS 2.0 feed. Both comments and pings are currently closed.