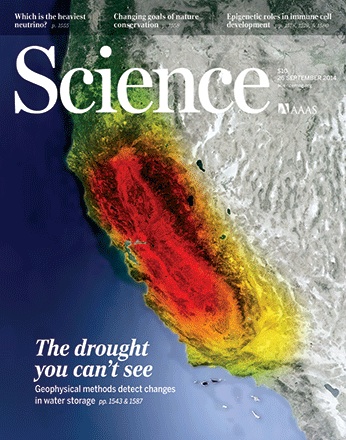 Drought-induced depletion of groundwater is no longer an issue that’s out of sight, out of mind.

Research by scientists from Scripps Institution of Oceanography, published this week in Science, describes a GPS technique used to measure drought-induced uplift of land in the western United States. The uplift measurements were used, in turn, to calculate the deficit in surface and near-surface water for the area, which they estimated for March 2014 to be 240 billion tons. That’s equivalent to a 4-inch-thick layer (10 centimeters) of water over the region, or the current annual mass loss from the Greenland Ice Sheet.

GPS is not the only way to measure land displacement caused by the loss of ground and surface water. Scientists have long used the Gravity Recovery and Climate Experiment (GRACE) satellites to estimate groundwater depletion around the planet, as noted by Marcia McNutt in a related editorial.

GRACE’s achievements even graced the cover of the same issue of Science (pictured above). The image shows California’s loss of fresh water (red) from 2002 through 2014. Drought has drained the region of more than 3.6 cubic miles (15 cubic kilometers) of fresh water in each of the past three years.

The image was updated from a version that initially appeared alongside research in 2013 by James Famiglietti of NASA’s Jet Propulsion Laboratory and University of California, Irvine, and Matthew Rodell of NASA’s Goddard Space Flight Center.

This entry was posted on Friday, September 26th, 2014 at 3:30 pm and is filed under NASA News, Uncategorized. You can follow any responses to this entry through the RSS 2.0 feed. Both comments and pings are currently closed.

8 Responses to “Goodbye Groundwater: GPS and Satellites Reveal an Oft-Unseen Aspect of Drought”