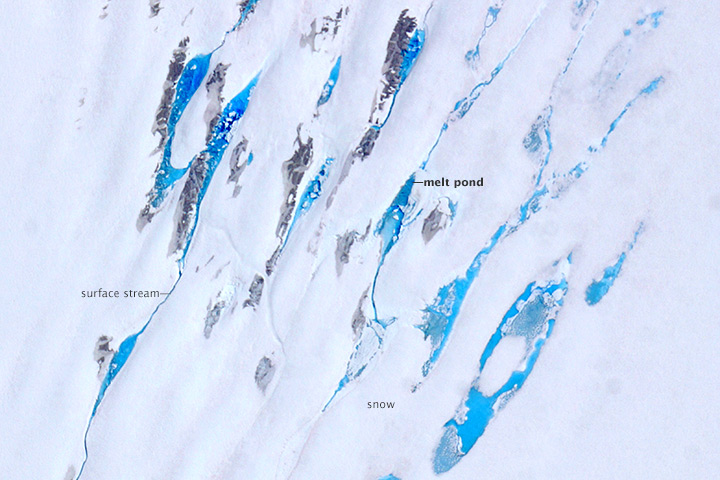 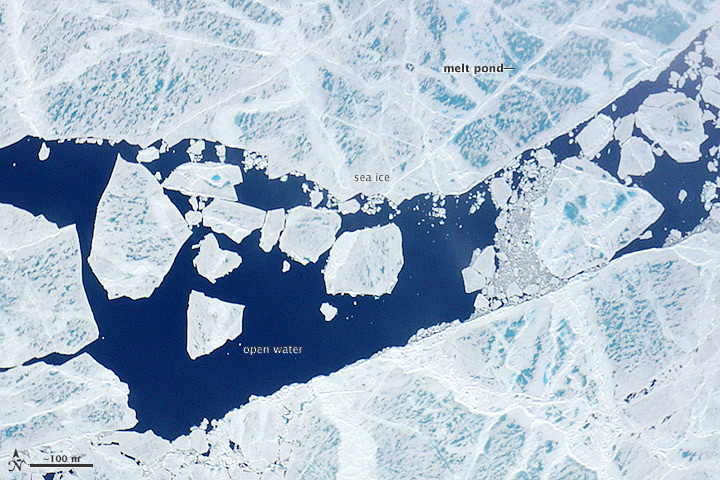 We published a photograph of a lone turquoise melt pond as our Image of the Day on August 2, 2014. Although that was one of the largest that scientists participating in the 2014 MABEL campaign saw, it certainly wasn’t the only one. In fact, that melt pond had plenty of company—and we had no shortage of photos of them.

The digital camera that captured the lone melt pond was taking a picture every 3 seconds, with each frame showing an area about 2.5 by 1.5 kilometers (1.6 by 0.9 miles). There were thousands of photographs to choose from, and many of them were spectacular. Above are two favorites. The upper image shows several narrow melt ponds and surface streams on a glacier in southeastern Alaska; the lower photo shows even more melt ponds on thinning sea ice.

Though melt ponds make for nice aerial photographs, they’re also a topic of great interest to scientists. In 2012, American researchers published an interesting study that detailed how melt ponds produce fractal patterns that can be useful for understanding the dynamics of sea ice melting. (For a more readable write-up, try this Scientific American blog post.) In 2014, scientists from the United Kingdom argued that the amount of water in spring melt ponds could be used to make skillful predictions about how much ice will melt during the height of summer.

This entry was posted on Friday, August 1st, 2014 at 6:04 pm and is filed under Uncategorized. You can follow any responses to this entry through the RSS 2.0 feed. Both comments and pings are currently closed.

One Response to “More Melt Ponds”