It’s funny what you can find in a satellite image. Mike Gartley, a research scientist at Rochester Institute of Technology, spotted the Landsat 5 satellite lurking in a Landsat 8 image of northwestern Brazil.

Landsat 5 once flew in the orbit that Landsat 8 now lives in. But in January 2013, the U.S. Geological Survey lowered L5’s orbit about 23 kilometers (14 miles)  as part of the decommissioning process. The satellite is now in a disposal orbit, slowly being dragged back to Earth.

Landsat 8, meanwhile, reached its final orbiting altitude of 705 kilometers (438 miles) on April 12, 2013. On November 22, Landsat 8 flew over the defunct Landsat 5 satellite, capturing this view of its predecessor. Landsat 5 is just a few pixels across and is only visible at all  because it is much closer to Landsat 8 than it is to Earth. See additional images from the November 22 overflight on NASA’s Landsat web site.

Finding Landsat 5 in the image was a matter of course for Gartley, who routinely hunts for space objects in Landsat images. As of December 2011, more than 22,000 “resident space objects” were in orbit around the Earth. The Space Surveillance Network tracks all of these objects with telescopes, radars, and a computer model. Gartley uses this information to figure out when an object will fly into Landsat 8’s view.

“Believe it or not, there are anywhere from 1 to 4 such underflights of space objects that are passing through the field of view of Landsat 8 on any given day,” says Gartley. “Many of the objects are old rocket bodies and COSMOS satellites (Tselina-D ELINT type), while the ISS has also popped up at least three times since last May.” 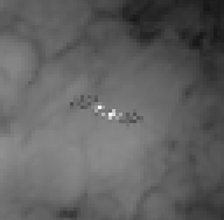 Landsat 5’s appearance is appropriate: it’s the satellite that just won’t go away. The tenacious satellite was built to operate for 3 years, but worked for more than 29, setting a world record for the longest operating Earth observation satellite. Even the decommissioning process took longer than expected because the satellite kept running. Hear the story from longtime flight systems manager for Landsat 5, Steve Covington, in this recorded talk originally given at the Library of Congress:

This entry was posted on Tuesday, February 18th, 2014 at 5:32 pm and is filed under Uncategorized. You can follow any responses to this entry through the RSS 2.0 feed. Both comments and pings are currently closed.

2 Responses to “The Landsat 5 Photobomb”