Best of the Archives: Mud Trails from Fishing Trawlers 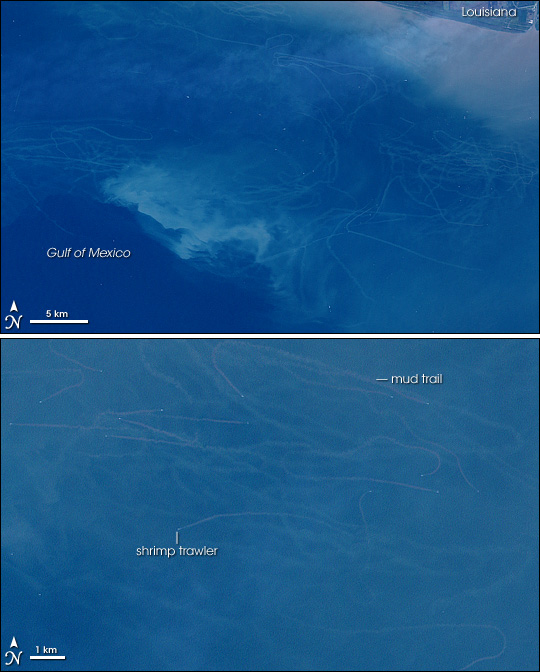 Fourteen years ago, the Enhanced Thematic Mapper Plus on Landsat 7 acquired these images of mud trails off the coast of Louisiana. They were caused by bottom trawling in the Gulf of Mexico, a fishing technique that involves dragging large nets across the sea floor.

Bottom trawling is an efficient way to scoop up shrimp and squid, but that’s not all that ends up in the nets. As our earlier caption explained: “In addition to harvesting intended species, many trawls indiscriminately capture non-target species, like sea turtles, which are discarded. Trawling crushes or destroys the seafloor habitat that feeds and shelters marine life; the nets literally scrape the mud off the ocean bottom. As the mud resettles, it can smother surviving bottom-dwelling creatures.”

Some things have changed and some things have stayed the same since this image was acquired in 1999. In 2006, the National Oceanic and Atmospheric Administration prohibited bottom trawling off of most of the Pacific Coast of the United States. Other countries—including Norway, Canada, Australia, and New Zealand—have also taken steps to discourage the practice. Yet in many parts of the world, including the U.S. Gulf Coast, the practice persists. You can read more about bottom trawling in the Gulf of Mexico from Sky Truth, the Gulf of Mexico Fishery Management Council, and Science Daily.

Bottom trawling isn’t the only type of fishing visible from space. Read our new feature about the city of light that appears off the coast of southern Argentina.

This entry was posted on Thursday, October 24th, 2013 at 9:29 am and is filed under From the Archives. You can follow any responses to this entry through the RSS 2.0 feed. Both comments and pings are currently closed.

One Response to “Best of the Archives: Mud Trails from Fishing Trawlers”