Yesterday’s Image of the Day — Ocean Revealed — elicited an interesting response from Norman Kuring, a NASA oceanographer who frequently contributes to the Earth Observatory. He notes:

“There have indeed been a number of studies that exploit sunglint for ocean research since Paul Scully-Power made his statement. However, I disagree with the follow-on sentence that, “his observation holds true for satellite observations today.” While sunglint does reveal some information about the ocean beneath, for visible radiometry sensors it usually obscures more than it reveals.”

Good point, Norman. Sunglint hides the telltale shades of blue and green that point to phytoplankton growth in the ocean’s surface waters. Here’s a good example, originally published on the Earth Observatory in 2007. 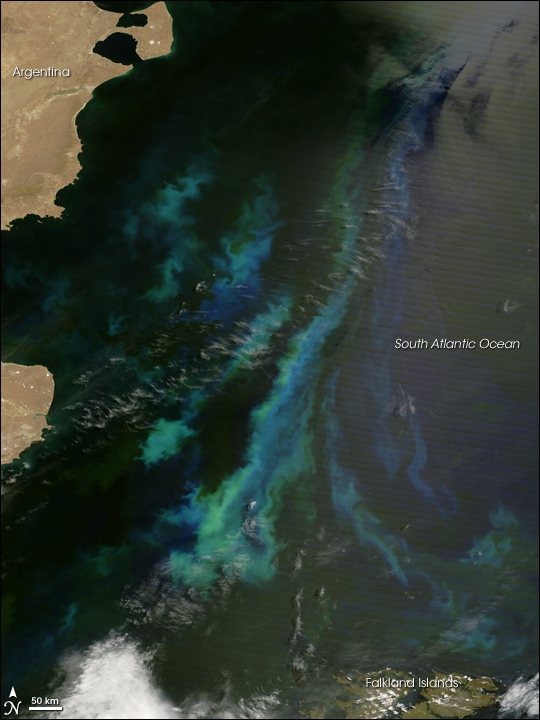 Notice how the bright sunglint obscures the color on the top and right side of the image. (NASA’s Ocean Color web site provides another good example with a more detailed description.) It’s no wonder that oceanographers like Norman cringe at the thought of sunglint in ocean images.

This entry was posted on Friday, August 9th, 2013 at 11:43 am and is filed under Uncategorized. You can follow any responses to this entry through the RSS 2.0 feed. Both comments and pings are currently closed.

One Response to “Ocean Revealed or Hidden?”