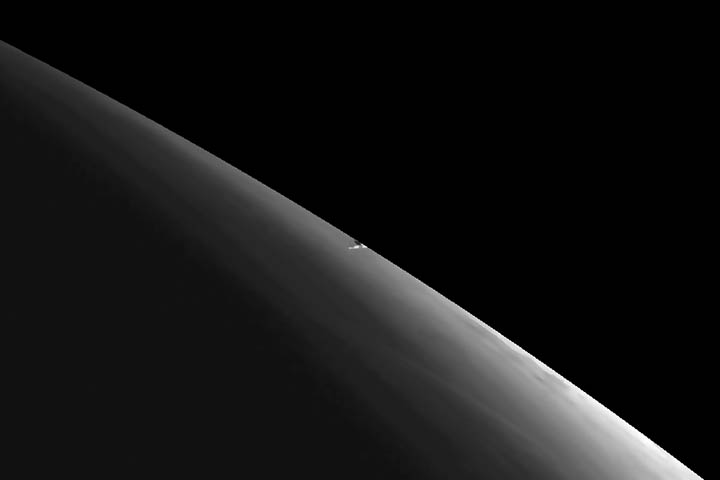 Around 9:20 a.m. local time on February 15, 2013, a blazing mass of rock from space—a meteor—streaked across the sky over the Ural Mountains in the Chelyabinsk region of Russia. The burning mass produced a loud sonic boom and shock wave that blew out windows in multiple cities and towns. Russian media outlets are reporting hundreds of injuries, most minor, and damage to thousands of buildings.

Bill Cooke, the head of the Meteoroid Environments Office at Marshall Flight Center, said that the object, which likely came from the asteroid belt, had a diameter of about 15 meters (50 feet) and weighed about 7,000 metric tons. When it encountered the top of Earth’s atmosphere, it was moving 18 kilometers (11 miles) per second and left a vapor trail that was approximately 480 kilometers (300 miles) long. It lasted in the atmosphere for over 30 seconds before breaking up 25 kilometers (15 miles) above the surface, producing a violent explosion that released about 300 kilotons of energy. Most of the fragments burned up as they passed through the atmosphere, but some meteorites did reach the surface. One reportedly left an impact crater that was 6 meters (20 feet) in diameter.

The SEVIRI instrument on the European Space Agency’s Meteosat-10 geostationary weather satellite captured a view (top of this page) of the vapor trail.  Dramatic videos and photos of the incident have also popped up on the internet.

If you would like to learn more about 2012 DA14, tune into NASA Television starting at 2 p.m. EST. For general background about near-Earth objects, see these FAQ’s from NASA’s Near Earth Object Program.

This entry was posted on Friday, February 15th, 2013 at 10:36 am and is filed under News Roundup. You can follow any responses to this entry through the RSS 2.0 feed. Both comments and pings are currently closed.

11 Responses to “Meteor Fragments Blaze Over the Ural Mountains”