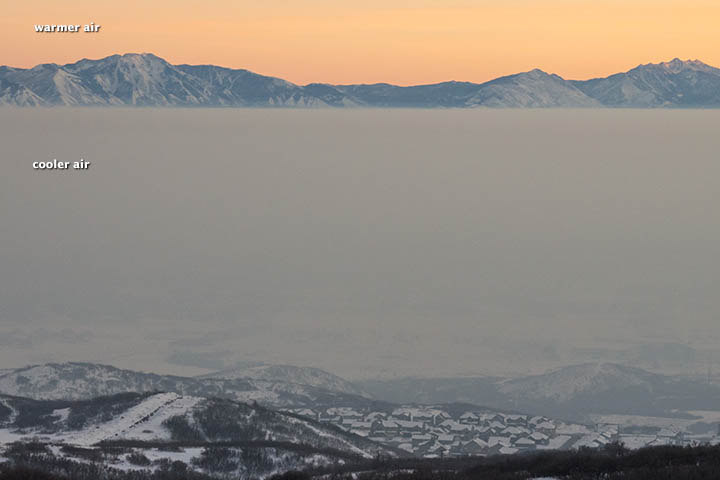 Levels of particulate pollution rose above 130 micrograms per cubic meter in Salt Lake City on January 23, 2013.  That’s three times the federal clean-air limit, according to the U.S. Environmental Protection Agency.  Or, as the Associated Press put it, roughly equivalent to Los Angeles air on a bad day.

“The Salt Lake Valley has some of the worst wintertime pollution episodes in the West due to the combination of its increasing population and urbanization, as well as its geometry, with the valley sandwiched between mountain ranges to the west and east,”  University of Utah atmospheric scientist John Horel explained in a recent story published by the National Center for Atmospheric Research (NCAR).

Normally temperatures decline with altitude, but meteorological conditions across the Great Basin set up a situation in which the opposite occurred for a prolonged period. For much of January, temperatures increased with altitude, creating what’s known as a temperature inversion. During the peak of the inversion, temperatures were -15.5ºC (4.1ºF) at the surface and 7.6ºC (45.7ºF) at 2,130 meters (6,988 feet), University of Utah meteorologist Jim Steenburgh reported on his blog.

The result? The layer of warm air on top functioned like a lid, trapping pollutants in the valleys and preventing winds from dispersing the haze. The photograph above, taken by Roland Li on January 19, shows the sharp boundary an inversion can create.

Air quality problems caused by temperature inversions are not unique to Salt Lake City.  Cities in California (including Bakersfield, Fresno, Hanford, Los Angeles, Modesto) and Pittsburgh, Pennsylvania, have some of the most severe short-term particle pollution problems in the nation, according to a list published by the American Lung Association.

Such events are a reminder that the United States is not immune from dangerous spikes in particulate pollution, though particulate levels don’t get as high as they do in some other parts of the world. (See this map of fine particulates for a global perspective.) Eastern China, for example, recently suffered through an extreme pollution event that was far more potent than the Salt Lake City event.

This entry was posted on Tuesday, January 29th, 2013 at 3:25 pm and is filed under Earth Indicator. You can follow any responses to this entry through the RSS 2.0 feed. Both comments and pings are currently closed.