A view of Sandy from the TRMM satellite 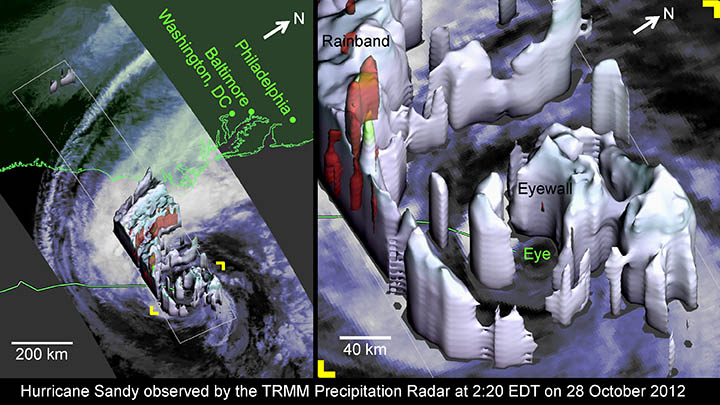 The day before Hurricane Sandy’s center was forecast to make landfall in New Jersey, the radar on the Tropical Rainfall Measuring Mission (TRMM) satellite observed the hurricane’s center.

At 2:20 EDT on Sunday October 28, Hurricane Sandy was a marginal category 1 hurricane and its eyewall was modest, as TRMM reveals, which gives us hints about its possible future strength.

The eyewall was somewhat compact with its 40 km diameter; the eyewall contained only relatively light precipitation; and none of Sandy’s eyewall storm cells managed to burst through, or even reach, the tropopause, which has about a 10 km height at mid-latitudes. Evidence of the weak updrafts in the eyewall comes from the fact that the TRMM radar’s reflectivity stayed under 40 dBZ, a commonly cited signal strength at which updrafts can be vigorous enough to form hail and to lift smaller ice particles up through the tropopause and into the stratosphere.

But placed in context, the TRMM-observed properties of Hurricane Sandy’s eyewall are evidence of remarkable vigor. Most hurricanes
only have well-formed and compact eyewalls at category 3 strength or higher.  Sandy was not only barely a category 1 hurricane, but
Sandy was also experiencing strong wind shear, Sandy was going over ocean typically too cold to form hurricanes, and Sandy had been limping along as a marginal hurricane for several days.

With infrared satellite observations (as in the background of the images show), one can speculate about what the sort of convective storms are developing under the hurricane’s cloud tops, but Sandy was sneaking up the East Coast too far out at sea for land-based radars to provide definitive observations of the rain regions inside of the hurricane’s clouds. The radar on the TRMM satellite provided this missing information during this overflight of Hurricane Sandy.

The TRMM satellite also showed that the super-sized rainband that extended to the west and north of the center did contain vigorous
storm cells, as indicated by the red regions of radar reflectivity in excess of 40 dBZ. This rainband is expected to lash the coast well before the hurricane’s center make landfall.  Even further west, at the upper left corner of the image, one can see two small storm cells.  These storm cells are the southern-most tip of the independent weather system that is coming across the United States and that is expected to merge and possibly reinvigorate the remnants of Hurricane Sandy after Sandy makes landfall.

TRMM is a joint mission between NASA and JAXA, the Japan Space Exploration Agency.  Some of the questions about hurricanes left unanswered by the TRMM satellite will be explored by the Global Precipitation Measuring (GPM) satellite scheduled for launch in 2014.  For more information, visit http://pmm.gsfc.nasa.gov.

This entry was posted on Monday, October 29th, 2012 at 2:32 pm and is filed under Uncategorized. You can follow any responses to this entry through the RSS 2.0 feed. Both comments and pings are currently closed.

One Response to “A view of Sandy from the TRMM satellite”