This week’s Earth Indicator is 4 million…as in 4 million square kilometers. It’s a number that scientists studying sea ice never thought they would see.

Every year, the sea ice at the top of our planet shrinks and grows with the seasons. But because ocean water lags behind the atmosphere in warming up and cooling down, Arctic sea ice reaches its maximum extent in March, and its minimum in September.

Since 1979, satellites have observed Arctic sea ice shrinking and growing, and scientists at the National Snow and Ice Data Center (NSIDC) have recorded the minimum and maximum extents, adding them to a growing archive of data about Earth’s frozen places. In tracking sea ice, NSIDC uses a five-day average to smooth out bumps in the daily sea ice extents. The numbers have been refined over time with the adoption of new processing and quality control measures, but the ballpark numbers have remained the same.

In the summer of 2012, not only was the 2007 record broken, but within days, the passed another barrier. As of August 28, 2012, the five-day running average of Arctic sea ice fell below 4 million square kilometers (1.54 million square miles). NSIDC director Mark Serreze remarked: “It’s like breaking the four-minute mile. Nobody thought we could do that, but here we are.” 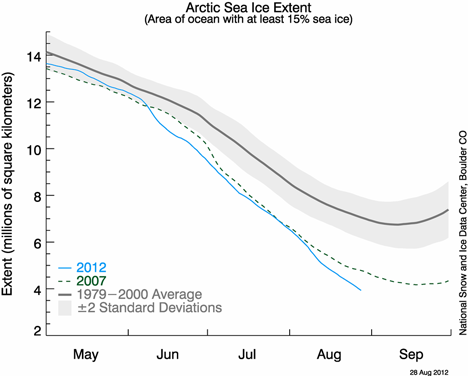 But whereas the four-minute mile was a milestone of human achievement, 4 million square kilometers of sea ice is not so inspiring. “Arctic sea ice extent is declining faster than it used to, and we can expect a continuing decline overall, with some inter-annual variability,” said NSIDC lead scientist Ted Scambos. “We have a less polar pole.”

The low sea ice extent for 2012 fits within a larger pattern. For the past several years, September Arctic sea ice extent numbers have remained well below the 1979–2000 average of 6.70 million square kilometers. The low extent from 2012 is no outlier.

This entry was posted on Thursday, August 30th, 2012 at 3:18 pm and is filed under Earth Indicator. You can follow any responses to this entry through the RSS 2.0 feed. Both comments and pings are currently closed.