Tornadoes plague the central and eastern sections of the contiguous United States far more than the western portion. That much is obvious from this map showing 56 years of tornado tracks, from 1950 through 2006. 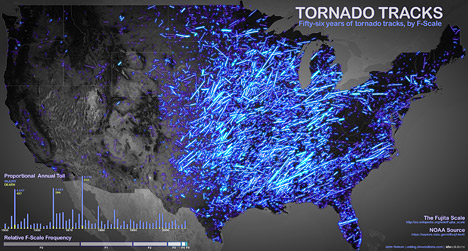 This map breaks down tornadoes by strength based on the Fujita scale. Stronger tornadoes appear as brighter lines. (An enhanced Fujita scale was implemented in 2007, but these tornado tracks were classified according to the earlier version.)

One prerequisite for tornado formation is humidity, which is much greater in the east than in the west. But topography also plays a role; few tornadoes form over mountainous West Virginia, for instance.

This map was created by John Nelson of IDV Solutions. He obtained the data through Data.gov, which was set up to “increase public access to high value, machine readable datasets” generated by the U.S. government. A high-resolution version of this image is available here.

This entry was posted on Thursday, June 14th, 2012 at 7:47 am and is filed under Uncategorized. You can follow any responses to this entry through the RSS 2.0 feed. Both comments and pings are currently closed.