By the year 1631, residents of southern Italy had perhaps grown complacent about the volcano that destroyed Pompeii. But near the end of that year, Mount Vesuvius reminded them of its power. From December 1631 to January 1632, explosive activity at Vesuvius caused a caldera collapse, a tsunami, mud flows, scorched farms, and up to 4,000 deaths. It was the volcano’s most destructive eruption since 79 AD.

The volcano was still rumbling several years later when it received a distinguished visitor: Athanasius Kircher, a German Jesuit mathematician and linguist living in Rome. Unlike his sensible contemporaries, he didn’t admire the volcano from a respectable distance. He descended into the active crater.

I reached Portici, the town at the roots of the mountain, and from there was led by a trusty peasant who knew the way, paying him a handsome fee. In the middle of the night I climbed the mountain by hard and rugged paths. When I reached the crater, horrible to relate, I saw it all lit up by fire, with an intolerable exhalation of sulfur and burning bitumen. Thunderstruck by the unheard-of spectacle, I believed I was peering into the realm of the dead, and seeing the horrid phantasms of demons, no less, perceived the groaning and shaking of the dreadful mountain, the inexplicable stench, the dark smoke mixed with globes of fire which the bottom and sides of the mountain continuously vomited forth from eleven different places, forcing me at times to vomit out myself . . . When dawn broke, I decided to explore diligently the whole of the interior constitution of the mountain. I chose a safe place where a firm foothold might be had, and descended to a vast rock with a flat surface to which the mountain slope gave access. There I set up my Pantometer and measured the dimensions of the mountain.

It was a bigger risk than most people would take, but by the time Kircher descended into the rumbling crater of Vesuvius, he had survived a shipwreck, gangrene, trampling by horses, a trip through the grinding wheel of a mill, and a near execution by Protestant soldiers in the Thirty Years War. So maybe a mere volcano didn’t intimidate him. 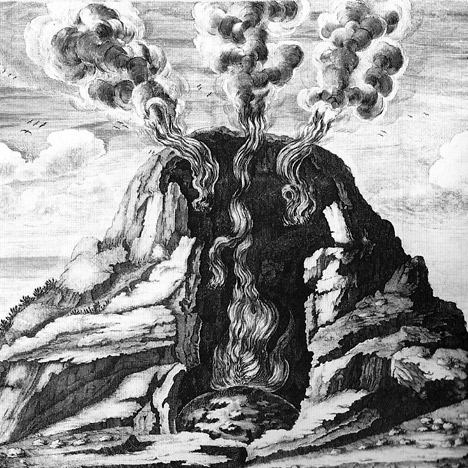 He visited and studied Vesuvius, Etna, and Stromboli, and between 1664 and 1678 he published his observations in Mundus Subterraneus (The Subterranean World). In his twelve volumes, Kircher suggested that volcanoes owed their heat to the combustion of sulfur, bitumen, and niter (a chemical composition similar to gunpowder). His assumption was understandable considering volcanic eruptions release gases, including the sulfur that nauseated him at Vesuvius. He also realized that the amount of molten material released by a volcano often exceeded what the volcano itself could contain. He surmised that volcanoes were vents for material deep within the planet’s interior. Furthermore, he realized that volcanic activity could destroy some mountains while building others.

Kircher produced a diagram of the Earth’s interior to illustrate his hypothesis. Although quite different from geologists’ current understanding of our planet’s core, his hypothesis of a central source of heat inside the planet, and his realization that volcanoes and earthquakes are a global phenomenon, are now widely accepted.

Kircher’s Mundus Subterraneus also discussed fossils. In Kircher’s day, naturalists had not yet figured out how fossils formed, and explanations varied from a creative force in the planet to the handiwork of angels. Kircher didn’t have a modern paleontologist’s understanding, but he did interpret some fossils correctly. And while some of his contemporaries attributed big skulls and femurs to giants, he wondered where the giants could find enough room to live and meat to eat. (The bones are now recognized as the remains of mammoths and mastodons.)

Kircher was a polymath who published on many topics besides Earth science, and his Mundus Subterraneus was a curious mixture of good science and weird old lore, including topics such as mining, gravity, magnetism, the Sun, the Moon, weather, bioluminescence, fireworks, herbal remedies, poisons, antidotes, astrology, demons, dragons, and subterranean men. Chased out of his native Germany by the violence of the Thirty Years War, he settled briefly in France before being summoned to Rome to teach mathematics and interpret Egyptian hieroglyphs. In fact, Kircher was summoned to Rome in the wake of the condemnation of Galileo Galilei. Church authorities wanted a showman who could rival’s Galileo’s talent and wit.

Kircher wasn’t ahead of his time in every respect. A believer in spontaneous generation of life forms, Kircher published recipes. Perhaps more remarkably, he believed in dragons, at least when they were vouched for by an authority (particularly a pope). In fact, in the words of one science historian, “Kircher was perhaps the last naturalist to believe passionately in the reality of any papal dragon he saw.” Dragons were featured in Mundus Subterraneus alongside astute observations about volcanoes and fossils. 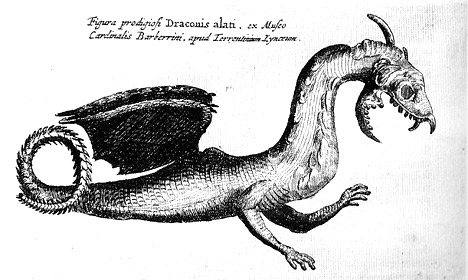 How could the same person who made correct observations about Earth sciences still believe in dragons? For starters, it was politically shrewd to believe in the things your patrons believed in, including the occasional mythological creature. And it’s important to remember the age in which Kircher lived. Even in the seventeenth century, belief in supernatural beings was fairly common, and the religious and political uncertainty of the times fueled outlandish rumors of monsters, bad omens, and witches. When the mother of the great astronomer Johannes Kepler was put on trial for witchcraft, Kepler rushed to her defense and assured the authorities she wasn’t a witch. But he didn’t argue that there was no such thing as a witch.

History hasn’t remembered Kircher as generously as Galileo or Kepler, but the Jesuit is worth remembering. Kircher was born on May 2, the feast day of St. Athanasius. While he remembered the date of his birth, he wasn’t so sure about the year: 1601 or 1602. So May 2, 2012, marks Kircher’s 410th or 411th birthday.

Rudwick, M.J.S. (1976) The Meaning of Fossils: Episodes in the History of Paleontology. Chicago: University of Chicago Press

Yamada, T. (2006)  Kircher and Steno on the “geocosm,” with a reassessment of the role of Gassendi’s works. Geological Society of America Special Papers.

This entry was posted on Monday, April 30th, 2012 at 5:17 pm and is filed under Uncategorized. You can follow any responses to this entry through the RSS 2.0 feed. Both comments and pings are currently closed.