For icebergs, breaking up can be easy to do

Much of the ice that blankets Antarctica is tied up in glaciers that slide slowly toward the sea. Fed by these glaciers, ice shelves form along the Antarctic coast, floating as thick, frozen plates on the sea surface. Every so often, these ice shelves calve large icebergs.

In March 2000, a colossal iceberg calved off the Ross ice shelf, Antarctica’s largest.  The iceberg — named B-15 — was 183 miles long and 23 miles wide, or nearly the size of Connecticut. Over the past decade, B-15 has broken into many pieces, and one of them, B-15J, eventually drifted north. By early December 2011, B-15J was floating in the Pacific Ocean roughly 2,400 kilometers (1,500 miles) east-southeast of New Zealand. Having migrated to warmer waters, B-15J began to break apart.

The breakup and melting are exactly what you’d expect under these conditions, but the details of the process still interest glaciologists because the melt and breakup of icebergs may shed light on what will happen to Antarctic ice shelves as climate warming continues. Besides the normal phenomenon of iceberg calving, ice shelves that drift to warm climates can mimic one of the most dramatic things ice shelves can do: rapidly disintegrate.

The recent northward journey of Iceberg B-15J has provided the perfect opportunity to study the break-up process in detail.

Because the Moderate Resolution Imaging Spectroradiometer (MODIS) on NASA’s Aqua and Terra satellites sees every place on Earth at least once a day, MODIS proved crucial in tracking the iceberg’s movements in the vast southern ocean. After locating the iceberg fragments via MODIS imagery, staff at the National Snow and Ice Data Center (NSIDC) provided coordinates to a group of collaborators on the Formosat-2 team in Taiwan. Formosat-2 is in a special orbit, and has a highly manuverable satellite platform, enabling it to acquire a one-meter resolution image of anywhere on Earth, once each day. High-resolution imagery from Formosat-2 enables researchers to observe the details of breakup, as if a microscope had been aimed at the icebergs from space.

Warm ocean water doesn’t simply melt icebergs; the water exerts physical force on the ice, reshaping it in complicated ways. Ted Scambos of NSIDC, Douglas MacAyeal of the University of Chicago, and Cheng-Chien Liu of the National Cheng-Kung University in Taiwan have observed in the Formosat imagery evidence of three general processes of iceberg disintegration.

The first process can be described as ice waterline erosion. Heated by the Sun, warm water at the ocean surface preferentially melts away ice near the waterline, and waves lapping against the iceberg accelerate ice removal. Once significant amounts of ice have been removed from the iceberg at the waterline, the buoyant force of the water pushes parts of the iceberg up from below. As the water undercuts the iceberg edge, the upper parts of the berg fall into the sea. This eventually causes the iceberg to split from below, and break off at the edge. The process begins again on the freshly exposed vertical face.

The newly calved portion of the iceberg can present a strange appearance to the satellite sensor, with part of the ice looking like a deep trough. 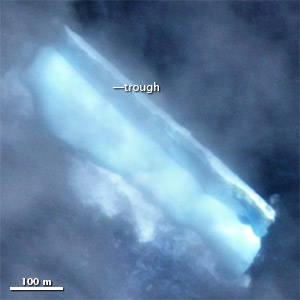 Another process (which may occur at the same time as edge erosion) involves melting and surface cracking. This cracking can arise from stresses that come from floating and flexing that occurs from waves in the open ocean. In a floating iceberg, the buoyant force of the water squeezes the sides of iceberg, causing the ice to arch up a little on top, potentially causing fractures on the ice surface. The cracks usually don’t penetrate deep into the berg, but if the iceberg has migrated into warm conditions, melt water can flow into those fractures, deepening them, and eventually slicing off pieces of ice. Several of the icebergs calved from B-15J showed meltwater flooding their surfaces. This is thought to be a key step in the disintegration process.

Cracks are evident in this iceberg remnant of B-15J. 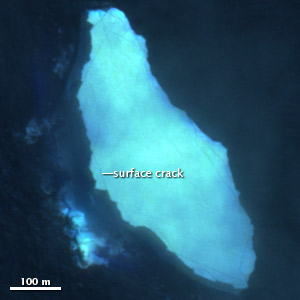 Although tiny compared to the original, Connecticut-sized iceberg from 12 years earlier, the iceberg fragments observed in December 2011 and January 2012 were still sizable, and when pieces of them calve off, they can make big waves. If those waves slam into nearby icebergs, those icebergs might also calve big pieces, making more big waves. The tendency to calve is enhanced by meltwater-filled fractures. Thus, the initial calving can lead to a runaway process where calving leads to waves that create more calvings on other icebergs (or, in the case of a warming ice sheet, other parts of the ice shelf). Dr. MacAyeal has likened this runaway situation to a mosh pit at a rock concert.

In observing the fragments of Iceberg B-15J, Formosat did not capture icebergs close enough to each other to create a mosh-pit phenomenon. But the sensor did capture calving icebergs and tsunami-like waves. 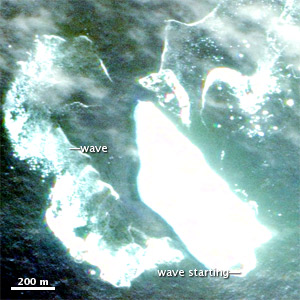 This entry was posted on Monday, February 13th, 2012 at 5:11 pm and is filed under Uncategorized. You can follow any responses to this entry through the RSS 2.0 feed. Both comments and pings are currently closed.

4 Responses to “For icebergs, breaking up can be easy to do”