Recently while doing something work-related (yes, really!), I stumbled upon a fascinating story.  I found the Gates of Hell.

It turns out that they are in Turkmenistan. They were built — in a manner of speaking — by the former Soviet Union in 1971.

In 1971, Turkmenistan was a part of the Soviet Union. Not far from the village of Derweze (in Russian, it is Darvaza), a Soviet drilling rig hit an underground cavern, which subsequently collapsed and formed a deep pit, almost a hundred meters across. It was spewing toxic gases.

In order to contain the hazard, the gases were set alight, with the expectation that the gas would burn off in a few days. A few decades later, though, the pit is still on fire.

Natural gas continues to seep into the crater at a significant rate, sufficient to keep the lights on much the same today as when the match got tossed in (figuratively speaking).  The Darvaza Gas Crater has since come to be nicknamed The Gates of Hell, and it has proven an unlikely and unusual tourist destination in the midst of the Kara-Kum Desert. Every desert really needs gas heat, after all.

Some have written and railed about what an environmental travesty it is to have all of that natural gas burning off. And certainly 40 years of open fossil fuel burning seems like no minor matter.  But a little perspective is in order. It is worth pointing out that the Gates may well be no more dramatic than a single large gas-fired (or perhaps a moderate coal-fired) power plant, of which there are a great many in operation for 40 years or more around the world.

The pit might also be compared to any of a number of natural features, such as active volcanoes. There’s a constantly molten pit of lava emitting hot, toxic gases  at the summit of Nyiragongo, for example, and it’s just as dramatic (maybe more) as the Gates of Hell.

Industrial accidents, malicious intent, and even natural events have lit fires that have burned for comparable periods elsewhere.  Centralia, Pennsylvania, had to be permanently evacuated, for example, after a 1962 trash fire reached an underground coal seam that has been burning ever since. (Poisonious carbon monoxide still seeps out of the ground.) Retreating Nazi sailors set the Mine #2 alight near Longyearbyen in Norway’s Spitbergen Island in 1944, and that fire burned for some 20 years. Wikipedia offers a whole catalog of coal seam fires, some of which have been burning for a century or longer! 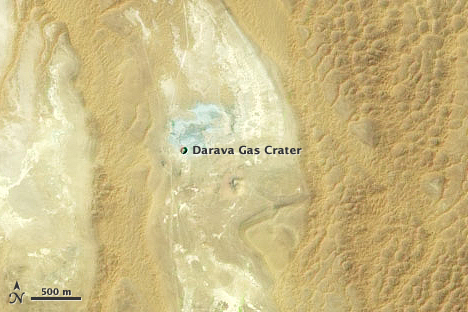 It’s hard to know when, or even if, the Darvaza Gas Crater might go out. But what I do know is that the Gates of Hell are not so interesting from a satellite perspective. The 100-meter-wide crater is certainly discernable in the moderately high resolution Advanced Land Imager (image above), and infrared emissions show heat coming from the flames.

But who knew the Gates of Hell would turn out to look, well, boring?

The Gates of Hell

The Door to Hell – Burning Gas Crater in Darvaza, Turkmenistan

This entry was posted on Wednesday, September 14th, 2011 at 11:17 pm and is filed under Uncategorized. You can follow any responses to this entry through the RSS 2.0 feed. Both comments and pings are currently closed.

5 Responses to “Gates of Hell”