Why does the Earth Observatory show some floods and not others?

Earth Observatory publishes many images of floods. The 2010 monsoon floods in Pakistan and 2011 floods in the Mississippi and Missouri basins have received a lot of coverage.

But we don’t publish photo-like images of every flood, and many readers wonder why. The severe floods affecting China this month are a perfect example. So far, we have only been able to visualize the rainfall in the region.

Multiple factors limit our ability to show floods, but perhaps the biggest is cloud cover. In a hurricane image, the clouds are the story. When it comes to flooding, clouds often hide the very trouble they have caused. An overflowing river or standing water on agricultural fields cannot be observed until clouds clear out of the way. Sometimes cloud cover lingers until the high water has receded.

Clouds obscure most of this MODIS image acquired on June 18, 2011.

And just as some parts of our planet are frequently sunny, other places—including some of the places frequently affected by floods—are consistently cloudy. (See the Cloud Fraction global map for more information.)

The duration and size of events also limit the ability of satellites to see flooding. Destructive as they are, flash floods usually occur so quickly that satellite sensors such as (MODIS) have little chance to observe them. Likewise, a flood can cause serious damage without spanning a wide enough area to be detected by a satellite sensor. When flood waters outlast the storm system that deposits them, a satellite sensor’s ability to observe flooding is improved, but not guaranteed.

All of these factors are complicated by something else. In the case of hurricanes, wildfires, and dust storms, the events by themselves are obvious enough for anyone to see. Flooding is different. Except for high-resolution shots from urban areas, flooding can be difficult to detect without a “before” image for comparison. So to show flooding, the EO team must not only find a cloud-free image of the flooded area, but also a cloud-free image of the same area under normal conditions. 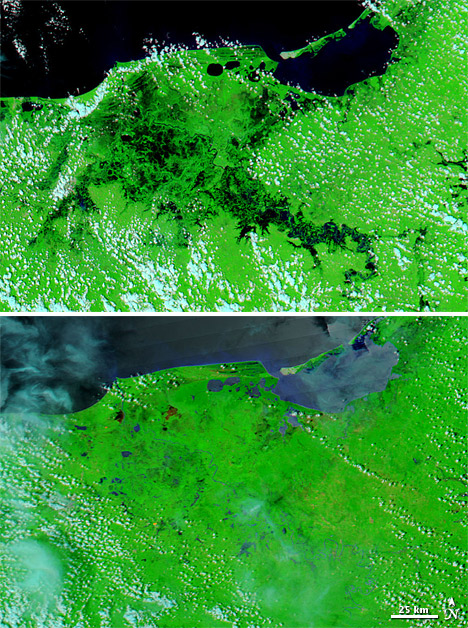 Flooding in southern Mexico on September 8, 2010 (top), is much easier to detect when compared to pre-flood conditions on September 9, 2009 (bottom).

When prolonged, heavy rain falls at low latitudes, we have a reasonably good chance of seeing it, thanks to the Multisatellite Precipitation Analysis produced at NASA’s Goddard Space Flight Center. The analysis estimates rainfall by combining measurements from many satellites and calibrating them against rainfall measurements from the Tropical Rainfall Measuring Mission (TRMM) satellite. The heavy rain in China has occurred in the right place and has lasted long enough to be visualized. Cloud cover and land cover, however, have hampered our ability to detect flooding on the ground. We may yet find imagery of this natural disaster. We will keep looking.

This entry was posted on Tuesday, June 21st, 2011 at 5:32 pm and is filed under Uncategorized. You can follow any responses to this entry through the RSS 2.0 feed. Both comments and pings are currently closed.

2 Responses to “Why does the Earth Observatory show some floods and not others?”