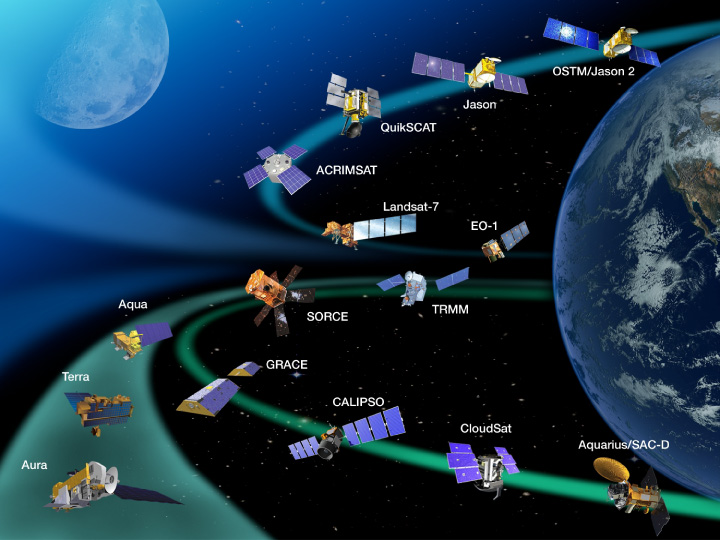 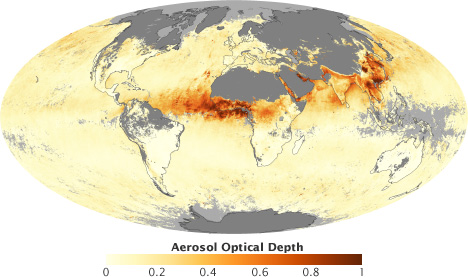 This week’s indicator: 76. No, that is not a reference to the return time of Halley’s Comet (76 years) or the atomic number of the world’s densest natural element (the metal osmium). In this case, 76 is a percentage.  And it’s a particular percentage that represents how much of the variability in North Atlantic sea temperatures new climate simulations attribute to small airborne particles called aerosols. British scientists at the Met Office Hadley Center ran the simulations, and Nature published the numberin a recent issue.

North Atlantic sea temperatures have gone through warm and cool phases over the last 150 years (a phenomenon called the Atlantic Multidecadal Oscillation, or AMO). The sea was cool, for example, during the 1900s–1920s and 1960s–1990s, while a warm phase occurred in the 1930s–1950s (see graph below). Since the mid-1990s, the North Atlantic has been in a warm phase.

That may sound like arcane trivia, but the cycling of North Atlantic sea temperatures matter. Earlier research has linked its phase (warm or cool) to high-stakes weather events, such as the frequency of Atlantic hurricanes and drought in the the Amazon Basin and the Sahel. Cool phases, for example, have coincided with decreased rainfall in the Amazon, more Atlantic hurricanes, and increased rain in the Sahel.

Conventional wisdom has held that the cycling of North Atlantic sea temperature is a natural phenomenon driven by ocean currents. The new climate simulations suggest that aerosols are the real culprit. The British team considered a number of aerosol types in their analysis but the most important was one called sulfates, which come from volcanic eruptions and from humans burning fossil fuels.

The researchers used a state-of-the-art climate model to see if they could reproduce the changes in North Atlantic sea temperatures seen over the last 150 years. This wasn’t the first time scientists have tried this, but it was the first time any group did it so accurately. And the key to their success, the British team concluded, was that they incorporated better estimates of how aerosols affect clouds—something that most previous models omitted or only partially included.

How do aerosols (for the sake of simplicity, let’s just call it pollution for the moment) affect clouds and how does that affect sea surface temperature?  In short, pollution tends to brighten clouds (see illustration above) causing the clouds to reflect more light back to space and cool the sea.

After taking this indirect aerosol effect into account, the British team’s simulations suggested that the majority (the number they came up with was, of course, 76 percent) of the observed variability in sea temperatures seen since 1860 was due to cooling caused by sulfates from volcanic eruptions and from the buildup of industrial pollution. The results of the simulation also imply that sea  temperatures have risen in recent decades because clean air regulations passed in the United States and Europe in the 1960s and 1970s have reduced levels of air pollution.

If the new simulation is right, it would be a big deal. It would not only mean, as a Nature News & Views article pointed out, that humans are the key factor driving changes in sea surface temperatures (and that cleaning up the air could be fueling hurricanes); it would also mean that the Atlantic Multidecadal Oscillation (AMO) doesn’t really exist.

Before you start mourning its death, however, realize there are some indications that this latest simulation may not be right. Understanding how aerosols affect clouds remains a young science, and the British team may have made some incorrect assumptions about how aerosols affect particular types of clouds. Plus, the model didn’t reproduce changes in the frequency of outbreaks of African dust storms, something that can affect the temperature of the tropical Atlantic. On top of all that, a number of other studies have come to very different conclusions.

Bottom line: stay tuned. Things can get messy at the cutting-edge of science, but we’ll be keeping our eye out to see if and how long the 76 percent number holds.

Science is full of numbers and here at the Earth Observatory we know they can sometimes be contradictory and confusing. In our new Earth Indicator column, we’ll pick a number from the many floating around in the science or popular press, unpack where it came from, and explain what it means. Also, a tip of the hat to NPR’s Planet Money team. They have a Planet Money indicator on their podcast that we like so much we decided to steal the name.