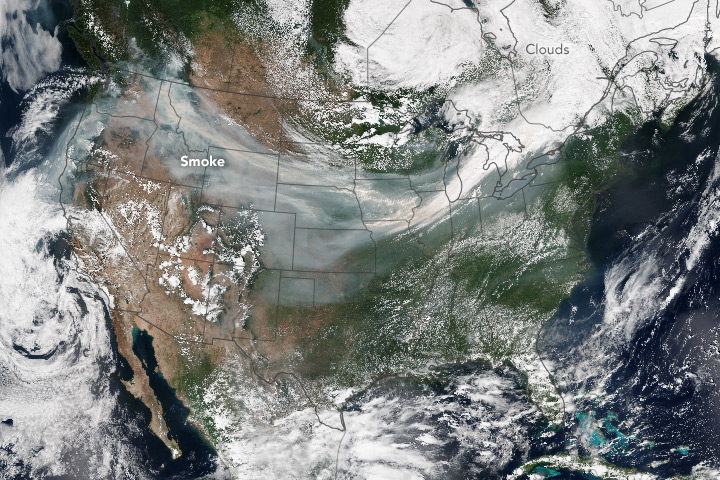 You have probably heard or read that it has been rather smoky out West this year. Dozens of large wildfires have raged through forests in British Columbia, Alberta, Washington, Oregon, Idaho, California, and other states this fire season. Intense blazes are lofting up so much smoke that huge plumes have been blowing across the country—and even turning up in Europe. We checked with a few scientists who specialize in studying wildfires for an update on what is going on.

EO: How does this fire season compare to past years?
The western fire season has been quite active this year. British Columbia has surpassed its greatest burned area in the modern era. While its unlikely that this season will be record-breaking in the western U.S., it is above normal relative to the past decade, which has seen abundant fire activity.
— John Abatzoglou, University of Idaho

EO: Is climate change exacerbating these fires?
Because we have let fuels build up in the western U.S., it is difficult to tell in many ecosystems what is weather-driven vs. climate-driven until we get back to normal fuel loads. This 2013 PNAS paper tries to answer the climate question given the artificially increased fuel loadings. They found that climate change is responsible for 55 percent of the observed increasing fuel aridity.  — Jessica McCarty, Miami University

EO: Are bark beetles making these fires worse?
No, the bark beetle outbreaks have little-to-no relationship with trends in area burned or the ecological severity of fires. I think this continues to be a big misconception with the public, which is understandable because climate is a key driver of both bark beetle outbreaks and wildfires. Many people jump to the conclusion that bark beetle outbreaks are causing fires. But it is likely a classic case of correlation without causation.  — Brian Harvey, University of Washington

EO: If there was one thing you wished Americans understood about wildfires in the West, what would it be?
Be careful with fire. Smokey the Bear is trying to educate you on the risk—listen. Heed fire risk and fire weather warnings. Don’t build campfires unless you have to. Don’t go off-roading during droughts and heat waves. Be careful with your cigarette butts.  — Jessica McCarty, Miami University

Even though no one is a fan of widespread smoke, wildfires aren’t inherently “bad” [when they are in unpopulated areas]. One continuing challenge is figuring out how to live with fire as part of the system as more people settle in the region during an era of changing environmental conditions. — John Abatzoglou, University of Idaho

This entry was posted on Tuesday, October 10th, 2017 at 10:51 am and is filed under Natural Hazards, Roundtable. You can follow any responses to this entry through the RSS 2.0 feed. Both comments and pings are currently closed.