The Red Team drilling an ice core of sea ice.

May 30, 2016 — This morning we did another modeling exercise, led by Jen Kay of the University of Colorado. A question a sea ice scientist inevitably gets asked is “so, when is the Arctic Ocean going to become ice free?” I can understand the interest, but answering it is quite difficult. One reason of course is that the sea ice models are not perfect – we don’t know exactly how the sea ice will respond to warming temperatures in the future. But the main reason is that the climate naturally varies from year to year and over many years, just due to randomness in the climate system. Jen and others have found that the natural variation in sea ice is quite large. The implication is that even under warming temperatures, variations in the climate system may result in many years where the extent doesn’t decrease and may even increase for several years. 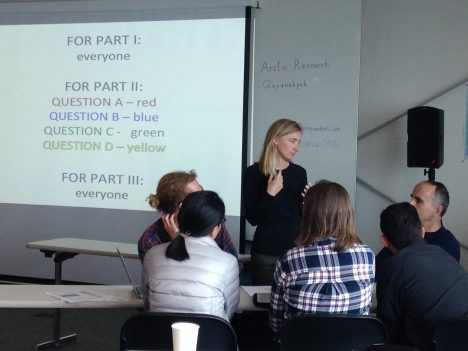 The Red Team in the classroom.

This means that we can’t extrapolate from current trends to estimate the year ice-free conditions occur because the current trends may well be interrupted by natural variations. It also means that even if we have several years where the extent doesn’t drop, it doesn’t mean the warming isn’t having an effect – it just means the warming effect is overwhelmed, temporarily, by a natural cooling effect. It’s like driving a car down a mountain – eventually you’ll get to the bottom, but on the way there may be many flat spots or even sections of the road that go uphill.

In the afternoon, our group did the sea ice properties activity. This involved drilling a core through the ice and analyzing it. Sea ice is not simply frozen water – it is frozen salt water. Although most of the salt escapes during the freezing process, some salt gets trapped in the ice in briny pockets of very high salinity water. Over time, these pockets begin to drain (especially during the summer melt), leaving little channels within the ice. In the core, we noticed the brine already starting to drain after we lifted it out of the hole. These brine pockets are important in determining how the ice melts and interacts with the ocean. 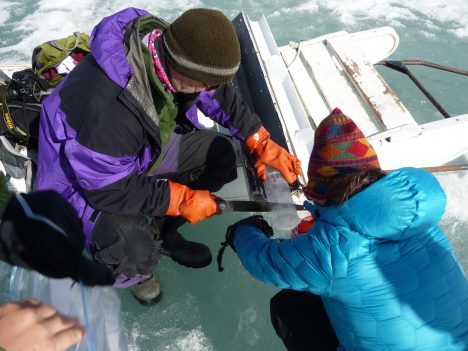 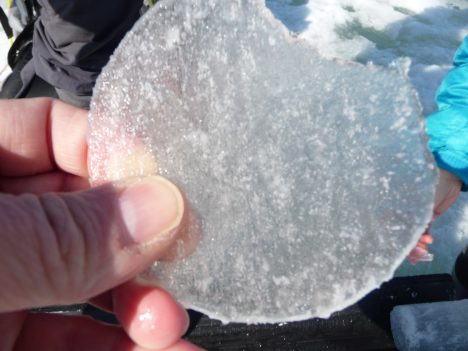 A section of a sea ice core.

We also measured the salinity and temperature in the water near the base of the core. The water was near freezing throughout, as expected. But the salinity was quite low just beneath the bottom of the ice. Normally, the ocean salinity should be around 30 ppt (parts per thousand), but below the ice, the salinity was only about 2 ppt. This is because the fresh surface melt water was draining through the ice. Several centimeters lower, we saw the salinity increase rapidly to near 30 ppt.

Today was Memorial Day, so it’s worth noting that Barrow has a long history of being involved in defense activities. We are staying and working at the Naval Arctic Research Laboratory, which as the name implies was a military research station. We can also see nearby the DEW (Distant Early Warning) Line station, which was an early warning defense system to detect ballistic missiles that could’ve been launched by the Soviets. The soldiers that served in the DEW Line stations were literally on the front lines of the Cold War. So it seems appropriate to be here in Barrow on the day honoring those that have served and made the ultimate sacrifice for their country.

This entry was posted on Wednesday, June 1st, 2016 at 10:49 am and is filed under A Satellite Scientist Visits the Ice, Alaska 2016. You can follow any responses to this entry through the RSS 2.0 feed. Both comments and pings are currently closed.

One Response to “Memorial Day On Ice”