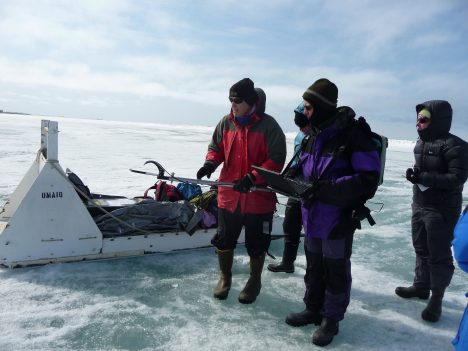 May 29, 2016 — This morning, we had our second modeling exercise, led by Ian Eisenman of the University of California, San Diego, where we investigated whether sea ice loss is irreversible – i.e., is there a tipping point for sea ice, a point of no return? In the simple models, like the one we used yesterday, once the sea ice disappears under warming temperatures, the ice does not come back even if temperatures cool back down to where they started. This means the loss is irreversible. However, the ice loss is reversible in more sophistical models such as those used for most future climate projections. So are the simple models missing something essential, or do the more sophisticated models get it wrong?

We examined an in-between Goldilocks model –not too simple, not too complicated– and found that the simpler models do miss important processes, such as the fact that heat diffuses into larger regions. This spreads out and slows down the ice-albedo feedback so that if the temperatures cool, the sea ice will come back.

In the afternoon, my group did an optics exercise out on the ice. This primarily involved measuring albedo of the ice. Albedo is basically the proportion of sunshine that gets reflected by the surface. At its simplest, it can be thought of as the whiteness of the surface. A perfectly white surface reflects all of the sun’s energy and has an albedo of 1 and a perfectly black surface will absorb all of the sun’s energy and has an albedo of 0. Albedo is key for sea ice because the ice has a much higher albedo than the ocean. So as temperature rises, the ice decreases, the albedo drops and more energy is absorbed. This added energy warms things further and you get what is called the sea ice albedo feedback, which amplifies the effects of warming temperatures. But the ice doesn’t need to disappear to have the sea ice albedo feedback. Changes on the ice surface – such as melting and ponding – also reduce the albedo. 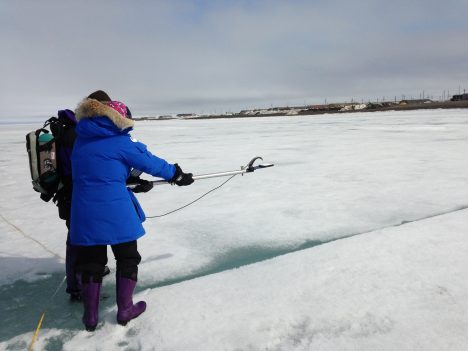 Our goal for the day was to measure albedo along a 100-meter (328-feet) line across the ice. It was our first day here with substantial sunlight; we had blue skies interspersed with clouds. Unfortunately, this was a bad day for albedo: to get good measurements, consistent light is desired. So the intermittent clouds make things difficult. Don told us that normally, if he were in the field in such conditions, he would skip the albedo measurements and drill some thickness holes instead. But we went out and gave it our best effort. 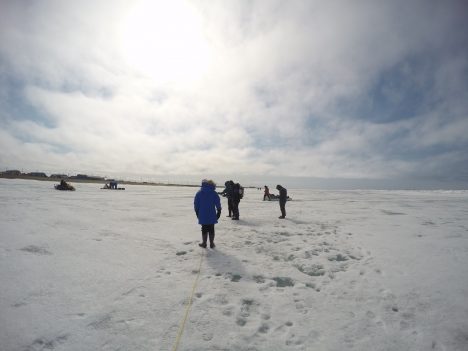 In the evening, we had a visit from two native Inupiat whale hunters, Billy and Joe. They told us how hunting bowhead whales is a fundamental part of their culture. The hunters go out onto the ice to the edge of fast ice (ice attached to the coast) and wait for the whale to surface. When they catch a whale, they bring it up onto the ice and share it with the rest of the community. Sharing is part of the fabric of their society – though the hunters make the kills, they are supported by the entire community. At the end of the whale-hunting season in June, there is a big celebration throughout the town with food, music, and dancing.

Because they use the ice to hunt, the Inupiat have intimate knowledge of the ice cover. They have shared this knowledge with scientists; this provides a valuable complement to our scientific data because they see things that satellites, models, and even scientific field observations don’t. For example, they can sense the softness of the ice, indicating a weaker ice cover. They also provide a long record from their personal observations and oral histories passed down over generations. The hunters mentioned how the fast ice used to extend at least 4 miles from shore, but now it only about half that distance. The ice moves out earlier as well, which affects their seal hunting. Also, there used to be a lot of multiyear ice in the area, but now it is rare.

The Inupiat work with the scientists to better understand the changes in the sea ice and their changes on the community. The scientists also help Inupiat by providing data and scientific guidance. With the changing ice conditions, going out on the ice has become more dangerous for the Inupiat – ice floes can break off without warning, stranding hunters. They now can use the Barrow sea ice radar to see how the ice is moving to get a sense of when and where it is safe to go out onto the ice. It was really interesting to hear the perspective from the local community, an essential source of knowledge that provides a view of sea ice that we scientists don’t get in the field, in our models, or in our satellite data.

This entry was posted on Tuesday, May 31st, 2016 at 5:07 pm and is filed under A Satellite Scientist Visits the Ice, Alaska 2016. You can follow any responses to this entry through the RSS 2.0 feed. Both comments and pings are currently closed.

One Response to “Tipping Points, Albedo, And The Local Perspective”