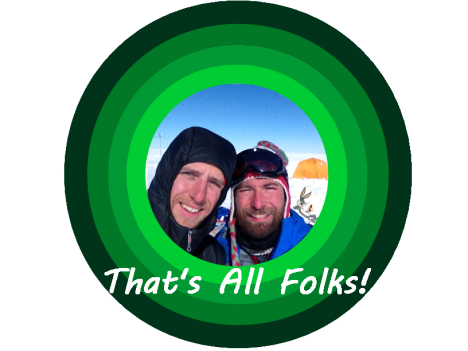 After an unexpected phone call from the helicopter pilot on Easter Sunday, Ludo and Clem ended the second season of the Greenland aquifer campaign, with the support of Susan, Rick, Lora, Bear, the weather office, and many others. Thanks all for this Easter bunny.

We still wonder whether our campaign was successful, or fair. For sure, it was a mix of good and tough times.

The pluses, making our campaign a good time:

– We’re back from our field site, healthy and with all our fingers and toes!

– We set up an almost perfect camp, limiting drift considerably.

– We had saucisson (dry cured sausage), and cheese for fondue!

– No polar bear smelled our food!

– We installed an intelligent weather station developed by the group at IMAU, in the Netherlands.

– We drilled down to 28 feet (8.5 meters) to record the density and stratigraphy of the ice layers.

– We have GPS taken positions during a week, which will help us calculate the velocity and flow direction of the ice in this basin.

The minuses, making our campaign “different”:

– Ten days of weather delays before the put-in flight to our ice camp location.

– Rick could not make it to the field with us.

– We never had three consecutive half days with weather suitable for work.

– Getting a sore throat from shouting to hear each other less than a meter apart.

– During the one day of great weather, we tried to drive down a pilot tube to install a piezometer in the aquifer. This technique is adapted for ground water found within rocky soils. It was the first attempt to do it in the Greenland firn. Driving the metal pipes in the snow through the ice layers was a nightmare, we had to pound on those pipes really hard to make them go through the thick ice layers and we ended up breaking them. At one point, we thought it was broken slightly deeper than 6 ft below the surface, so we dug a pit down to fix it. Well, it turned out that the broken piece was actually 13 ft down — we spent the only full day of great weather breaking our equipment.

– We ran out of cheese for fondue, and of saucisson.

– Sunscreen was completely useless this season.

– 30 m/s wind is brutal, though not necessarily hilarious.

– High-wind speed does not make the clock spin faster, only the anemometer.

– Supporting text messages and jokes from our family, colleagues, and office mates.

– Attempting a radar survey with a sled taking off every other gusts.

– Calling the Met Office for a weather forecast: “Hello! Since it’s windy here we are wondering what will happen in the next 36 hours.” “Yes, I can confirm that you are experiencing wind.” “Thanks so much for the confirmation, but there was no room for doubt.” “Oh, but it’s a nice spike on the computer screen! It won’t blow more, but it won’t stop soon. Be careful out there”. Patience with Mother Nature is the #1 fundamental.

– Coastal storms from the East might be our favorite storms on the ice sheet: wind stops, and temperatures increase, but it snows, snows, and snows.

– Sixteen feet of seasonal snow is deep, especially with the top 2 feet of fresh snow becoming harder and harder as they it gets compacted by the wind.

– Excavating 1765 cubic feet of snow between 8pm and 11:30pm (you got to use the weather window whenever you have it.)

– The frost all around our sleeping-bag head every morning.

– The 40 hours laying down in the sleeping bag.

– The melody of the wind on our tents and through the bamboo sticks we stuck around them.

– The pilot phone call at 8 am on Easter Sunday: “Good morning, happy Easter! Don’t go for a ski strip today, we will come pick you up in 3-4 hours!”

This was the synopsis of our 13-day adventure on the ice sheet. Even though we have been pulled out from the ice sheet, we still have some work to do, such as cleaning and drying our cargo and repackaging it for shipping to either Kanger, or the US.

Now, we would like you to enjoy some photos taken in the field. Thanks again for spending some times reading the blog and following us! Until the next campaign, enjoy each season and stay warm! As we say in French: “En Mai, fait ce qu’il te plaît!” In English, it translates to something like: “In May, do as you please!”. Yup, we’re heading back to the office and will hide behind a computer screen for the months to come.

(Left) As weather-delay days continue to keep us in town, Rick calls the weather office to assess whether we can afford to spend more days waiting to be deployed on the ice sheet. (Right) The saddest moment of our campaign, when Rick had to remove his gear from our cargo because he wasn’t coming with us to the field. 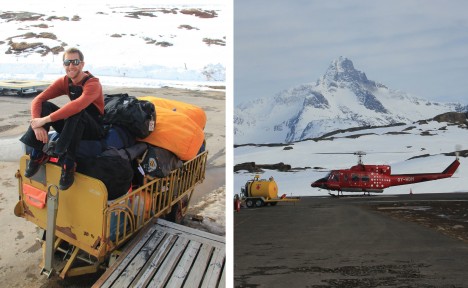 (Left) At the Tasiilaq heliport, Ludo waits for our put-in flight on the cargo. (Right) The Air Greenland B-212 helicopter with blue skies and high clouds. After 12 days of patiently waiting, it looks like it’s a go! 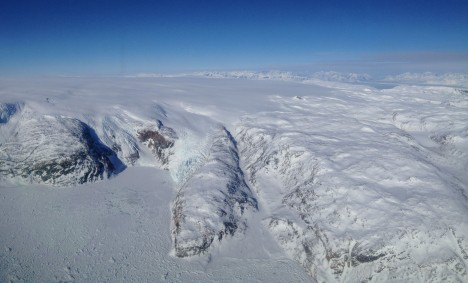 Flying over the sea-ice covered Sermilik fjord to reach the ice sheet.

Getting closer to the ice sheet, flying over crevassed tributary glaciers.

(Left) Our cargo, dropped almost two weeks ago, got buried under 2 feet of snow. But all the pieces were there! (Right) The B-212 landed near our cargo for a final move to the ice camp location. 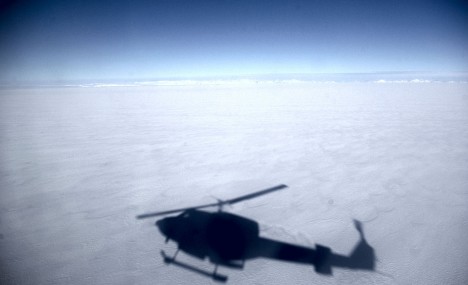 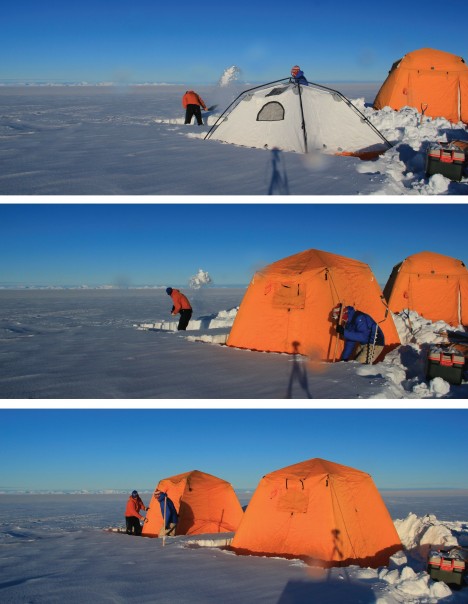 Minutes after the B-212 had left Clem and me on the ice sheet, we were already shoveling the fresh snow to install our cooking and sleeping tents before dark. This was no time for play, this was no time for fun, there was work to be done.

Our first pretty sunset in Greenland. In one month, we saw two of them. 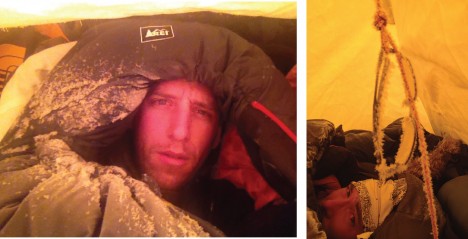 Early morning selfie! Not fully ready yet to put our cold weather gear on. 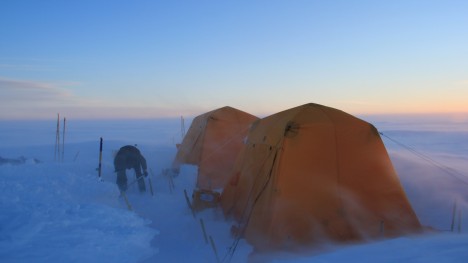 Shoveling, a typical activity at camp. Luckily this year we did not have to shovel too much to maintain our tents. 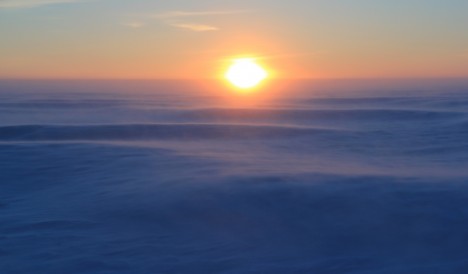 With the amount of fresh snow and the katabatic winds increasing, snow dunes were forming perpendicular to the direction of the wind — it was like being at sea! Half a day later, sastrugis developed along the wind direction and snow became hard and compact. 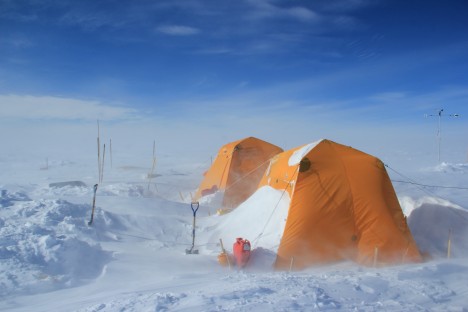 A snow drift blocking the door of the kitchen tent. 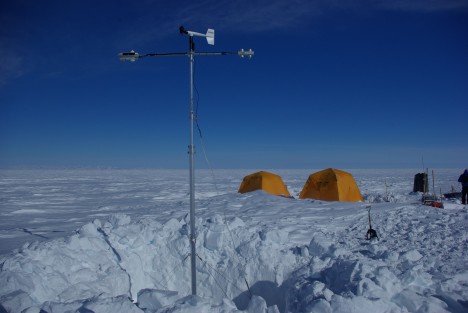 The IMAU intelligent Weather Station, installed in its snow pit before we refilled it. 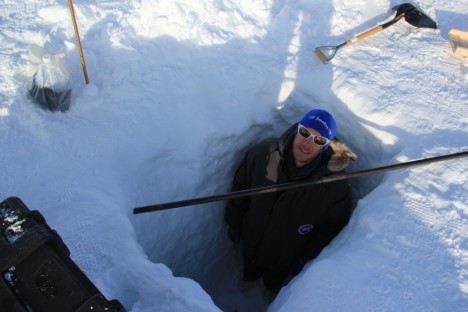 Ludo inside a 2-m-deep pit dug with the hope to repair a broken pilot pipe for installing a pressure transducer in the aquifer. 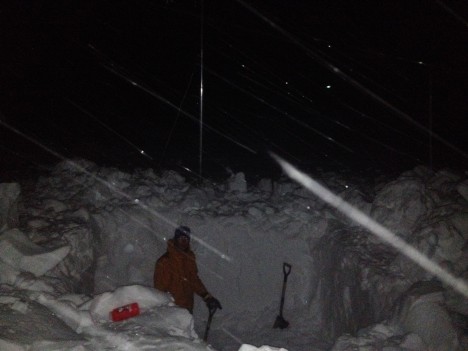 Ludo, inside a larger 2-meter-deep pit dug after dinner with easterly winds increasing as another coastal storm was coming bringing more snow. Our rationale was that the sooner we dug, the less snow we’d have to remove. 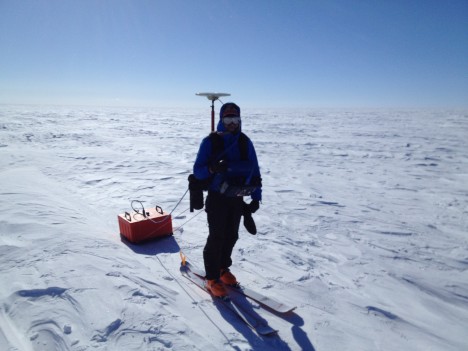 Two hours before being pulled out from the field, Clem was dragging the 200 MHz radar, and carrying a GPS unit.

(Left) Snow accumulated on our tent entrance overnight. We monitored it carefully every half hours from 2 am to the late evening. We took care of it a couple of times! (Middle) Clem calling the weather service to find out what wind speeds would hit us during the night. (Right) Our last saucisson, hanging over the snow/water pot. 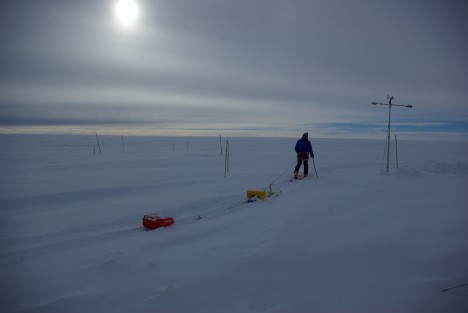 Clem uses an evening break in the weather to drag a low-frequency radar in the fresh snow deposited in the previous hours. 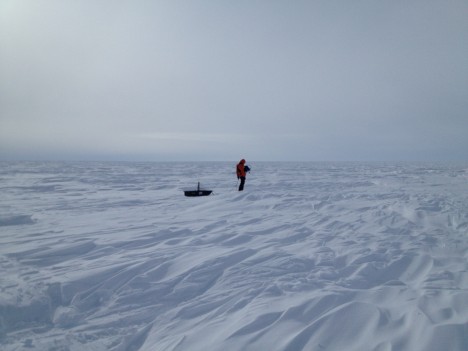 Clem dragging the 400 MHz radar over the sastrugis, a challenging surface to work with. 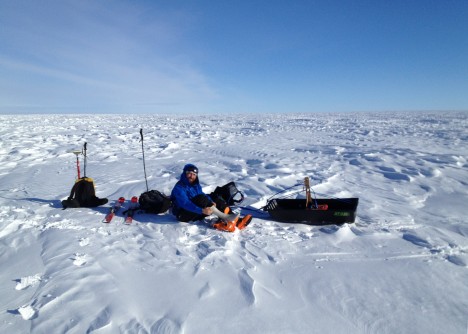 Weather was clement enough with Clément to allow him for a pit stop during our half-marathon radar day around camp. 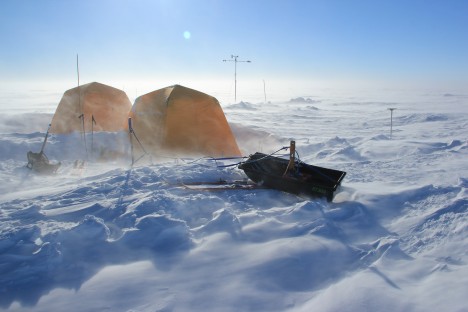 A new day, different weather, and another attempt to collect more radar data. Since we aimed at collecting surface-based radar data, not airborne radar data, we quickly had to stop because the wind would make the radar system take off with every other gust. 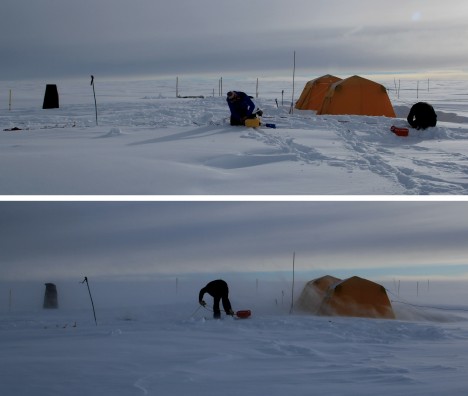 Pictures taken just one hour apart. In the top one, we were setting up a radar system. In the bottom one, we were actively wrapping it due to sudden katabatic winds that picked up in less than 10 minutes. 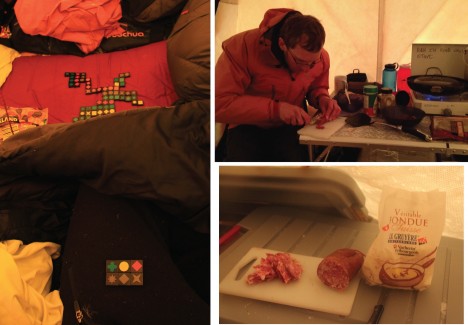 Indoor activities while the winds prevented us from working. (Left) Playing domino with mitts in a shaking tent, unforgettable times! (Right) Good food to keep us happy. Merci maman for thinking about us before leaving home.

Our flight back had already been canceled twice. It turned out that this was our last evening at camp. We had a total of two pretty sunsets: one on the first day and the second 12 days later, on our last evening. 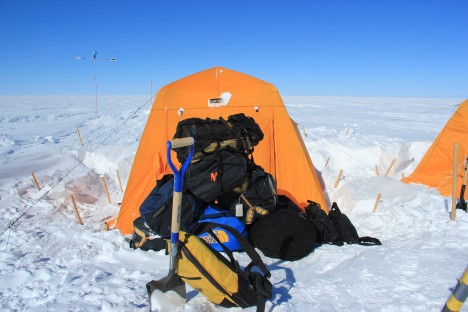 Our bags, ready for a surprise pull-out flight! Happy Easter! 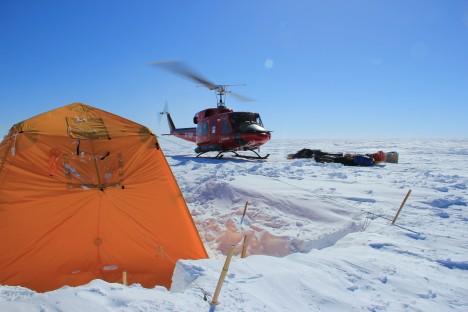 A great moment: the landing of the B-212. We were being pulled out! 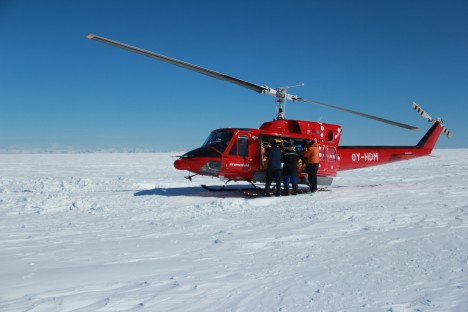 The crew and Ludo finish up loading the B-212. 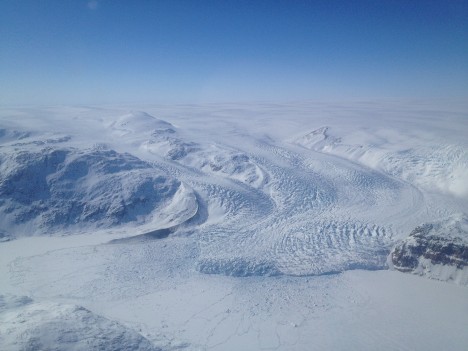 Last view of the ice sheet and glaciers. 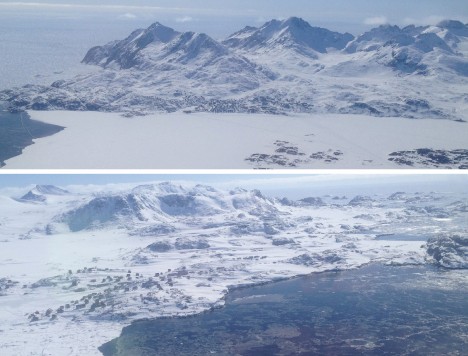 Forty minutes after leaving our camp, we see signs of life: a view of Tasiilaq (top) and Kulusuk (bottom), minutes before landing.

We’d like to finish with this quote from the French explorer Jean-Baptiste Charcot, who led the second French expedition in Antarctica around 1910:

This entry was posted on Wednesday, April 23rd, 2014 at 3:04 pm and is filed under Greenland Aquifer Expedition. You can follow any responses to this entry through the RSS 2.0 feed. Both comments and pings are currently closed.