Back On Dry Land 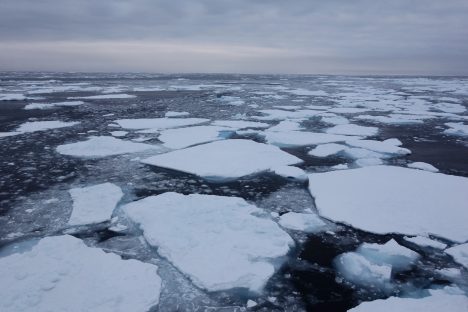 A mix of old and new sea ice floating through the northern Beaufort Sea during one of the last days of the cruise that we observed sea ice.

After 65 Rosette casts, 59 XCTD probes, 61 Bongo tows (nets that collect zooplankton samples), 212 surface water profiles, 40 ocean drifters released, three buoys deployed, one buoy recovered, three deep sea moorings collected and redeployed, eight ice cores collected, and 27 scientists deployed and partially recovered, our expedition around the Beaufort Gyre is finally over! The cruise was a huge success, with virtually all instruments operating successfully. The only downer was the lack of sea ice and our inability to get out onto the ice after Ice Station 1. The lack of ice wasn’t actually a problem for most of the scientists onboard, as they were more focused on measuring the state of the ocean, with the lack of sea ice providing interesting, albeit worrying, context for their measurements compared to previous years. 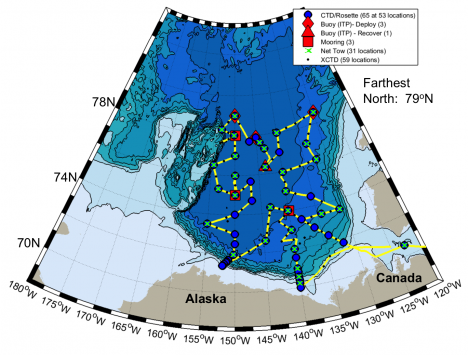 As I said back in my first blog entry, one of the key objectives of the expedition was to produce an up-to-date assessment of the freshwater content of the Beaufort Gyre. Based on a preliminary analysis of the data collected on this cruise, my colleagues reckon the total freshwater content of the Gyre could be at a record high. A chemical analysis of the ocean surface suggests that sea ice melt contributed around 20 percent of the fresh water mixed up within the surface waters, compared to around 80 percent from Canadian and Russian rivers flowing into the Arctic. The sea ice contribution was thought to be neutral a few decades ago, but the ice is now melting more than it’s growing, as we clearly witnessed, causing an imbalance. The wind circulation is also important in driving the ocean circulation that sucks in fresher surface waters into the Gyre (see an earlier blog of mine for more details).

Why does this all matter? Well, some scientists posited that the Beaufort Gyre oscillates between periods of spinning up and sucking in freshwater, and spinning down and releasing fresh water. A kind of breathing, if you like. The Gyre has been spinning up and sucking in fresh water for a few decades now (2008 saw a big increase) and we keep waiting, with similarly bated breath, for this trend to reverse. If the Gyre does reverse (breathe out), the Arctic Ocean will likely dump a load of fresh water into the Atlantic Ocean (as we think it did in the 1970s), which could cause some big impacts on weather patterns across the Northern Hemisphere. We’re not expecting a scene out of The Day After Tomorrow, but we’re not entirely sure what could happen either. 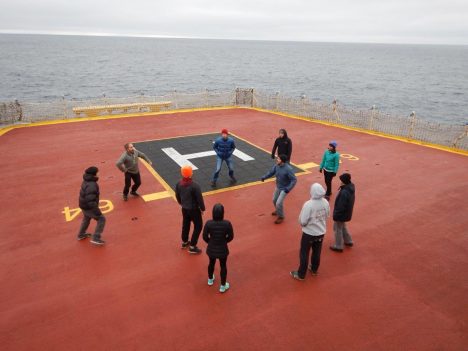 Hacky sack on the helideck. You can spot me by the bright orange hat.

It will take scientists a while to pour through all the data collected on this cruise and place this year’s findings into context. We spent our last few days compiling reports to summarize and document the data collected (in between games of hacky sack on the helideck). I’ve taken a look at some atmospheric data since I got back, and it appears the Beaufort Sea region was experiencing really warm, maybe even record warm, air temperatures throughout October. The data collected this year could therefore offer us a glimpse of what might be a new normal for the Beaufort Gyre and other regions across the Arctic Ocean.

I wasn’t able to cover all the science that happened on the ship during this blog series, but I hope you got a flavor for some of our primary scientific activities and have a better understanding of why it is we keep coming back to profile the Beaufort Gyre. I’m not sure if I will be out again next year, but I’ll be sure to let you know if I do. Thanks for reading, and do get in touch if you have any questions!

The Joint Ocean Ice Study  is a collaboration between the Department of Fisheries and Oceans Canada (DFO) researchers with colleagues in the USA from Woods Hole Oceanographic Institution (WHOI). The scientists from WHOI lead the Beaufort Gyre Exploration Project,  which maintains the Beaufort Gyre Observing System as part of the Arctic Observing Network. In addition to WHOI and DFO, the 2016 participants (those on board plus those on shore) come from three Japanese, five American, and six Canadian universities and research laboratories. Annual sampling of set oceanographic stations and mooring re-deployments since 2003 aboard the CCGS Louis S St-Laurent have built a time-series of physical and chemical properties of seawater, phytoplankton, zooplankton, and ice observations reaching from shelf waters to 79N across the Beaufort Sea. More information can be found on the Fisheries and Oceans Canada website.

This entry was posted on Tuesday, October 25th, 2016 at 3:12 pm and is filed under Beaufort Gyre Exploration Project 2016: Searching for Sea Ice. You can follow any responses to this entry through the RSS 2.0 feed. Both comments and pings are currently closed.

4 Responses to “Back On Dry Land”