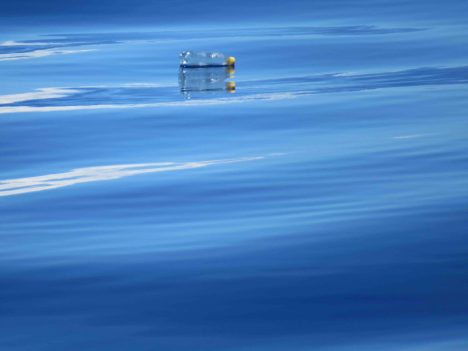 Plastic bottle floating by the ship.

A 1960’s movie classic, “The Graduate” (1967), contains a scene where the young Benjamin Braddock (Dustin Hoffman) is given advice about his future by the worldly Mr. McGuire (Walter Brooke):

Mr. McGuire: I want to say one word to you. Just one word.

Mr. McGuire: Are you listening?

Benjamin: Yes, I am.

A report from the World Economic Forum earlier this year estimates that the weight of plastic in the ocean will equal the weigh of fish by 2050. According to the report the worldwide use of plastic has increased 20-fold in the past 50 years and is expected to double again in the next 20 years.

Ocean pollution by plastic has been worrisome for years, but the global prevalence of plastic in the ocean and the full impact of its consequences are more recently appreciated. Plastic breaks down at sea into “microplastics” that are now part of the floating plankton – the base of the food web in the ocean. So, plastic is increasingly found in the stomachs of marine organisms. Recent estimates put the amount of plastic floating in the world’s oceans at more than 5.25 trillion pieces weighing more than 268,000 metric tons. That translates to as much as 100,000 pieces per square kilometer in some areas of the ocean. This is a new ocean habitat know as the plastisphere.

The plastisphere is a new waterfront mobile home for marine microorganisms. It potentially provides a floating home for microbes to take long tours of the ocean that were heretofore impossible. The ecological implications of this new globalization of the ocean microbial biota have yet to be determined.

Marine debris is not all plastic and has many sources. However, dumping from ships at sea is NOT the major source. Dumping at sea has been highly regulated for more than 30 years. The major source of plastics and other debris in the ocean is from land sources and river runoff.

Dan Clark with two of his nearly 50 bottles of samples for investigation of ocean microplastics.

In SPURS-2 we are very far from land – 7.5 days transit by ship from the Hawaiian Islands. Yet, still, we spy plastic bottles, shoes, fishing gear, and other unidentifiable debris at the surface of the ocean every day. We also have evidence that microplastics exist here. A UV filter, part of the water intake to one of R/V Revelle’s new thermosalinograph systems (Underway Salinity Profiling System) inadvertently acts as a microplastics sampler. Floating plastics, fibers and ocean detritus accumulate in the UV filter chamber that used to sterilize the saltwater sample prior to salinity sensing. The debris in the filter must be cleaned frequently to keep the system in working order and prevent bioaccumulation in salinity sensor. This thermosalinograph system was not designed for studying ocean debris, but it is a plenty worrisome observation. Dan Clark from University of Washington’s Applied Physics Laboratory is keeping the daily samples for analysis after SPURS-2. This a nice example of citizen science undertaken through the curiosity and personal initiative of Dan over and above his many other duties. Now he just has to figure out how to deal with the unusual sampling protocol!

The ocean is actually quite forgiving as a disposal site for human detritus in moderation, except plastic. Organics can be recycled by marine life, wood is disposed of quickly by boring worms, metals can be corroded by seawater, but plastic cannot be dissolved or digested. It is only humans who create and produce plastic goods. It is only humans who can dispose of plastic properly. Plastic MUST be recycled or disposed in landfills. Plastic has no business being in the ocean. We can only hope that the plastisphere we have created can be tamed and that it does not spawn deadly new microbes by virtue of its existence.

So, next time you are using a plastic good, make sure its afterlife is not in the plastisphere of the ocean. Benjamin’s retort to Mr. McGuire should have been “Yes. Mr. McGuire. Plastics are the future. If we can find proper ways to dispose of them!”

This entry was posted on Wednesday, September 14th, 2016 at 3:44 pm and is filed under Salinity Processes in the Upper Ocean Regional Study (SPURS). You can follow any responses to this entry through the RSS 2.0 feed. Both comments and pings are currently closed.

One Response to “One Word”