The Sticky Mess in the Tarball 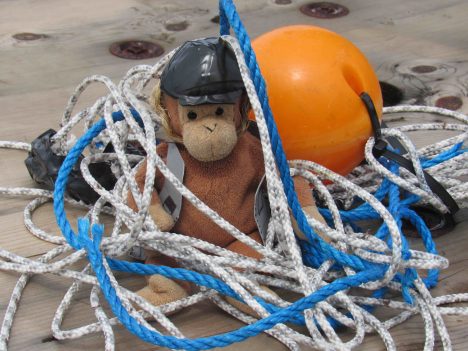 Monkey makes its own mess!

Long ago on a planet very similar to our own, oceanography was done without the Internet or regular communication with shore. It required careful planning and forecasts of the conditions to be encountered were vague at best. Executing the original plan of work for a voyage was always a good objective.

Unlike those days on that planet, the shipboard work of SPURS-2 seeks to optimize our operation as we go by depending on a “dry team” ashore for a daily flow of information. The information comes from a number of sources including satellites, in situ data (data collected in place), models, and combinations of these sources. The daily flow of information comes to us via the Internet in a “tarball.” In computing, tar is a computer software utility (originating from Tape ARchive) for collecting many files into one archive file, often referred to as a tarball. Scientists on R/V Revelle receive the daily tarball assembled by our dry team at the NASA Jet Propulsion Laboratory (in association with many SPURS-2 scientists ashore). The tarball contains files for daily weather and oceanographic analysis and a wealth of ancillary information. The tarball is information desired by the team aboard the ship, a key point that should not be overlooked in the following discourse.

Well, you can see where I am going with this: a tarball is also a blob of petroleum that has been weathered after floating in the ocean, sticky marine debris from the age of oil spills. With all due respect to the efforts of the dry team, commonality of the computing and oil tarball terminology becomes all too clear when one tries to reconcile the complex flows of data from both the tarball and the vast array of instruments on the ship. The tangle of seemingly conflicting information can make you feel like you are dealing with a tarball of the sticky black variety!

The tarball does focus our attention by feeding back to us our own observations. After R/V Revelle has deployed moorings, drifters, and floats we might receive back meteorological data from the central WHOI mooring, profiles from the NOAA moorings, trajectories of surface drifters, and profiles from the Argo floats. This real information may or may not conflict with what we imagined we would see (and built our plans around). So, this tarball pushes us into consideration of whether our plans going forward need revision or remain sound.

For example, the tarball is always an implicit invitation to re-consider the planned work to take account of current or forecast conditions. Ostensibly this information enables us to make the most of our valuable ship time. However, having a constantly evolving plan of action is rough on people and their routines. Plans tend to lose their certainty.

Of course, proposals are funded and years of work are banking on our executing a planned set of measurements. However, the decisions are difficult, if we planned to collect seven days of Surface Salinity Profiler data in rainy conditions and our planned operations turn out to be south of the actual rains for the previous two weeks, do we change our plans? Or, will Mother Nature bring rain to us in the coming weeks if we simply execute the plan with which we came to sea? The tarball gives us some weather projections, satellite rain rate and cloud maps, as well as current and salinity patterns in the ocean and model forecasts to help with the decision-making. Unfortunately what seems clear and useful to those at desks thousands of miles away, can be less than clear and ultimately confusing when working on an isolated patch of ocean far from regular observation. The effort to make good use and sense of the tarball is one of the additional challenges facing modern oceanography. 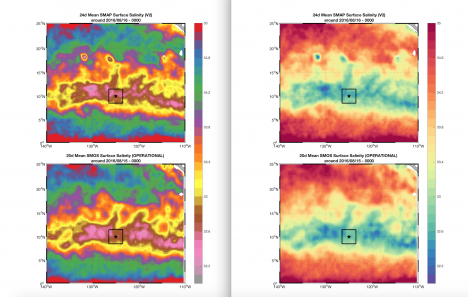 Two-panel plots of satellite salinity from the SMOS and SMAP missions. The only difference is the color scale; it is kind of a Rorschach test for oceanographers. Do you see fronts in one and not the other? Well, they are the same! What you see and interpret can be biased by how you present the information. That is another sticky mess in the tarball.

Before the tarball, seagoing oceangraphy was simpler (and more dangerous) and plans were simply to be executed. With the tarball, science is safer and more nimble and plans are malleable. I think that for us, older humans, the modern way with the tarball is more stressful. Or maybe, if you came of age with the Internet, life without the tarball is unimaginably silly and stupid. For a young oceanographer the science IS the sticky mess inside the tarball!

Whatever the reality, our information age has made a day at sea a challenge in environmental analysis. No more hoping, imagining, or guessing – it is all in the tarball if only you can figure it out!

This entry was posted on Thursday, September 8th, 2016 at 11:35 am and is filed under Salinity Processes in the Upper Ocean Regional Study (SPURS). You can follow any responses to this entry through the RSS 2.0 feed. Both comments and pings are currently closed.

2 Responses to “The Sticky Mess in the Tarball”