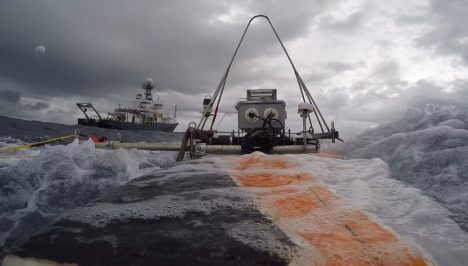 The R/V Revelle and the Lighter-Than-Air InfraRed System (on the left corner), as seen from the Surface Salinity Profiler. Credit: Dan Clark.

Kyla Drushka from University of Washington Applied Physics Laboratory (APL) received a National Science Foundation grant to participate in SPURS-2. It is one cornerstone of our work and is entitled “Rain-Formed Fresh Lenses in SPURS-2.” The idea of rainfall resulting in freshwater puddles or lenses at the sea surface is (perhaps) easy to imagine but is very tricky to observe and study in the real world. SPURS-2 will provide a wealth of new data on this subject with which to test the fidelity of our scientific imagination. 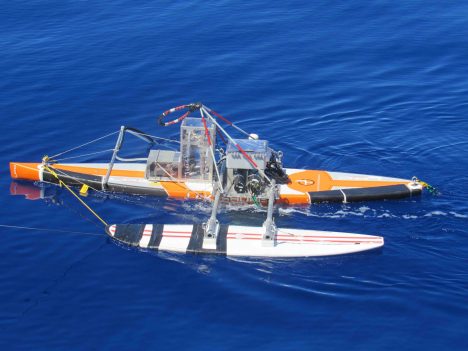 A beauty shot of the Surface Salinity Profiler.

Kyla and the APL crew have a variety of instruments aboard R/V Revelle but the Surface Salinity Profiler (SSP) is central to SPURS-2 science objectives. When you want to know the fate of rainwater after it hits the sea surface, measuring salinity (or equivalently the amount of freshwater) in the upper meter of the ocean is crucial. The profile of salinity in that top meter of the ocean is elusive for a number of reasons – technical and logistical. Technically, salinity sensors require some time and bubble-free water flow to make the measurement. However, normally the sea surface is rapidly moving up and down (because of waves!) so a sensor is not always in the water and away from bubbles until it is several meters below the surface. Finding a way to tow salinity (and other) sensors at fixed, shallow depths following the motions of the sea is another approach. APL scientists and engineers including Andy Jessup, Bill Asher, and Dan Clark designed the SSP to apply this approach. 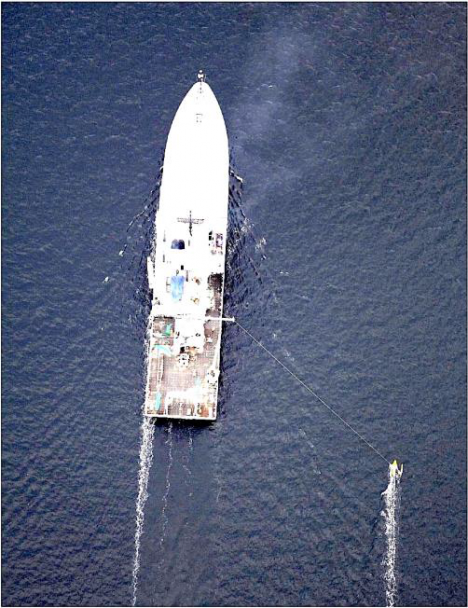 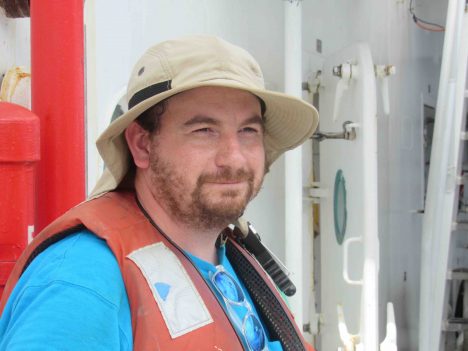 The SSP platform is a converted paddleboard with a keel and surfboard outrigger. It is tethered to the ship so it skims the sea surface outside the wake or influence of the ship. Below the paddleboard, on the leading edge of the keel, are salinity (and temperature) sensors at depths of 10 centimeters (4 inches), 30 centimeters (1 foot), 50 centimeters (1.64 feet), and 100 centimeters (3.28 feet), microstructure sensors (to estimate turbulence), and cameras. The Salinity Snake (see my last blog entry) supplements the SSP by providing temperature and salinity in the upper few centimeters of the ocean. The SSP can be towed for many hours before the instrument batteries need refreshing.

Deployment of SSP is most informative when there is a rain event, leading to stratification of the near-surface ocean with less dense fresher water on top of denser saltier water. If there is a rain event ahead of the ship, the SSP goes in the water. Then it can measure how the ocean changes over the periods from before rain, during rain, and recovering from rain. Salinity from several depths and simultaneous turbulence estimates are then used to determine how rainwater mixes into the ocean. 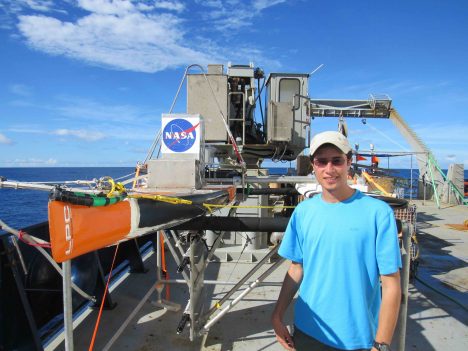 Suneil Iyer is a new graduate student at University of Washington who will work with Kyla on interpretation of the microstructure measurements from the SSP data. He just arrived in Seattle from his hometown of Kansas City, Kansas, one week before the R/V Revelle departure from Honolulu. He just had time to find an apartment before jumping on a plane for SPURS-2. Graduate school in oceanography can be a blast of new experiences! This is not his first exposure to physical oceanography: Suneil worked on tides in estuaries during his undergraduate work at University of South Carolina.

Kyla Drushka joined UW in 2014 after PhD work at Scripps Institution of Oceanography. She is now an active member of NASA’s Ocean Salinity Science Team and the mission science team for the Surface Water Ocean Topography satellite that is planned for launch in April 2021.

This blog entry goes to press near an auspicious moment on R/V Revelle SPURS-2 voyage. Saturday at 2 am (local time) is the halfway point of our expedition! In our oceanography lexicon we would call this the “hump day” for our voyage. For all you land-loving 5-day-a-weekers hump day might mean Wednesday. For the 24/7 work at sea, we really have only a “hump moment” to mark the halfway point of a continuous work schedule. Like any good NASA activity, people aboard have countdowns running to both our hump moment and our arrival back in Honolulu (8 am on Sept. 23). Amusement is in short supply!

This entry was posted on Friday, September 2nd, 2016 at 11:58 am and is filed under Salinity Processes in the Upper Ocean Regional Study (SPURS). You can follow any responses to this entry through the RSS 2.0 feed. Both comments and pings are currently closed.