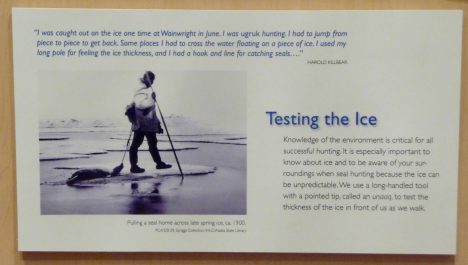 A sign at the the Inupiat Heritage Center in Barrow, AK.

Jun. 1, 2016 — We started our last day of the camp with a morning visit to the Inupiat Heritage Center to learn more about the indigenous local culture. Many of the Inupiat in Barrow still live their traditional subsistence lifestyle – hunting, trapping, and fishing for food. They do however take advantage of modern technology to make their way of life a bit easier and safer. For example, now machines have replaced dogsleds and rifles have replaced harpoons. But for some things, the old ways did not need to be modernized: the sealskin umiaq kayaks are lighter (easier to carry across the ice) and more navigable in the narrow leads of open water common to the area than anything manufactured today. And the fur-lined coats, pants, and boots are lighter, warmer, and repel moisture better than any modern outdoor gear. 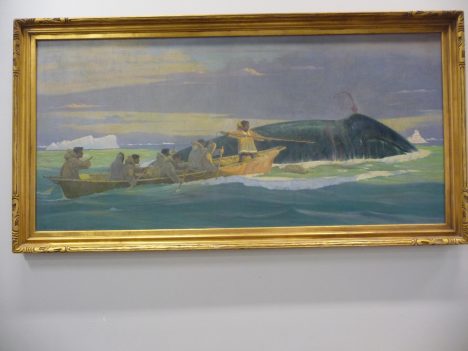 A painting of whale hunting at the Inupiat Heritage Center.

The Inupiat way of life is governed by the seasons. There is a season for whale hunting, for seal hunting, for polar bear hunting. The dark, cold winter season is a time to stay indoors and sew new clothes or repair old clothes. Festivals mark the seasons where the community comes together to celebrate and reinforce the bonds between families.

After visiting the heritage center, we headed back to our base for a final meal. Several times during the week, our field leader, Don Perovich, said that the key for a successful field expedition is “to eat as much as you can as often as you can.” And we were certainly well fed throughout, with plentiful sandwiches, instant soups, chips and crackers, and all-important chocolate for our typical mid-day meals. But our final meal in Barrow was a step above, thanks to Elizabeth Hunke at Los Alamos National Laboratory. She proved herself not only a top-notch sea ice modeler but also a great chef, putting together a delicious meal of spaghetti, garlic bread, and salad. 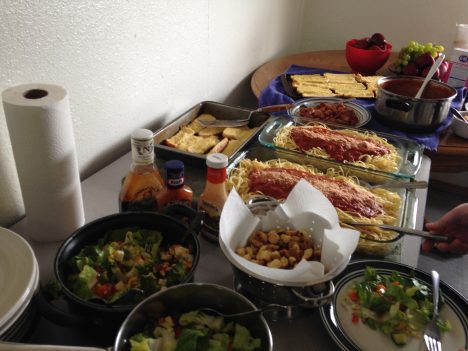 Then it was time for our final sessions, presenting the data we collected and discussing our Grand Challenge efforts. Unfortunately, the data collection the previous day did not go as smoothly as we had hoped. We couldn’t collect albedo measurements because the instrument didn’t work yesterday. But this type of things is not at all unusual in field work. As Don said: “In Arctic field research, it’s important to make a plan; it’s also important to not become too enamored of that plan” because something inevitably will go awry and you have be prepared to adapt.

So we couldn’t directly compare one of the key surface features between the two sites. However, we had other data we could look at. The new site to the north was 10-20 centimeters (4-8 inches) thicker than the original southern site. So there was less melt there and the ice was likely to last longer there. And while we lacked some data, we had models we could use. Many people think of modeling simply as predicting the future – and indeed models are used for that purpose (e.g., weather forecasts), but models, particularly climate ones, are also used to investigate processes and learn how climate responds to different parameters. Though we didn’t have albedo data, we could adjust albedo in the model and see how that affected how the modeled sea ice evolves in the future. 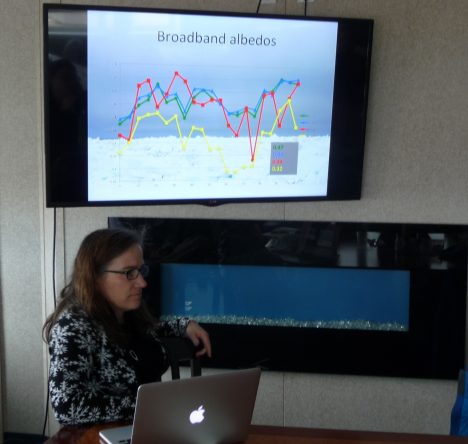 Several folks worked late into the previous night to process data and run the sea ice model. We obtained climatological weather data, input the data into the model and run it for the first two weeks in June. The results showed that the melt was strongly affected by the albedo of the surface and the amount of incoming sunlight, and that there will likely be substantial differences between the two sites. In a sense this isn’t terribly surprising, but to see such variation over such a small distance (the two sites were separated by only a couple miles) and within such short time periods (two weeks) is sobering. Large-scale complex models and satellite data cannot (yet) resolve such variability. There is still much research to do, and those of us at the camp have come away a greater appreciation for the challenge.

We finished up by discussing future plans. The goal of this camp wasn’t simply to get everyone together for one week, but to start new collaborations between modelers, satellite folks, and field researchers. We discussed several ideas to build upon the start we’ve made, keep momentum going, and convey what we learned to the broader sea ice research community. With that, it was time to head to the airport and begin our long journeys home.

Another tradition Don has is to bring a lollipop to each field expedition. When the expedition is done, he pulls it out as a reward for a job well done. At the beginning of our camp, he gave each of us a lollipop. It was up to us to decide when we were done. Some pulled theirs out after we wrapped up the meeting; some enjoyed theirs at the airport. I waited until the plane left the ground.

And so my adventure on the ice has come to an end. I can’t say I’m an expert in the field or ever will be. But it has been a rewarding week for me. I’ve gained a lot of knowledge about what it takes to do field work. I’ve gained an even greater appreciation of the value of field observations, as well as modeling studies. Hopefully I was able to give participants a greater understanding of satellite data. And finally, now when someone asks me if I’ve been on the sea ice, I can say “Indeed I have!” I still have the taste of the lollipop in my mouth to prove it. 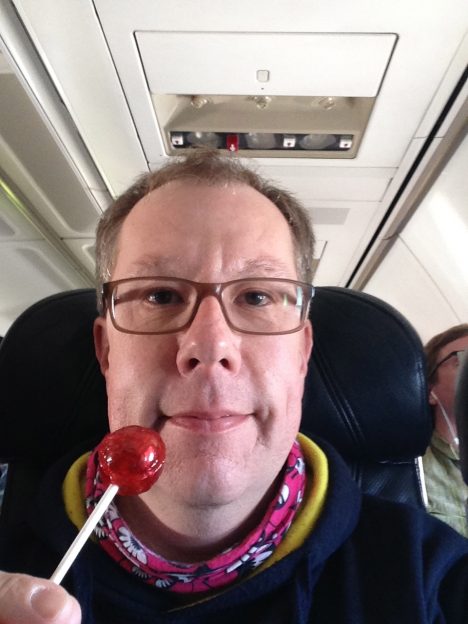 Until the next time, Walt.

This entry was posted on Friday, June 3rd, 2016 at 11:11 am and is filed under A Satellite Scientist Visits the Ice, Alaska 2016. You can follow any responses to this entry through the RSS 2.0 feed. Both comments and pings are currently closed.