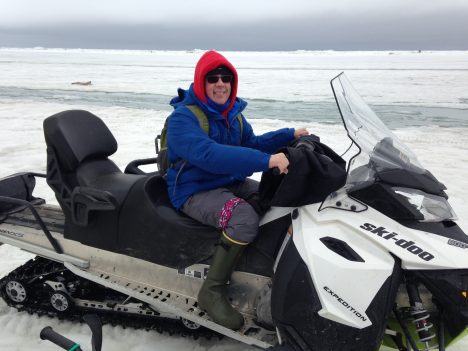 Walt Meier on a snowmobile.

May 27, afternoon – After our morning orientation and introduction sessions, I headed out onto the ice for the first time. We were split into four teams; each team will rotate through a different activity every day with each activity being led by one or two experts that will serve as our guide. I was assigned to the Red Team. Our activity for the day was sea ice morphology, or studying the forms of sea ice, and it was led by Chris Polashenski at the U.S. Army Cold Regions Research and Engineering Lab and Andy Mahoney at the University of Alaska, Fairbanks. All the other activities were being conducted within a short walk of the beach, but in order to see different types of ice, we needed to roam farther. This meant using snowmobile. After getting comfortable on the machines, we headed out. Our first stop was on a first-year ice floe, or is ice that has grown since the previous summer. This type of ice is generally thinner than multi-year ice (ice that has survived at least one summer melt season) and its thickness is largely controlled by the air temperature during the winter (though how much snow falls is important too). Colder temperatures mean more ice growth and thicker ice at the end of winter. We measured the thickness by drilling a hole through the ice using an auger. Then we dropped down a measuring tape. The tape has a folding metal bar at the end that catches the ice at the bottom of the hole; the tape is pulled taut and the thickness is read off the tape. 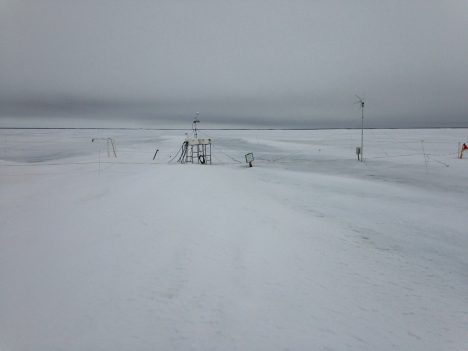 According to Chris and Andy, first-year ice in the area normally should be about 1.5 meters (5 feet) thick. We measured only 0.75 m. That means it’s been a very warm winter around here. But that is nothing new; in recent years, warm winters have become the norm as indicated by thickness measurements. For the past several years, Andy has been installing a sea ice mass balance station on the ice, automatically taking thickness readings every 15 minutes through the winter. The data is available online here. 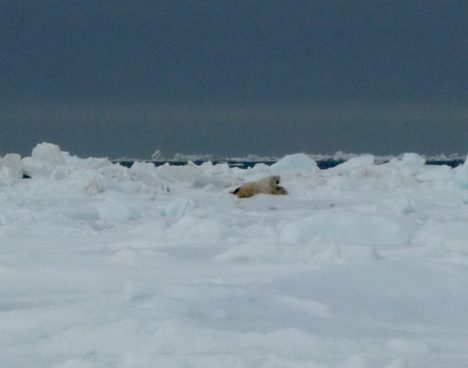 A polar bear in the distance.

Next we head further north, past Point Barrow, the northernmost land in the U.S., toward the fast ice edge. On the way, we spotted two polar bears in the distance. Polar bears are not an uncommon sight. They usually hang out near the ice edge hunting seals, though they sometimes wander into town, which can be a problem. At this time of year they are attracted by the whale carcasses that the native populations pull onto the ice as part of their traditional whale hunts. The bears were distant and barely visible, but it was quite exciting to see a bear. Polar bears can be dangerous and during all of our activities on the ice, we will have a polar bear spotter –a trained local resident carrying a shotgun – with us at all times.

We left the polar bears to their business and rode further out to a multi-year ice floe that was more than 5 meters (16.4 feet) thick. We attempted to measure the thickness, but we didn’t break through the bottom of the ice at our auger’s (boring tool) maximum 5-meter length. To my untrained eye, the multiyear ice didn’t really look much different than first year. But with careful viewing, one could see an elevation change compared to the first-year ice. It wasn’t a lot, but a just little more elevation on the surface that floats above the ocean translates into much thicker ice because roughly 90 percent of the ice thickness lies beneath the surface of the waters. So a 5-meter thick floe of sea ice rises only about 50 cm (20 inches) above the waterline. The most distinguishing characteristic, at least at this time of year, are the brilliant blue melt ponds that form on the surface. As the snow melts, the melt water will accumulate in depressions in the ice, pooling into ponds. The crystal clear water on top of the pure multi-year ice produces a distinctive turquoise color reminiscent of the water around a tropical island. Melt ponds are very important because they absorb much more solar energy than the surrounding ice, which accelerates the melting process. But to be honest, when seeing a pond in person, the first thought one has is how pretty they are. 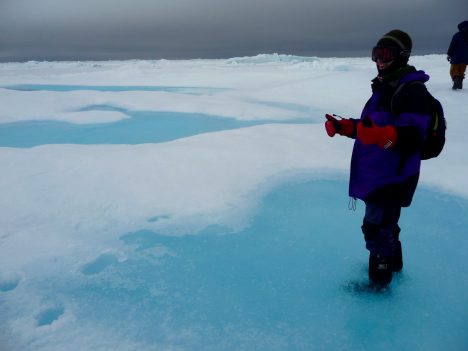 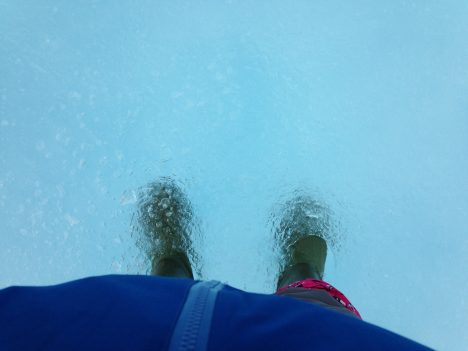 Walt, standing on a melt pond.

Just a few meters away, back on first-year ice, was another melt pond. But this had a much darker color due to the thinner and flatter ice. The water was also somewhat salty because first-year ice still retains some salt. The salt gets flushed out of the multiyear ice, so the blue ponds on the multiyear ice are fresh water suitable for drinking. We tried some and it was quite refreshing – ice cold! 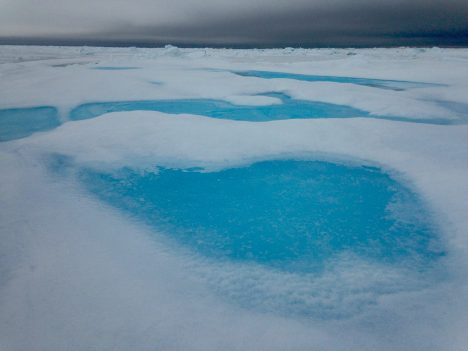 Next, we headed over to a large piece of ridged ice. Ice ridges form due to ice floes being piled into each other due to winds or waves. The fast ice does not move, but the drifting ice beyond does and when the winds blow toward the land, the drifting ice collides with the fast ice, forming mountains of ice. The one we investigated was around 5 meters (16.4 feet) high. This means the ice could extend 50 meters (164 feet) deep below the surface. However, the water is fairly shallow off the coast and in reality, the ridge was likely grounded to the sea floor. These grounded ridges actually stabilize the fast ice by acting like big support columns, holding the fast ice in place. This explains why the coastal ice remains in place long after the drifting ice has retreated.

The morphology activity was quite humbling to us satellite data scientists and modelers. We work at scales of 5 to 50 kilometers (3 to 31 mi) – i.e., we’re observing or modeling sea ice in 5-50 km aggregates. Here over just a few kilometers we saw a tremendously varied icescape. Even over just a few meters, we saw multiyear ice, first-year ice with melt ponds on each. How can interpret our satellite data to account for such variability and how can we simulate it the models?

With the ridged ice, we completed our tour of the various forms of ice found in the Barrow area at this time of year. We hopped on our snow machines for the ride home. In front of us the sun broke through the clouds, behind us the polar bears roamed, and all around us, a lovely landscape of ice.

This entry was posted on Tuesday, May 31st, 2016 at 10:51 am and is filed under A Satellite Scientist Visits the Ice, Alaska 2016. You can follow any responses to this entry through the RSS 2.0 feed. Both comments and pings are currently closed.