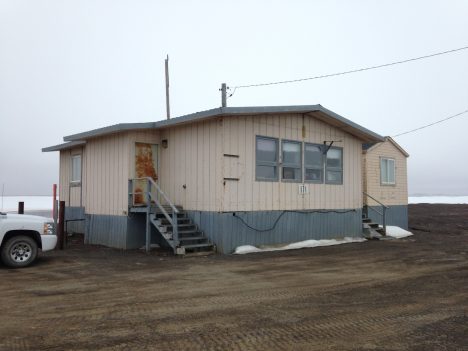 I have arrived in Barrow, Alaska. It was an interesting flight up from Anchorage: the plane had seats only in the back half of the plane because the front half is used for cargo. That is because there are no roads into Barrow, so supplies need to be brought in by plane or, during the short summers, by barge. After a stopover in Prudhoe Bay, we arrived to gloomy skies, which are quite typical for this time of year. Temperatures are right around freezing. We are staying at the NARL, which originally was the Naval Arctic Research Laboratory. Various research groups and other activities –even a college– now share this facility.

The accommodations are spare, but comfortable. Most people are staying in Quonset huts (prefabricated huts made of galvanized steel), but I’m with four others in “The House”, which is more like, well, a house. We have a living room, kitchen, full bath, and four bedrooms. Because we have a kitchen, we are the base for meals where the whole group meets up to eat breakfast and lunch. Last night we all gathered for a light meal after arriving and, with 24 people, it got pretty crowded. But it was nice to catch up with old friends and meet new colleagues. Already the collaborations have begun as we informally discussed each other’s research.

The whole campus is on a narrow spit of land north of town sticking out into the Beaufort Sea. I can see the sea ice from the house. So you might say we’re staying at a beachfront resort! With the ice right out the window, it was tempting to take a walk out there last night. However, we were told to not go out on the ice until we get a safety orientation. The ice off the coast is landfast ice – ice that is attached to the coast, so it doesn’t drift with the winds. However, it can still shift with the tides, as evidenced by piles of ice ridged formed as ice got pushed together. So one doesn’t want to just run out on the ice without being familiar with the hazards. Oh, and there are also potentially polar bears roaming around – another very good reason not to go roaming off by oneself. 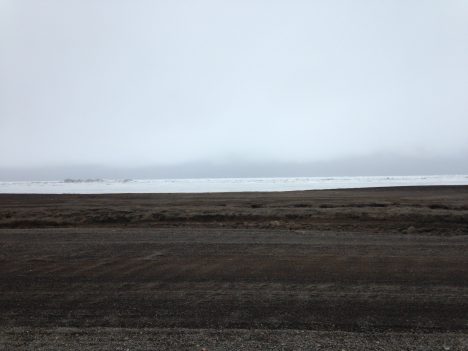 Our view of sea ice from The House.

Now we’re heading off to our orientation session and introductory discussions where we’ll start learning about modeling, satellite data, and field observations. This afternoon we’ll take our first trip out onto the ice. When the week is over, each of us will have broadened our expertise beyond each of our core research areas and hopefully we may find new areas of research to collaborate on and advance our understanding of sea ice.

This entry was posted on Friday, May 27th, 2016 at 2:45 pm and is filed under A Satellite Scientist Visits the Ice, Alaska 2016. You can follow any responses to this entry through the RSS 2.0 feed. Both comments and pings are currently closed.