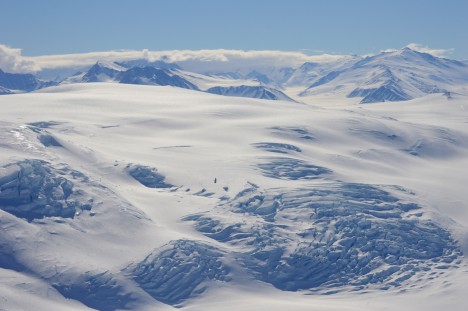 The big day had arrived. We were due to fly to our tiltmeters to collect the data that they had been gathering for two weeks. once this was the first time we had ever set these instruments up in the field, all fingers were crossed that we had been precise enough in initially leveling the meters so the data were in range and also that the solar panels hadn’t ended up covered in snow.

We had a spectacular flight, cutting over the end of Priestley Glacier and skirting helicopter-sized crevasses on the mountain behind our field site. Despite a bit of wind on the Nansen ice shelf, it was as calm on the Comein Glacier as it has always been for our visits. It’s such a peaceful, sheltered spot that I feel a holiday cottage wouldn’t be amiss. Perhaps too long of a commute for an average Friday afternoon, however. 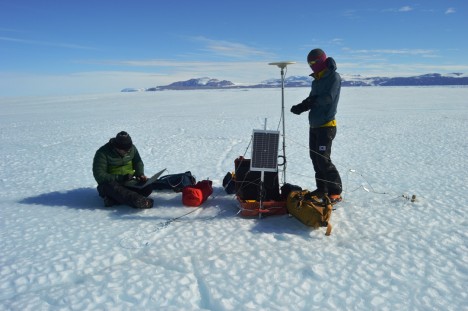 One of the tiltmeters (which are in black boxes) had become exposed and, because black materials absorb heat whereas white materials reflect it, had caused a bit of local melt which had trickled down the side of the box and refrozen. The upshot of this was that the entire box, battery, and straps were encased in some pretty solid ice. Fun! Commence some delicate hacking with ice axes so that we didn’t snap the wires coming out of the box. Finally having reached the interior, we nervously extracted the SD card and Ryan pulled the data off onto the computer. Success! Some excellent (and exciting) looking data showing tidal cycles. Tiltmeter two was easier because it hadn’t caused local melt of the snow so we could quickly retrieve the data. Again, some very interesting outputs. We want to thank John Leeman, an engineer from Penn State, for building us some happily working tiltmeters. Of course having disturbed the tiltmeters I had to reset them back to full level, which required sitting for 10 minutes enjoying the view while very delicately adjusting the little leveling legs.

We had just enough time to collect data from one of the GPS closest to the tiltmeters. All looked well apart from our tethers, which had come loose because of melt on the surface. We had one bamboo tether and one metal peg. The metal had heated up and melted a groove in the ice as it was pulled along, whereas the bamboo had stayed where it was supposed to. We tightened the wire as much as possible but we would have to return to this site with some more bamboo later.

Dinner back at base was a happy affair, having achieved success for at least three of seven of our instruments. The chefs had even made some pizza for us, which was a nice treat. The only unfortunate aspect of the day was that I had forgotten that in areas with 24 hour sunshine and highly reflective snow surfaces it is essential to put sunscreen up your nose as well as on it. Burnt nostrils are not fun, but they’re worth it for some nice data.

This entry was posted on Monday, December 14th, 2015 at 12:58 pm and is filed under Nansen Ice Shelf, Antarctica 2015. You can follow any responses to this entry through the RSS 2.0 feed. Both comments and pings are currently closed.