Update: The R/V Endeavor returned from sea on Aug. 6, concluding the fieldwork component of the 2014 SABOR experiment.

As mentioned in the previous blog (“A Vast Ocean Teeming with Life”) ending this cruise is not an easy thing to do. Especially if you experienced the majesty of the crystalline blue water in the open ocean as well as the magnificence of the wildlife surrounding it for the very first time. I am currently coursing my third year as a PhD student in the Electrical Engineering Department of The City College of New York (CCNY). I work as a research assistant for a small department in the Optical Remote Sensing Lab called Coastal and Oceanic waters group. We may look like a group of cool guys going out for fishing (as it seems on the left side of the picture), however, we are a team who works hand to hand together (depicted on the right side of the picture … why does the right side always seem right?)

“Cool guys” aka Coastal and Oceanic waters group, members of the ORS Lab at The City College of New York (CCNY). Courtesy of Lynne Butler

My research consists of using polarization properties developed as the light field propagates through the water body and use this information to characterize and retrieve water constituents and inherent optical properties (also called IOP’s) from polarimetric measurements. The basic idea is that as light propagates through the water it experiences significant attenuation due to absorption by water and suspended/dissolved matter as well as scattering by water and suspended particulates. These effects, both absorption and scattering, result in signal degradation of the radiance captured by sensors in our instruments. The additional information obtained when using polarization properties of underwater light propagation can provide a better understanding of this propagation and methods for improving image quality and increase underwater visibility … wait! (at this point you may be asking yourself).

So how can this have a real contribution to the goals and objectives pursuit by the SABOR (Ship-Aircraft Bio-Optical Research Campaign) cruise? Well, the answer could be very simple. The ocean is too big and in-situ measurements are too expensive to cover the entire water mass on Earth. Having this in mind, it is very clear that we need to adopt another cost-effective approach and that is the reason why we use satellite observations to account for many changes that take place in the ocean and coastal waters. Satellites provide very useful information when properly calibrated. As you may already know, sensors deteriorate over time and satellites go out of commission. However, polarization features are preserved even when the sensors may have experienced normal degradation and knowledge of this features can contribute in the development of future technologies to be used in satellites when more accurate and reliable information is to be acquired. Some living and manmade objects in water have partially polarized surfaces, whose properties can be advantageous in the context of target camouflage or, conversely, for easier detection. Such is the case for underwater polarimetric images taken to detect harmful algal blooms (red tides) or to assess the health of marine life and coral reefs which are of significant scientific and technical interest.

The main challenge faced by these images is that of improving (increasing) the visibility for ecosystems near and beyond the mesophotic depth zone. Data collected in the form of images, videos and radiance was acquired using a green-band full-Stokes polarimetric video camera and measurements of each Stokes vector components were collected as a function of the Sun’s azimuth angles. These measurements are then compared with satellite observations and model using a radiative transfer code for the atmosphere-ocean system combined with the simple imaging algorithm. The main purpose of this task is to validate satellite observations and develop algorithms that improve and correct these observations when needed.

But seriously… Are you playing video games? Courtesy of Lynne Butler and Ivona Cetinic

It always looks like I am playing video games but in order to have very accurate information it is advisable to position the instrument at a certain orientation with respect to the Sun’s azimuth angle. The instrument depicted here is called Polarimeter and as Robert Foster suggested in his blog it has a very boring name, so we are still in search of a cool code name after someone suggested (unsuccessfully, and I am glad for this) to call this instrument Carlos. A real issue came across when they were thinking to put Carlos in the water … an idea that I didn’t share. The polarimeter, let’s forget about Carlos for a moment, is a set of Hyperspectral Radiance sensors with polarizers oriented in the vertical, horizontal and 45° from a reference axis. This sensors can capture light coming from any point in the water body thanks to a combination of a step motor which can be programed to stop in any sequence of angles in the range of 0 – 360° (from vertically up to vertically down) and a pair of thrusters (or propellers) which can rotate in the azimuthal direction (both clockwise and counter-clockwise). This scenario allows for vitually a 3-D range of hyperspectral measurements. Pretty cool, huh? The set of bouys at each corner allows us to have a very stable system and prevent the instrument from going very deep down in the case that cables and safety line get cut.

When things go like they do in the left image, we always have to do the right thing. Courtesy of crew members and Ivona Cetinic

Very far from what most of us have probably experienced in a cruise or fishing trip, the ocean is not always calm. In our twenty plus days in the ship, we came across a system which was playing very rough against the R/V Endeavor. Fortunately for us, this cruise was under the supervision of very talented and experienced people. I am not talking only about the captain, but also his outstanding crew members, chief scientist and marine technician. Although we have some minor difficulties (… you should know by now that sea water and electronics will never be good friends) we fixed them as soon as the storm was gone. It is not that Robert and I are playing as firefighters rescuing a dispaired kitten from a tall tree.

I want to end my vision of this field campaign with a summary of the awesome marine wildlife that somehow approach to us to say hello, some species more shy than others, to this group of scientists which were part of NASA-SABOR. As depicted in the picture (left-to-right and top-to-bottom), one of the first appearences was that of a seagull. It doesn’t look that shy since it preferred posing for us on top of the Polarimetric Lidar (owned and operated by scientist from NRL). Very intelligent creature this particular one, the others were just swimming in the waters and preparing to be a snack for a hungry shark as depicted in the image in the top center. Another interesting character which showed up near the surface was previously mentioned by Matthew Brown from Oregon State University in the previous blog post and it was a species of blueish salp with very long tentacles. The next creature is a very friendly dolphin which pretended racing us so we could take very amazing pictures. Dolphins always so adorable, appearing in pods and jumping out of the water around the research vessel or just posing underwater in front of the polarimeter! The last living character was a very shy sperm whale. Always keeping the distance but letting us know it was present leaping out of the water at most 300 feet from the ship! 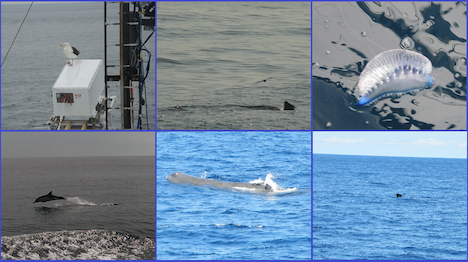 These past three weeks in the R/V Endeavor had been very amazing although intense. Waking up and knowing that you are far from home, your friends and family may sound questionable but understanding that you are in front of one the most wonderful and powerful sources of life is a priceless experience not all of us can witness. That is why I am writting this blog and I hope you have enjoyed reading all our blogs and could have a taste of what is like being in the sea for three weeks!

This entry was posted on Tuesday, August 19th, 2014 at 1:37 pm and is filed under Ship-Aircraft Bio-Optical Research (SABOR). You can follow any responses to this entry through the RSS 2.0 feed. Both comments and pings are currently closed.

One Response to “Video “Games” for Science”