ABoVE: Burned boreal forests — Come along to measure carbon

As part of our field work to measure carbon emissions in burned areas, we often have to hike through an obstacle course of fallen trees to reach our research sites. I took some video with a GoPro to give a sense of what this is like, as well as how we extract soil to take measurements and how we find the perfect sites.

Elizabeth Wiggins is a PhD student in the department of Earth System Science at the University of California, Irvine.

In the field, collecting the data is a big job – but our work starts long before we start taking measurements, with the task of finding desired sites within the landscape. 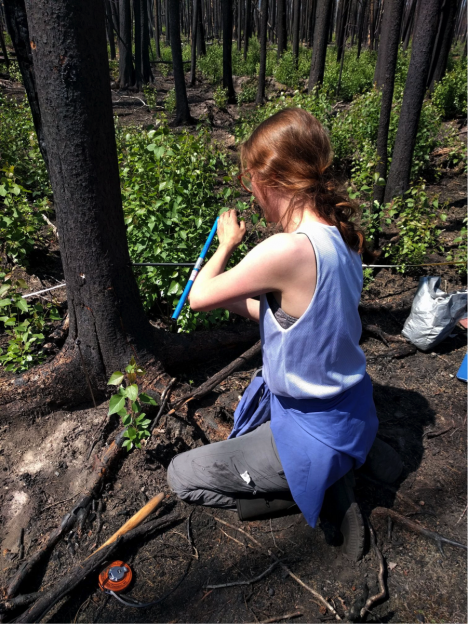 Jocelyne coring a tree to determine the age of the forest (Credit: Sander Veraverbeke)

As our time in Saskatchewan progresses, choosing and finding the right places to collect data becomes progressively more difficult. We are looking for a wide range of forest ages and species composition. This becomes more and more challenging as the time passes, since we now need to find sites with the particular characteristics that we are missing. To find these places, we look at maps that show when and where fires have occurred, and combine this information with maps from logging companies that show location and dates of timber projects.

Every day, we head out to several sites that we identified the night before. We usually drive an hour or so on gravel roads, and hike several hundred meters into the forest. We check for the right species composition at the site, and use a tool called a tree borer to extract a thin cylinder from a nearby tree trunk. From this tree core, we can count the number of rings and determine the approximate age of the forest. If the forest age and species composition meet our expectations, we finally begin our data collection. If not, we return to the car and attempt another location.

It can be challenging when we don’t find what we expected, which can result from inaccuracies in the map layers we use. At times this can be frustrating, but thanks to our team’s stamina, we always eventually manage to find what we need. With only a couple days left in the field, all the gaps in our data will soon be filled.

Jocelyne Laflamme is an undergraduate student in Wildlife Biology and Conservation at the University of Guelph in Canada.

Since our last post, our team has moved an hour south to the small village of Weyakwin, where the Philion fire burned last year. There is a lot of logging Weyakwin, and we are very interested in the interactions between fires and logging. We are comparing burned forests that grew back after people cut trees, to those that grew back after an earlier forest fire. 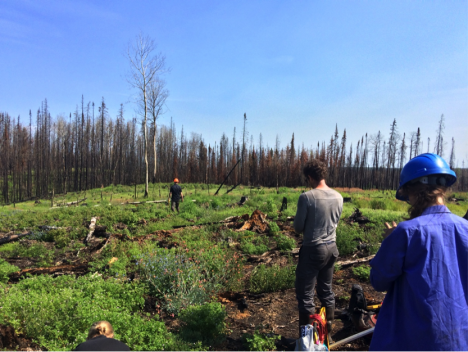 Sampling a young harvested site that burned last year. It was harvested only a year or two before it burned. (Credit: Solvik)

We believe there could be differences between the two in burn severity and the amount of carbon released by the fire. When a plot is harvested for lumber, the logs are removed but the soil remains. This is the opposite of burned areas, where fire burns into the soils but a lot of the trees remain standing, albeit charred. To study these differences, we are searching for areas of burn and harvest origin that are about the same age. We have seen some very young burned sites, many were less than 10 years old when they burned. This is surprising since forests in boreal regions typically burn when they are 50 to 100 years old. We were shocked to find a burned plot that had been harvested only a year or two earlier. Even without any significant trees or shrubs to carry the flames, the soil was able to sustain the fire.

At the sample sites, my job is to help characterize and quantify the aboveground biomass. This includes trees, shrubs, and dead trees that have fallen over, called “coarse woody debris.” I work with Brendan Rogers, our team leader, to measure every tree within a 2-by-30 meter sampling area. We identify the tree species, rate the amount of the canopy consumption, and measure the diameter. We will use these numbers to estimate how much carbon was released when that tree burned. Most of these tasks are fairly straightforward — although it can sometimes be tricky to differentiate between similar tree species after they have burned. We can measure individual trees pretty quickly, but it can still take one or even two hours to work through an entire site. At one site, we counted over 350 trees, measuring the diameter and estimating the canopy consumption for each and every one! 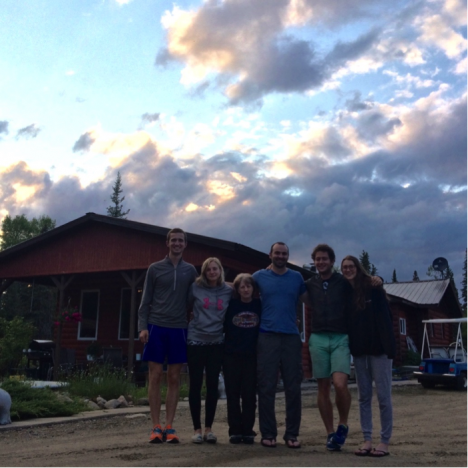 In Weyakwin, we are staying at a small bed & breakfast. Our host, a wonderful lady named Rita, takes great care of us. She cooks us breakfast and dinner, and she even packs us brown bag lunches for us to grab on our way out. After going out for dinner every night at our previous lodging in La Ronge, it has been a great change of pace eating home-cooked meals. We will be staying with Rita for the next week, and then we will be returning to Saskatoon to fly back to our respective homes. One of our team members, Catherine Dieleman, left early for her friend’s wedding. We will miss her and her soil expertise dearly.

But there are a lot more sites to sample before we are done!

One of the best parts of a field campaign are the ‘little moments’ that sneak in while you work. They can really make your day. On that front this field campaign has been no slouch. Yesterday for example, we saw a juvenile black bear while we were traveling to a new field site. We also enjoyed a great sunset over Lake La Ronge here in Saskatchewan, and had a beaver sighting later that evening. 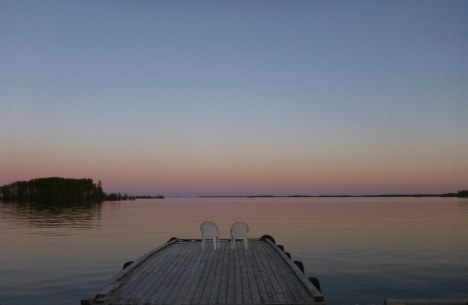 However, for me one of the best ‘little moments’ happened the day before… Our team is split into a number of different groups that measure different ecosystem characteristics: fire severity, tree density, species and age, as well as soil horizons and depth of burn in the soil. Liz Wiggins and myself work together to collect the soil measurements. As we measure and collect samples from every organic soil horizon, this task can take some time — often causing the soils group to finish up well after the rest of the team. Saturday though, everything came together for us soil diggers, and for the first time on this campaign our little group finished up first. We thought it was worth a victory photo. Sometimes it is the little things.

That Saturday was a particularly eventful day for the whole team. We had a great opportunity to participate in the filming of CBC’s The Nature of Things. Everyone was a pleasant combination of excited with a touch of nerves to be filmed, but generally thrilled to be sharing our science in this medium. The whole filming crew was wonderful, and eased us through the whole process. The sneak peek of the drone footage they shot seemed pretty promising to us, but we will all have to wait till 2017 to see the final footage. I guess some days in the field it is the big things too.

Catherine Dieleman is a post-doctoral researcher in Ecosystem Science at the University of Guelph in Ontario, Canada

The recent megafire around Fort McMurray drew worldwide attention. Not only did this fire devastate a community, the fire also grew exceptionally large and started very early in the fire season. Northern forests are rapidly changing, and fire plays a crucial role in this transition. 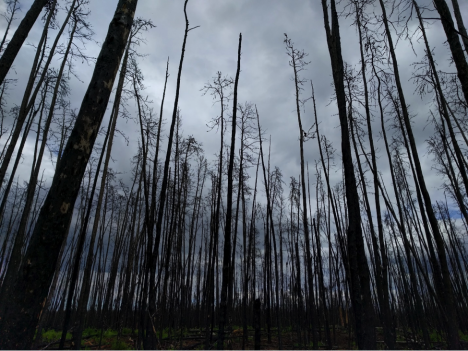 Fires in the boreal forest emit large amounts of carbon dioxide, the most important greenhouse gas. Exactly how much they emit is a difficult question to answer. Over many decades these forest have piled up thick layers of downed needles and other organic material, resulting in thick carbon-rich soils. When a fire spreads through the forest, the carbon it emits comes mostly from these soil layers, and not so much from the actual live trees.

The real question is: how deep do these fires burn into the soils? There is a lot a variability depending on which forest type is burning and how hot it burns. 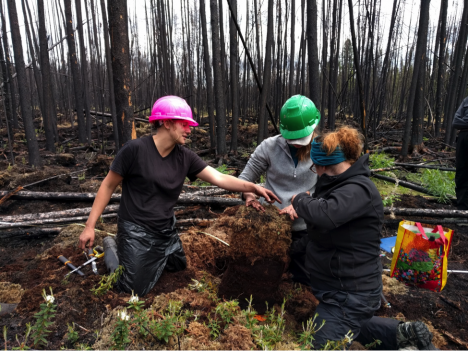 Some members of our team just excavated a deep organic soil. They will carefully measure this soil pie and cut out some samples for lab analysis. (Credit: Veraverbeke)

As part of the ABoVE field campaign, our field crew flew into Saskatoon, Saskatchewan on May 28th from Massachusetts, California, Ontario, and the Netherlands. We joined up with another field team from the University of Saskatchewan. After stocking up on supplies, we drove about four hours north to enter vast swaths of boreal forest.

Our goal in Saskatchewan is to quantify how much carbon fires emit in forest types that currently burn infrequently, but may become more sensitive to fire in the near future. For example, we are interested in reburns in forests that last burned only a couple of years ago, or burns in forests where people previously cut down trees. With all the changes that are underway it is important to understand how fires impact these forest types and how much carbon they emit. 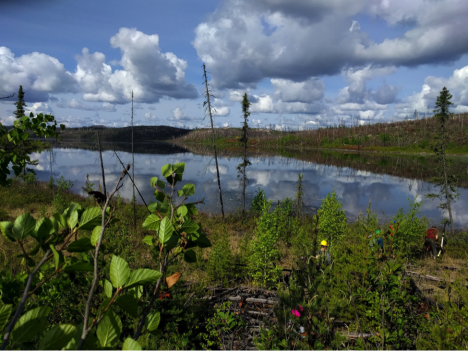 Our maneuvers in challenging terrain are rewarded by gorgeous vistas of landscapes that are untouched – except by fire. (Credit: Veraverbeke)

Since we arrived, we have been hitting up quite a few field plots. Getting to these field plots requires off-trail hiking in often-rough terrain, with soggy bogs and steep rocky hills. We have to scramble through piles of wood that fell down after the fire. Once we get to our desired site, we measure for several hours. We take samples of soils that will be analyzed in the lab and measure lots of trees (as many as several hundred). By doing so, we are able to assess the amount carbon of that was emitted by the fire.

We can link up our field measurements with data from NASA satellites to better characterize all fires within Canada and Alaska. During the day we get rewarded for our hard work with lunches-with-views, mosquitoes, and some thunderstorms that hopefully rain out somewhere far on the horizon…

Sander Veraverbeke is a project scientist at the University of California, Irvine, and an assistant professor in Remote Sensing at Vrije Universiteit in Amsterdam