A Vast Ocean Teeming with Life

Three weeks at sea is a long time for someone who has never been out of sight of shore. My greatest impression during my time out here is the one I first had when we first set out: the ocean is really, really big! I realize that probably sounds too obvious to be worth mentioning, but the sheer vastness of the ocean is hard to overstate. Standing on the deck, turning 360 degrees and seeing nothing but smooth, blue water as far as the horizon, it’s hard not to be struck by how empty it all appears. 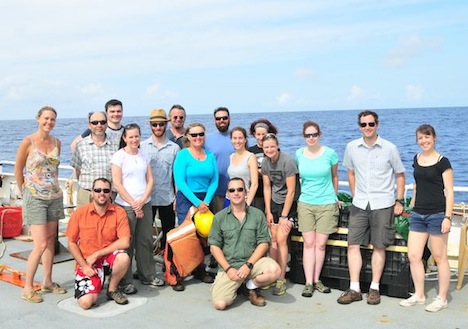 Of course, that’s not true at all. The ocean, far from being empty, is teeming with life. Most of it is too small for us to see with the naked eye, but it’s there all the same and it affects each and every one of us even if we’ve never been to the sea in our lives. Phytoplankton, the microscopic algae that live in the sunlit regions of the ocean, not only provide much of the oxygen we breath, they also play an important role in managing the earth’s climate through their roles in uptaking CO2 from the atmosphere and cycling nutrients like nitrogen and sulfur through the ecosystem.

A big part of what our group does is trying to understand how different aspects of the ocean environment (light, nutrients, grazing pressure) affect the ability of the phytoplankton to photosynthesize and grow. One way we do this is through a piece of equipment called a fluorometer, which can give us an indication of how efficiently algae are absorbing photons from the sun and turning their energy into carbon. It works by hitting them with a large amount of light, then measuring what percentage gets released back after getting absorbed. A simple enough technique in principle but one that can tell us all sorts of things, from the size of the molecular antennas the algae use to harvest light to the degree that electrons can be shared between different reaction centers in the chloroplast.

Another technique we use which is pretty cool (or rather, hot) is the use of radioactive isotope as tracers to measure carbon uptake. On the Endeavor that activity takes place in the Rad Van, which is named for radiation and not, unfortunately, for how radical it is. By allowing algae to photosynthesize in the presence of CO2 formed with the carbon isotope 14C, we are able to track how much the carbon is taken up under a variety of different conditions.

Well, three weeks have come and gone and we put into port tomorrow. It will be nice to be back on land, but I will miss the excitement of the ocean. Today, we got a going away surprise in the form of a pod of dolphins that came near our boat and splashed around for awhile. In addition, the water around the ship was filled with a species of salp, gelatinous creatures which kind of look like sea jellies, that was bioluminescent and gave off a brilliant blue light. It was almost like the ocean knew we were leaving and decided to give us a show to send us off.

This entry was posted on Thursday, August 14th, 2014 at 3:15 pm and is filed under Ship-Aircraft Bio-Optical Research (SABOR). You can follow any responses to this entry through the RSS 2.0 feed. Both comments and pings are currently closed.

One Response to “A Vast Ocean Teeming with Life”