Here we are ending the 4th full day aboard the R/V Endeavor, and I can hardly believe it! Time really does fly when you’re having fun! Amid the rush of running cables, installing sensors, learning new and exciting science and making new friends, I couldn’t be happier. I am a 3rd year Ph.D student in the Electrical Engineering department of The City College of New York, and through extremely fortunate circumstance I found myself working in the Optical Remote Sensing Lab of NOAA-CREST.

Life aboard the R/V Endeavor is both exhilarating and exhausting! During our safety briefing I jumped into an immersion “Gumby” suit for the first time, giving my colleagues a good laugh as I tried to close the face flap with my lobster claw gloves. 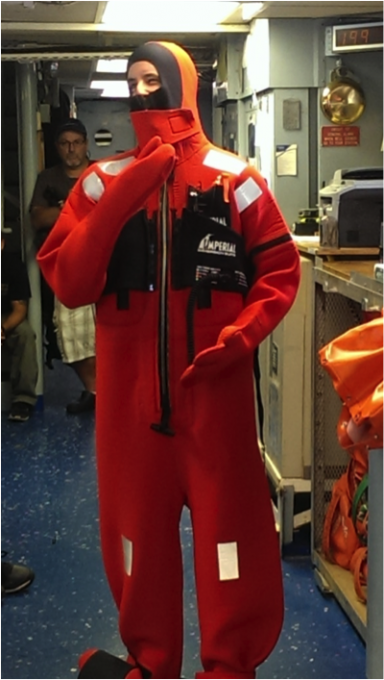 I’m trying on the immersion suit for the first time and posing “mannequin-style” for the safety briefing Friday morning. Photo courtesy of Ivona Cetinic, University of Maine

Although we’re currently 18 miles off the shore of New Hampshire, we’ve already had several visitors!

On Saturday morning we spotted a pod of whales in the distance. They were too far away to photograph, but we could clearly make out their sprays and tailfins when they dove.

And the dolphins! This was the best part. Just a couple hours after leaving port on Friday the entire science team was on deck learning how to deploy the CTD when a pod of dolphins started leaping out of the water not 20 feet from the ship! It was almost as if they wanted to see us off on our journey! We managed to snap some really fantastic photos. 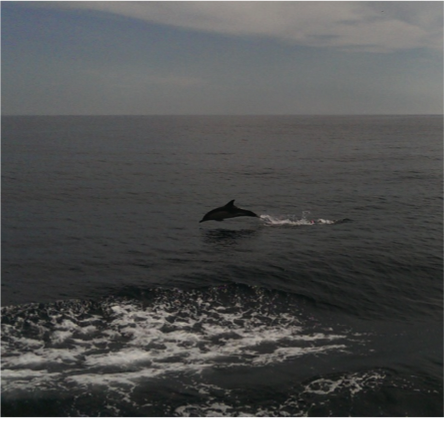 Dolphins jumping out of the water to see us off! Photo courtesy of Ivona Cetinic, University of Maine

Slightly more numerous than dolphins are the tiny phytoplankton which provide us with so much of the oxygen we breathe. Inside Endeavor’s main lab is an amazing instrument that can actually take pictures of these microscopic creatures and count them! Since one of SABOR’s primary science goals is to quantify how much carbon is being converted into oxygen by marine life, it is vital that we know exactly what species are present and in what concentrations.

Of course it’s impossible for the R/V Endeavor to be everywhere at once, so we must rely heavily on satellite observations. Current sensors such as MODIS (Moderate-Resolution Imaging Spectroradiometer) aboard the Aqua satellite and VIIRS (Visible-Infrared Imaging Radiometer Suite) aboard the Suomi NPP platform are designed to observe the ocean and atmosphere. Although they do it quite well in a general sense, there is still too much uncertainty to make absolute assessments of climate change and carbon cycling.

When we as humans look at an object, what is it that we’re actually seeing? (No, it’s not a philosophical question!) We see color and brightness. Seems sufficient, doesn’t it? But it turns out that there is actually another hidden property of light that we can’t see with our eyes, and it’s called polarization.

So if we can’t see the polarization of light, why do we care about it? Why is it a major focus of SABOR? The answer is because it’s becoming more and more difficult to increase the accuracy of satellite measurements using color and brightness alone. By incorporating polarization into our measurements, we are opening up a whole new dimension of information that was previously inaccessible. Our laboratory at the City College of New York is studying the way light becomes polarized in various conditions both above and below the surface of the ocean.

The first of the two instruments that we designed at City College is called HyperSAS-Pol. It is designed to automatically look at a fixed angle relative to the sun, regardless of the direction the ship is facing. HyperSAS-Pol measures both the polarization of sky light, and also light coming from the ocean. 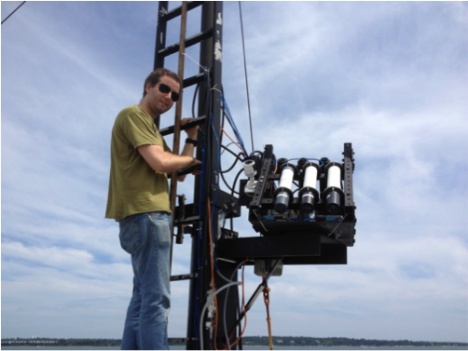 I’m setting up HyperSAS-Pol on the bow tower of the R/V Endeavor. Photo courtesy of Alex Gilerson, City College of New York

Our second instrument floats on the surface of the ocean and measures the polarization of light underwater. We can rotate the instrument by using propellers that are attached to its arms. The sensors themselves are attached to a stepper motor which can look up or down in the water. With these two motions we can measure polarized light in any direction. By the way, this instrument doesn’t have an awesome code name like HyperSAS. We just call it the polarimeter… pretty boring name, I know. Maybe you can think of a better one? Post a comment! 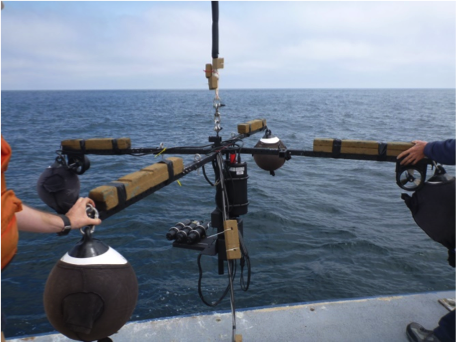 While we are taking measurements on the R/V Endeavor, a plane will be crossing our path several times with a sensor capable of measuring polarization, as well as a LIDAR. During their test flight on Sunday afternoon we were able to watch the plane corkscrew down from the clouds to circle the ship! Too cool. They even took a picture of us! 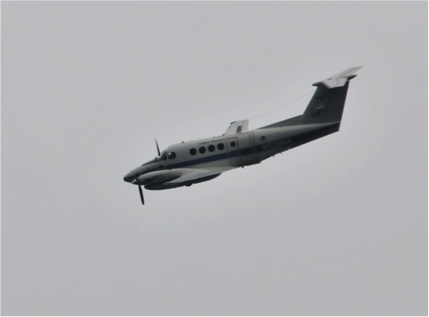 Between the combined efforts of everyone onboard the R/V Endeavor and in the sky, we will be able to trace the complete path of polarized light coming from the sun, down through the atmosphere, into the water, interacting with all the little sea critters and finally emerging back into space to be captured by one of NASA’s Earth Observing satellites. If successful, our work here will be instrumental in the design of next generation satellites, such as the PACE mission.

We have one final visitor who is here in spirit, and his scientific value is without doubt. He makes sure that no light gets reflected off the white buoys and contaminates our underwater sensors. He is a childhood friend of mine, but I’m sure that you’ve met him before too! 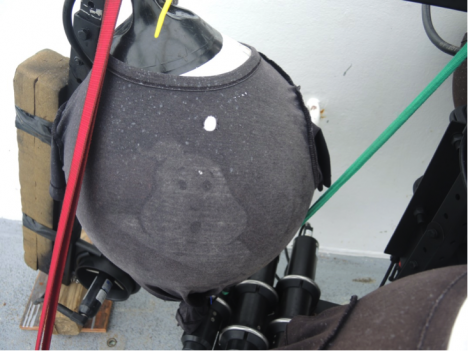 This entry was posted on Tuesday, July 22nd, 2014 at 2:30 pm and is filed under Ship-Aircraft Bio-Optical Research (SABOR). You can follow any responses to this entry through the RSS 2.0 feed. Both comments and pings are currently closed.