April 1, 2013 — I was tossing and turning this morning between 5 and 6:30 am, anticipating our 8:15 am scheduled take-off. Our gear was packed and we were ready to go. I rolled out of bed at 6:30, looked out the window and realized our luck had run out: I couldn’t see any of the beautiful peaks surrounding Kulusuk and snow was lightly falling. The pilots called our hotel at 8 am and told us the flight was delayed and they would reassess at 11 am when the next weather forecast would arrive. Eleven o’clock came and the weather had not changed, so our on-time put-in was canceled. Not only that, but we were told tomorrow was not an option either: due to the Easter holidays, tomorrow’s helicopter schedule is full transferring supplies to the smaller villages. It is typical to have delays, so we were not too disheartened. However, it was bit frustrating when all the clouds burned off around 2 pm and we had a beautiful blue-sky afternoon. It was too bad we couldn’t fly today. We all made the best of the situation and went out for a hike to enjoy the nice weather and some free time before the field work begins.

Our team in front of the helicopter.

Here’s what really happened: Yesterday we were told there was no chance we could fly today. Imagine our surprise when at 10 am the helicopter pilots called the hotel and said they would give us one of our three put-in flights at 11:20 am.  We already have the gear for the three flights at the airport and had a put in plan just in case we had to split the fights, so we jumped into action.  Rick, Clem and Ludo would be in the first helicopter load with emergency gear, gear to set up camp, food and the radar gear to do the initial survey to find the top of the water layer we are going to drill into.  Rick, Clem and Ludo packed the last remaining items in their rooms, I filled water bottles and Jay got the hotel truck ready to haul us to the airport. (As I mentioned before, they are nice enough to let us use their truck.) Once at the airport we weighed our items and put them on the luggage carts. The helicopter arrived and was literally packed full of gear. Our first load is light at around 800 kg (we can have up to 950 kg including passengers), but it is bulky with all the tents and food. The helicopter pilot confirmed our location, asked about the conditions of the site from 2 years ago, when Clem was last there, gave a quick safety briefing and took off just after 11:45. 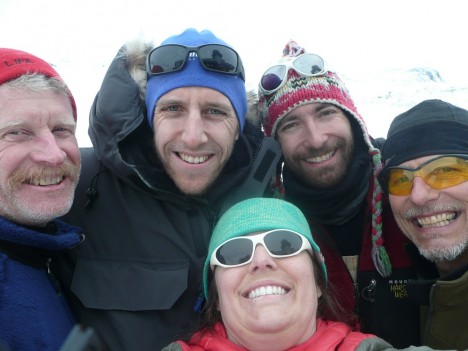 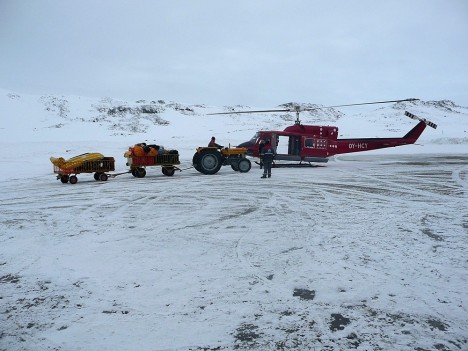 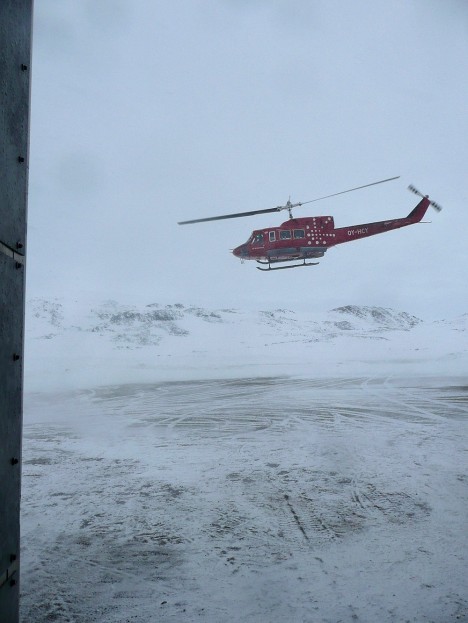 The helicopter takes off, taking Ludo, Rick and Clem to the field.

Now our team is split. Rick, Ludo and Clem will establish camp and complete the radar survey. Jay and I are still waiting in Kulusuk that camp is set up and all is well. The next check is at 4 pm (as a safety precaution, we always have check-in times). Tomorrow at noon we will start the last two put-in flights to bring the drills, the rest of the science equipment, Jay and I. Today’s was an eventful morning, but the fieldwork has officially started. The weather report is good for tomorrow and Jay and I are ready to go — we can even go early if the pilots decide to give us a call at breakfast.

If we get into the field tomorrow, we will transmit brief updates using our satellite phone to keep the blog updated.  Then, when we get back from the field, if the Internet here is fixed,we can start sending more of our spectacular photos.

This entry was posted on Wednesday, April 3rd, 2013 at 12:24 pm and is filed under Greenland Aquifer Expedition. You can follow any responses to this entry through the RSS 2.0 feed. Both comments and pings are currently closed.