An Oceanographer And The Water Cycle

SPURS Chief Scientist Ray Schmitt has been thinking about the salt in the ocean for a long time. He did his PhD thesis on an unusual form of mixing called “salt fingers,” which we will discuss in a later post. This small scale mixing process led him to consider the origins of the ocean salinity contrasts that we see around the world.

It’s fairly obvious that salty waters arise from high evaporation regions and fresher waters originate from high rainfall areas or river flows into the ocean. But it turns out that accurate estimates of evaporation and rainfall over the ocean were hard to come by. For a long time, it was a relatively neglected research topic. Many meteorologists were only concerned about how much it rained on land and few seemed to care if it rained on the ocean. Pulling together the best data he could, Ray found that, in fact, the ocean completely dominated the global water cycle. The terrestrial part, so important to us on a daily basis, is a much smaller piece. The oceans hold 97 percent of the Earths free water, the atmosphere only 0.001 percent. The oceans provide 86 percent of global evaporation and receive 78 percent of all rainfall. The total of all river flows into the ocean sums to less than 10 percent of global ocean evaporation. Clearly, if one wants to find out what the water cycle is doing, one should be looking at the oceans. The traditional fixation on the terrestrial water cycle is understandable, but risks missing the big picture. It seems that the tail is wagging the dog in terms of research on the global water cycle! 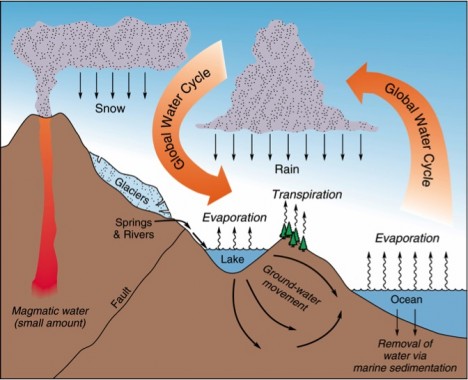 A traditional view of the water cycle.

The oceanographers’ view of the water cycle.

Of course, one of the most important questions for climate change is what the water cycle will do with continued warming. Basic physics tells us that a warmer atmosphere will hold more water vapor, so an intensified water cycle is expected. Oceanographers should be able to assess any trend in the water cycle if we do a good job in monitoring ocean salinity. On land, man has altered every watershed with dams, groundwater irrigation, deforestation and human consumption. But the ocean’s mostly unaltered and its salinity field provides insight into the vast majority of the pristine natural water cycle. The ocean has its own rain gauge in the form of salinity, and our task in SPURS is to learn how to read it.

The combination of the global coverage from Aquarius for surface salinity, detailed process studies in the ocean like SPURS, and sophisticated high-resolution computer models working in concert open up the oceanic water cycle to careful scientific examination. 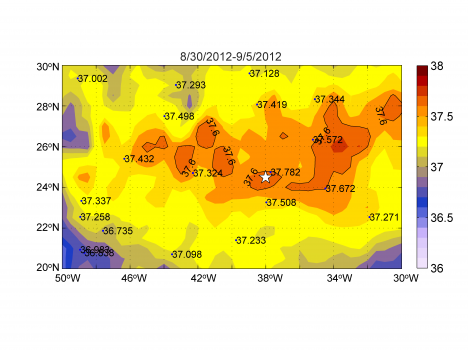 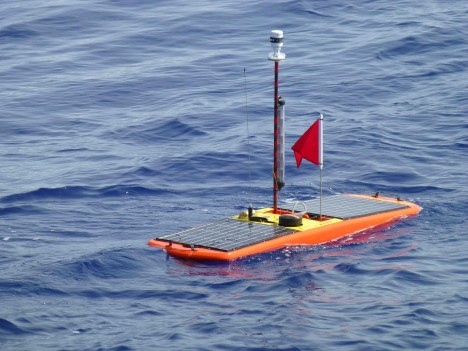 We are beginning to deploy the array of instruments on the ship and they are starting their year-long mission to examine the ocean salinity variations. Our challenge is to understand the detailed picture of salinity that will be painted by the various sensors and to make sense of this in the larger picture of the global water cycle.

This entry was posted on Wednesday, September 19th, 2012 at 1:43 pm and is filed under Salinity Processes in the Upper Ocean Regional Study (SPURS). You can follow any responses to this entry through the RSS 2.0 feed. Both comments and pings are currently closed.

3 Responses to “An Oceanographer And The Water Cycle”