Heading South, to New Zealand and Beyond

Soon, we’ll report back from even further south. We’re headed to the heart of the Antarctic ice sheet, to collect measurements on the ground for the ICESat-2 mission. 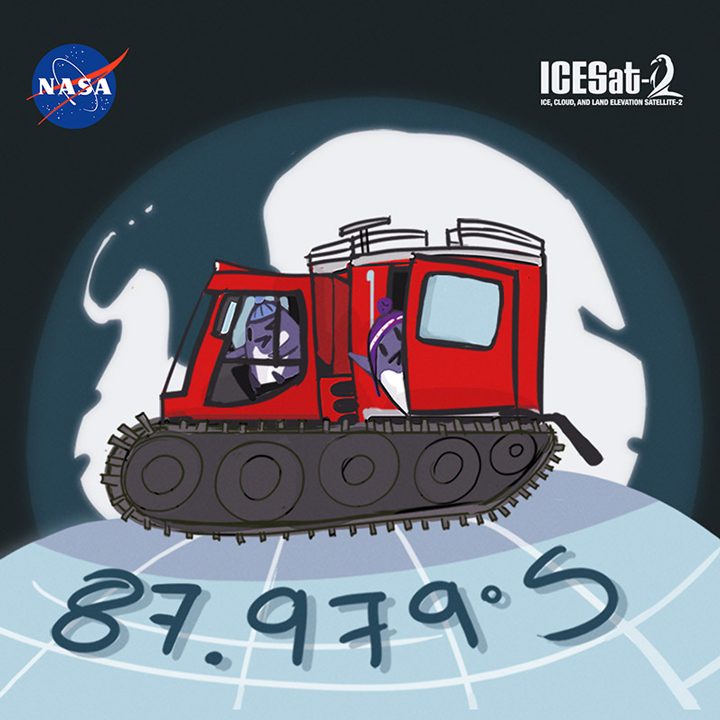 While NSF calls us the 88S project, sometimes you need that extra precision. We’re NASA. (Logo design by Adriana Manrique/NASA)

ICESat-2 is a NASA satellite, scheduled for launch in 2018, that will measure the height of ice sheets, glaciers, and sea ice in unprecedented detail. Designed and built at NASA’s Goddard Space Flight Center, it will carry a laser instrument called the Advanced Topographic Laser Altimetry System (ATLAS). ATLAS will send out small pulses of laser light, and precisely time how long the light takes to travel from the instrument, down to the earth, and back. These measurements, along with the position of ICESat-2 in its orbit, and the direction ATLAS was pointing, allow us to determine the height of Earth’s surface wherever ICESat-2 goes.

But how do we know those measurements from space are correct? We take a sample of measurements on the ground, which we can check against data gathered by the satellite. Which leads us to Antarctica.

The green lines trace the path where data will be collected by the ICESat-2 mission. The tracks come closest to the poles at 88 degrees north and south, forming a dense network of crossing tracks. (NASA’s Scientific Visualization Studio)

Due to the particular orbit of ICESat-2, all the tracks for the satellite converge right around a latitude of 88 degrees south. Our plan is to travel to 88S and collect measurements of the ice sheet elevation around part of the circle at that latitude. We will compare our measurements with those from ICESat-2 shortly after launch to evaluate the performance of the satellite.

Kelly and I left the US last week after months of preparation, and are now en route! The first stop on our journey is Christchurch, New Zealand, where we recalibrate our internal clocks, collect the last of our cold-weather gear, and smell the roses before heading farther south. We are traveling along with science investigators and support staff working through the Antarctic Program of the US National Science Foundation. Christchurch has been the launching point for US (and New Zealand) field work in the Antarctic for decades, and we are grateful for the support of the NSF and our colleagues here in New Zealand. It is a huge advantage to follow in the footsteps of the thousands of other Antarctic program members who have gone before us. 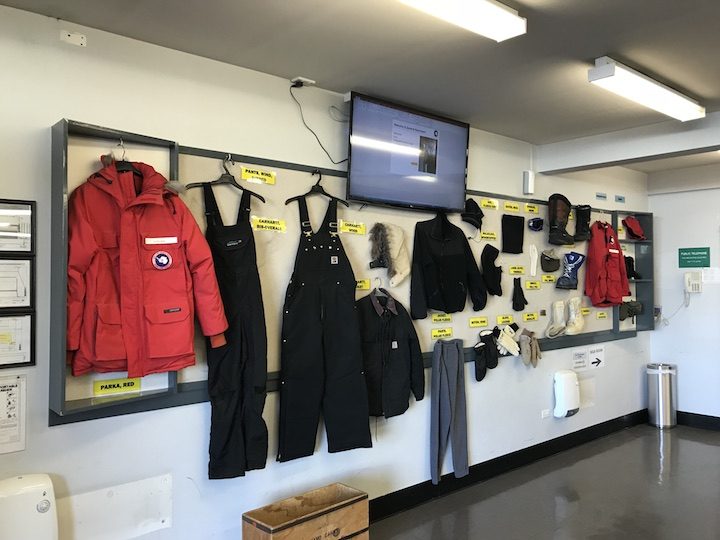 An array of hats, jackets, and gloves are available at the Clothing Distribution Center in Christchurch NZ to keep us warm while we’re down “on the ice.”

As you might imagine, it’ll be cold where we are headed, and having the right clothing is critical. Today, we visited the Clothing Distribution Center to borrow gloves, hats, parkas, and other items to keep us warm and safe. Tomorrow morning, bright and early, we’ll return to the CDC, get kitted up, and head south for McMurdo Station, the U.S. hub of operations in Antarctica.

Fingers crossed, and we’ll report next from Antarctica!

This entry was posted on Monday, December 4th, 2017 at 3:22 pm and is filed under ICESat-2 Antarctic Traverse. You can follow any responses to this entry through the RSS 2.0 feed. Both comments and pings are currently closed.

9 Responses to “Heading South, to New Zealand and Beyond”