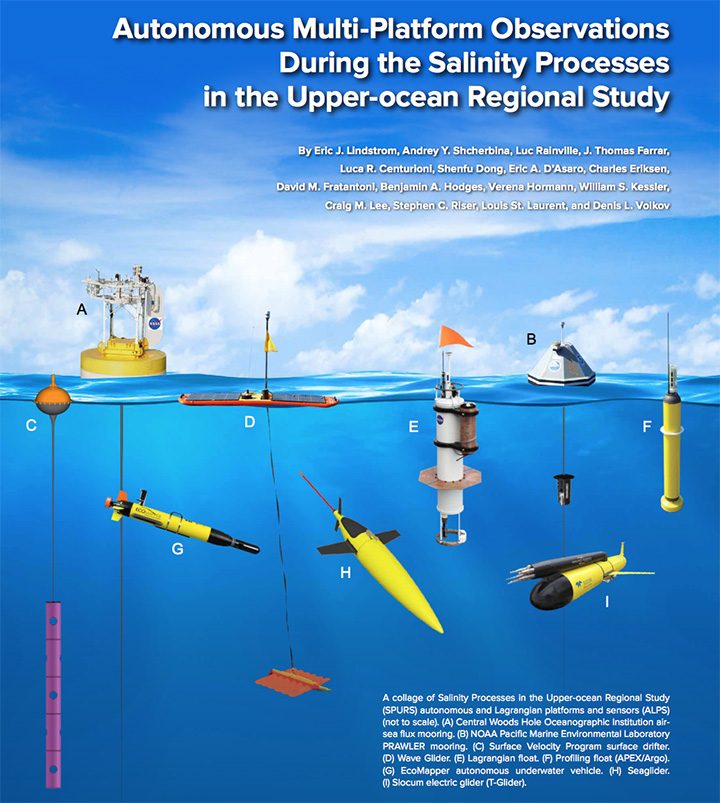 There is a bit of revolution going on in oceanography.  Quite quietly, many new robust autonomous platforms are making ocean observations.  The revolution has been growing for a decade and now feels like a fresh breeze.  Taking humans and ships out of much of the ocean observation loop is enabling new science and pushing aside old ways.  It is preparing us for observational challenges in places humans and ships cannot go.

There was recently published a special issue of Oceanography (the Journal of The Oceanography Society) on Autonomous and Lagrangian Platforms and Sensors (ALPS).  Here autonomous means “without humans aboard” and Lagrangian means “drifting.”  Since ALPS are central to SPURS and the subject of a paper in the special issue, I  thought I would give you the basics of the story.  What motivations lie behind the use of ALPS in SPURS?

Satellite remote sensing enables observation of many surface properties of the ocean and their evolutions (temperature, salinity, and sea level being prime examples from physical oceanography).  Because electromagnetic radiation (light) used for such remote sensing cannot penetrate water, measurements of subsurface properties still require the use of instruments in the water (such as ALPS), deployment mechanisms (such as ships), and oceanographers to design rational deployment strategies.  From its origins, the SPURS program has focused on combining remote-sensing observations with autonomous multi-platform research (See prior blog: Measurements by long-term autonomous platforms in SPURS), continuing NASA’s long tradition of autonomous exploration in challenging remote environments with cutting-edge robotics. 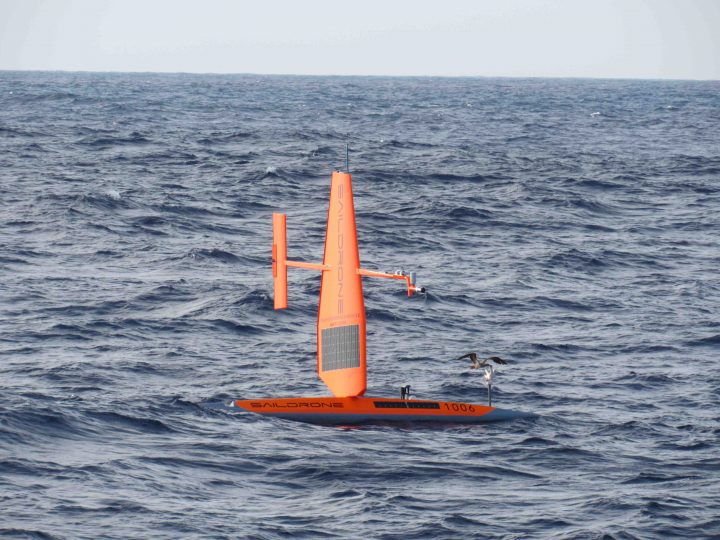 Saildrone with a bird landing.

Shipboard observations in the open ocean are too costly to sustain for than a few weeks; their use is impractical for studying some aspects of seasonal and longer-term evolution of ocean phenomena.  Autonomous drifting (Lagrangian) instruments (See prior blog: Mathematicians from the 18th Century) have a niche in mapping the global ocean circulation and upper ocean properties (e.g. Global Drifter Program and Argo Program).  The drifting assets in SPURS include deployments of drifters and Argo floats that initially contribute to SPURS but then stay on in the water for many years as part of their global arrays.  Mobile autonomous instruments – underwater gliders (See prior blog: Seaglider #189 Away!) or self-propelled surface vehicles (wave, sail, or solar powered) can also provide the capability for sustained and controlled surveys of the upper ocean.  The self-propelled vehicles in SPURS include Seagliders, Slocum Electric Gliders with microstructure, Wavegliders, Ecomappers, and Sail Drones.  For SPURS-2 the focus on the upper few meters of the ocean has necessitated use of autonomous platforms that can sample the ocean well clear of the disturbances of a large ship.

It remains a central challenge of modern physical oceanography to sample the immense range of temporal and spatial scales relevant to determining and predicting the evolution of ocean properties.  Ultimately we need to understand and model, for example, turbulence at microscopic scales, eddies and fronts at kilometer scale, and ocean-basin-spanning currents at 10,000 kilometer scale.  The innovative use of a variety of measurement platforms in SPURS is one example of how different tools, each with its own strengths and weaknesses, can be used in a coordinated fashion to ensure broad-scale coverage while resolving important small-scale processes.  We get the big picture with satellites but must fill in details with networks of ALPS and the occasional “intense look” by a research vessel acting as a mother ship for a concentrated ALPS fleet. 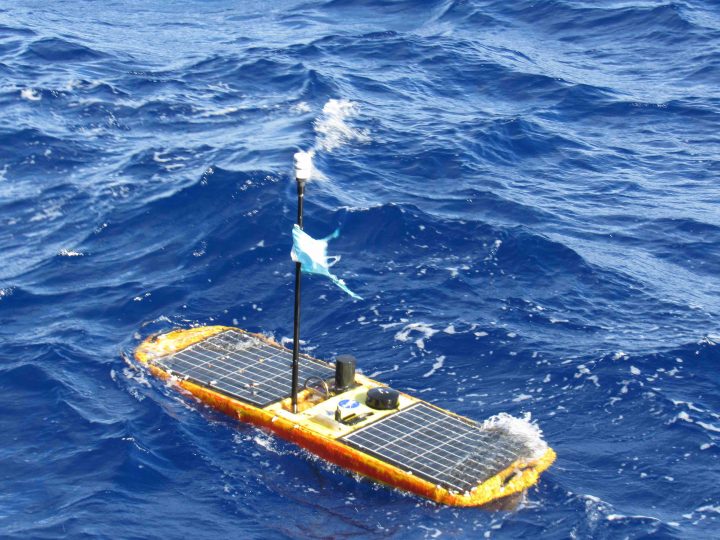 Waveglider ready for recovery after 14 months at sea.

The NASA Physical Oceanography Program is using SPURS to develop effective strategies for sustained ocean observations that use satellites and ALPS together to span the spatial and temporal scales required to address physical processes in the upper ocean – particularly those impacting climate and the water cycle.  Ultimately NASA, in many realms, is working to perfect “smart networks” of disparate instruments – sensor webs you might call them – capable of interaction and self-coordination to achieve research and mission objectives.  Hopefully we learn well how to explore and protect Earth’s ocean before we are called on to design and build an autonomous sensor web to explore another ocean world. Exploration of oceans on Enceladus, Europa, and others may only be decades away, so we better get moving! 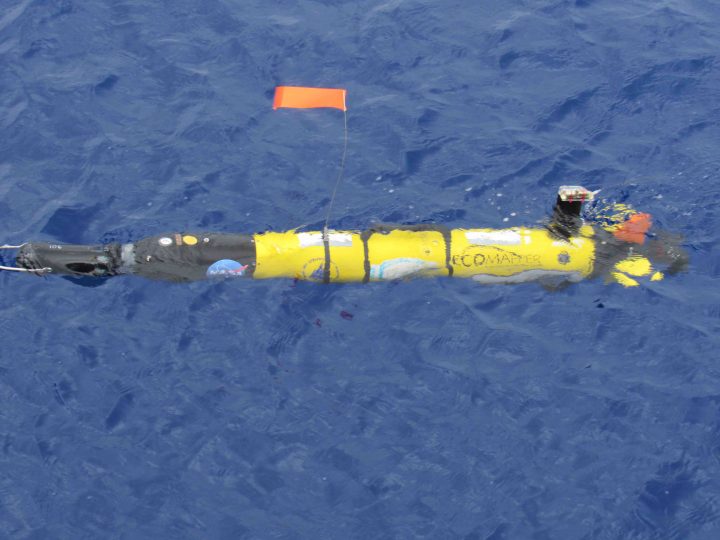 Ecomapper at the ocean surface.

This entry was posted on Wednesday, November 8th, 2017 at 7:44 am and is filed under Salinity Processes in the Upper Ocean Regional Study (SPURS). You can follow any responses to this entry through the RSS 2.0 feed. Both comments and pings are currently closed.