A team of scientists from University of Washington is focusing on long-term observations in SPURS region with autonomous instruments: Argo floats (Drs. Stephen C. Riser, Jeffrey Nystuen, and student Jessica Anderson), Seagliders (Drs. Craig Lee, Charlie Eriksen, and Luc Rainville), and Lagrangian floats (Drs. Eric D’Asaro and Andrey Shcherbina). Their sentinel instruments will provide a larger-scale context for the SPURS moorings for the next year. Jessica (Jesse) and Andrey are aboard Knorr to look after all the deployments. 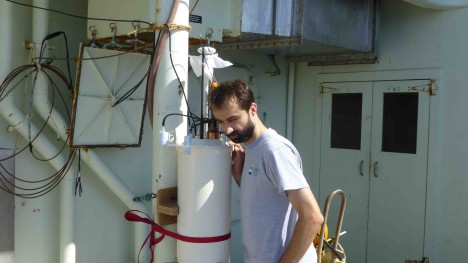 In order to connect the salinity that Aquarius sees at the ocean surface with processes throughout the ocean, SPURS is devoting resources to understanding of the processes happening in the near-surface layer. This area from the surface “skin” of the ocean to depths of 10-20 feet is where salinity measurements are most lacking.

In SPURS we added salinity sensors to normal global surface drifters. Enhanced Argo floats have extra sensors for the top 20 feet of the ocean. These will help to fill this gap in our salinity observations and help us better interpret Aquarius satellite data. SPURS data will be used to better characterize the near-surface variability, structure, and response of temperature and salinity to rain, wind, and ocean currents on time scales of hours to months.

Some of the details are fascinating. Twenty-six Argo-type profiling floats are being deployed over the course of the SPURS expedition and will remain in operation for four to five years. These floats will join the network of over 3,500 Argo floats currently monitoring the world’s oceans. Their additional sensor suites include the Surface Temperature and Salinity (STS) and Passive Acoustic Listener (PAL) packages. To ensure float longevity, typical Argo floats quit collecting data about 20 feet below the sea surface. The STS sensor, however, makes high vertical resolution (about 4 inches, or 10 centimeters) measurements of temperature and salinity from 100 ft depth all the way to the sea surface. The PAL sensor uses a hydrophone to acoustically measure wind speed and rainfall while the float is drifting between vertical profiles. 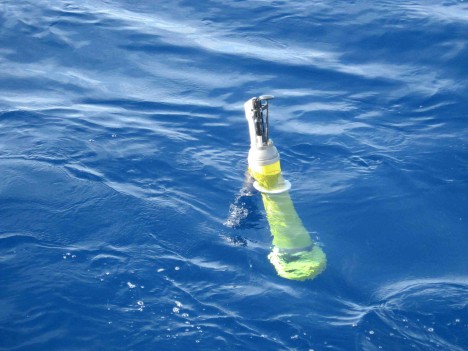 An Argo float at the ocean surface awaiting descent to more than 3,000 feet.

Additionally, the floats use Iridium satellite telemetry so the mission (time, depth, frequency of profiles) of the float can be modified after launch. Currently, sixteen of the floats deployed in a grid around the SPURS central mooring are making synchronous profiles once a day at noon, providing a daily “snapshot” of the SPURS region. In the future, the mission of these floats will be altered once again, so that both diurnal and longer time scale processes can be resolved. 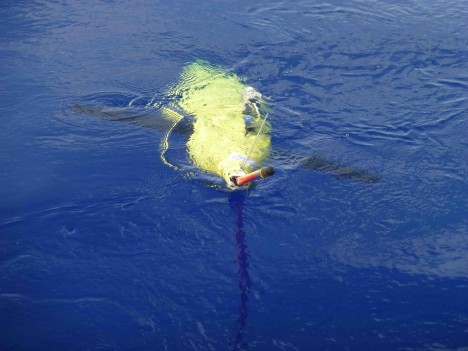 SPURS Seagliders are specially equipped to monitor ocean mixing. The upper ocean is filled with turbulence – chaotic assemblages of eddies that mix warmer and saltier water near the surface with cooler and fresher water below. Seagliders will record minute fluctuations of temperature associated with the tiniest of the turbulent eddies, hundreds of times per second. The gliders will navigate a racetrack pattern around the moorings for the duration of the experiment, allowing us to see how mixing varies with depth and time in response to changing winds, weather patterns, and ocean currents.

The final awesome piece of technology from our Seattle team is the Mixed-layer Lagrangian floats (MLFs) that will characterize turbulent mixing from another perspective. A “Lagrangian” description of a fluid motion (named after mathemetician Joseph Lagrange) is taken from the perspective of particles moving with the fluid flow. In that sense, most floats and drifters are Lagrangian instruments to some extent since they follow ocean currents. MLFs are fully Lagrangian: they can also follow much weaker vertical motion of the water. They do it by closely monitoring surrounding water and changing their volume to remain neutrally buoyant.  They also have a set of six flexible wings that can be extended horizontally and “anchor” the float to the surrounding water. As a result, the MLFs can directly follow the large turbulent eddies in the mixed layer and observe their evolution. It is the interplay of the large and small eddies that controls ocean mixing, so MLF observations uniquely complement microstructure turbulence measurements obtained by Seagliders. 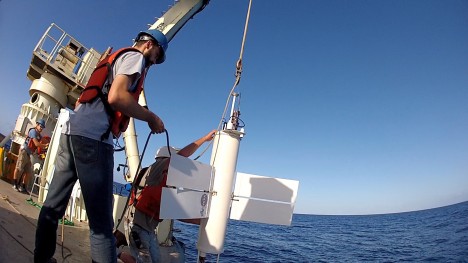 MLF deployment (A.Shcherbina on the line.)

MLF being carefully lowered during deployment. 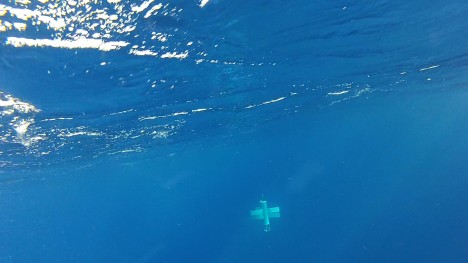 Aboard Knorr, Jesse and Andrey work closely together to support then entire Seattle-based SPURS team. Jesse makes sure the Argo floats get deployed at their appropriate location and will continue to check up on the floats over the coming weeks/years.

Together they look after the gliders testing and deployment – making sure they are well trimmed – not too light, not too heavy – like Goldilocks, everything has to be just right! Once deployed glider operations go to a group of pilots back in Seattle, who will keep track of the gliders’ progress, collect the ocean data, and direct the instruments on their sampling track. We worked with them directly via satellite phone so we could do simultaneous profiles with the ship’s instruments and the glider. When they say “dive” to a glider from Seattle, we can watch from the ship as it slips beneath the waves just yards away!

Lagrangian floats are even more sensitive to the precise ballasting – even the amount of paint that they may wear off over the next year needs to be taken in consideration! However, some things are impossible to predict – such as algal growth or how much fish love the float. So the pilots in Seattle need to keep constant track of the float telemetry and instruct it to go through the ballasting routine on a regular basis. They also balance the sampling strategy to optimize battery life throughout the floats’ one-year deployment. Overall, the operators have remote control of about 300 variables that determine the float’s behavior. Keeping those in check will be Andrey’s job for the next year, once we get him back home.

Your blogger asked Jesse and Andrey to describe their feelings about SPURS. Their responses were superb, so I won’t paraphrase!

Jesse said: “It’s been great to be a part of such a large, well-planned field campaign. I am amazed at all the varied data we are collecting and can’t wait to start piecing a small part of it together to further unravel the ocean’s roll in the global freshwater cycle as part of my PhD work. I am also excited to finally deploy (after a failed attempt on my last research cruise) my first Argo float! Working with the data from these floats for years, it is about time I finally wave one off to begin its journey in the great wild blue yonder. Working in front of your computer screen, it is easy to feel disconnected from the dynamic environment I am trying to understand. So being out a sea is a great rejuvenator. There is a unique beauty that is found only in the middle of the ocean with no land in sight. The stars are that much brighter, the sky that much bigger and the color of the ocean – the most unreal crystalline blue!”

Andrey said: “Taking part in a concerted effort to understand the physics behind the formation of the saltiest water in the open ocean is truly fascinating. The latest technology and support from NASA enables us to study this unique area at an entirely new level. I am looking forward to observing turbulent mixing of heat and salt in the upper ocean as it varies daily, monthly, seasonally. Relating these observations to the pathways of salt and fresh water in the ocean is a fascinating puzzle to unravel. But the best thing is that it is nearly impossible to predict what we will discover, as each new voyage brings in something totally unexpected. I’m sure every scientist aboard Knorr would agree that it is this sense of wonder that keeps us going out to sea again and again.”

This entry was posted on Saturday, October 6th, 2012 at 1:58 pm and is filed under Salinity Processes in the Upper Ocean Regional Study (SPURS). You can follow any responses to this entry through the RSS 2.0 feed. Both comments and pings are currently closed.

2 Responses to “Measurements by long-term autonomous platforms in SPURS”