We just launched the first of our autonomous vehicles – a pink Seaglider with the sexy name of #189. 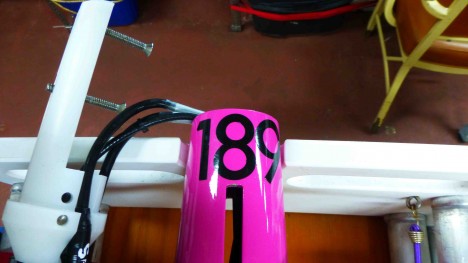 The story of Seaglider 189 begins.

Underwater gliders are the longest-range autonomous undersea vehicles in the oceans by virtue of their very simple propulsion mechanism: the translation of a vertical force into an horizontal one through use of wings. Gliders adjust their buoyancy by alternately inflating and deflating a small swim bladder appended to the vehicle’s body, a mostly rigid pressure hull. A volume variation of only a couple of thousandths of the overall vehicle’s volume is enough to provide an upward or downward buoyancy force that balances a combination of lift and drag forces, resulting in forward and vertical motion, the essence of gliding. Gliders, in effect, use wings as their propellers. 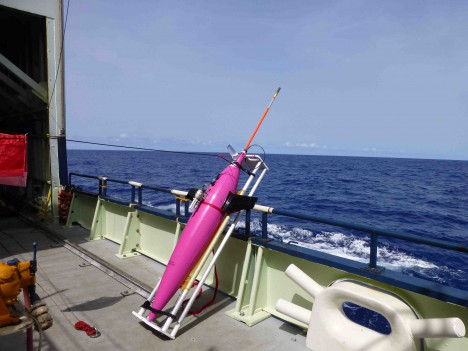 About an hour away from deployment.

Once made heavy, Seagliders sink to a prescribed depth where an electric motor drives a pump to change the vehicle’s density from heavier to lighter than the surroundings, causing them to ascend. They slice through the ocean along sawtooth paths.

The fixed supply of electrical energy aboard the glider in the batteries is used for propulsion and instrument operation. At SPURS we are using gliders in somewhat opposite extremes: some of them (the Slocum gliders — more about them later) are packed with power-needy instruments that limit their mission length to a couple of weeks, while others (Seagliders) direct a greater portion of energy to propulsion and operate a less hungry suite of sensors to achieve the 7-month mission duration required by the SPURS ship schedule.

Gliders were developed to probe the oceans independently of ships. Persistence is their virtue. The Seagliders launched from R/V Knorr are meant to repeatedly survey a limited region of the ocean, every fortnight repeating a 150-nautical mile (480-kilometer) circuit to provide a four-dimensional description of the upper ocean across wide area of ocean centered on the SPURS moored array. Profiles of temperature, salinity, oxygen, chlorophyll fluorescence, and optical backscatter will be transmitted ashore at the end of dive cycles to 0.6 miles (1 km) depth, repeated about thrice daily. 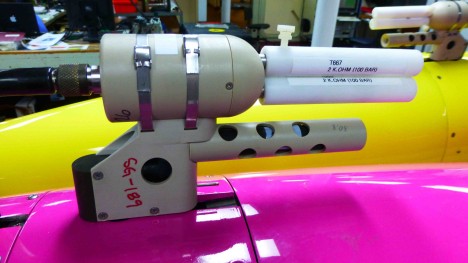 A close-up of Seglider 189’s sensors.

These gliders are completely autonomous once submerged, until they make a call over the Iridium satellite network to report data collected and accept new instructions from ashore controllers that manage everything, from flight to sampling strategy. They steer toward instructed target positions by moving the battery pack to one side or the other, inducing a vehicle roll that results in a turn. They follow a calculated compass heading to approach each target and, once there, dive toward the next. Seagliders even predict the effects of currents on their progress to choose an efficient heading with which to approach the next target. Vehicle pitch is similarly controlled during flight and the nose is depressed at the sea surface to raise the trailing antenna above the waves to gather position information and communicate.

In addition to the standard suite of measurements, the SPURS Seagliders are carrying brand new temperature microstructure probes. These are intended to measure turbulence in the upper ocean over nearly 2000 km (more than 1000 nautical miles) of track through the ocean by each vehicle on each mission. The hope is that upper ocean turbulence, long exclusively measured by ship surveys, will in SPURS be extended over the course of a year in autonomous surveys. The salinity and temperature profiles collected by more conventional aboard instrumentation, together with turbulence profiles, will reveal where the ocean mixes with respect to the myriad fronts and eddies to be encountered in the SPURS region. 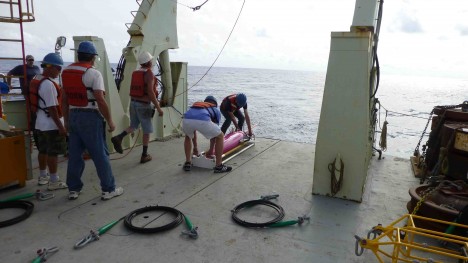 Members of the SPURS team, ready to deploy the Seaglider. 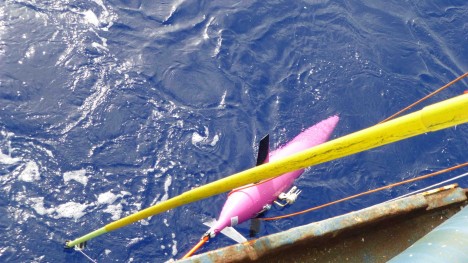 Finally, to answer the inevitable question: to what does Seaglider #189 owe its garish color? The original project engineer in Seaglider development, Jim Osse, had some paint left over from a human powered submarine contest his University of Washington team entered in Florida. He chose the hue selected by the customer ahead of him at the counter of a Seattle auto parts store, destined for a 1942 Ford Coupe (and, it turns out, a bevy of Seagliders, too): Hot Rod Pink. We are hoping that #189 stays in the pink and safely hot rods around the ocean until recovered next March!

This entry was posted on Friday, September 14th, 2012 at 4:55 pm and is filed under Salinity Processes in the Upper Ocean Regional Study (SPURS). You can follow any responses to this entry through the RSS 2.0 feed. Both comments and pings are currently closed.